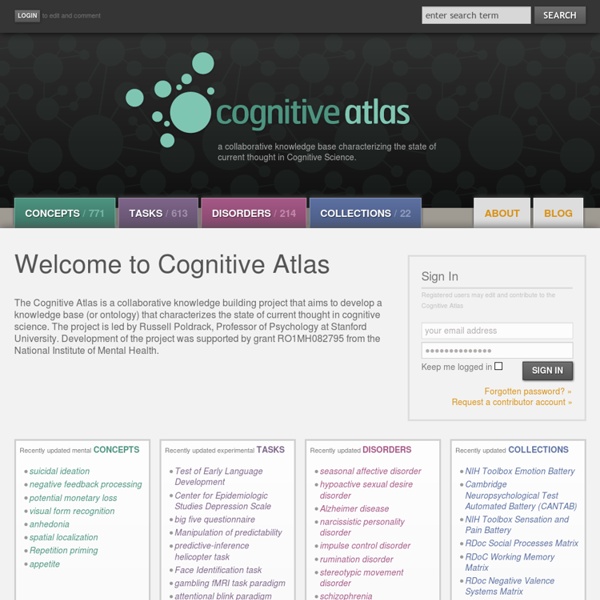 The Cognitive Atlas is a collaborative knowledge building project that aims to develop a knowledge base (or ontology) that characterizes the state of current thought in cognitive science. The project is led by Russell Poldrack, Professor of Psychology and Neurobiology at the University of Texas at Austin in collaboration with the UCLA Center for Computational Biology (A. Toga, PI) and UCLA Consortium for Neuropsychiatric Phenomics (R. Bilder, PI). It is supported by grant RO1MH082795 from the National Institute of Mental Health. You appear to be using an older version of Internet Explorer.

When Complex Trauma Is Misdiagnosed as Anxiety 3K+Save I’ve been living with the effects of complex trauma for a long time, but for many years, I didn’t know what it was. Off and on throughout my life, I’ve struggled with what I thought was anxiety and depression. Or rather, In addition to being traumatized, I was anxious and depressed. Regardless of the difference, no condition should ever be minimized. If you are feeling anxious or depressed, it’s important and urgent to find the right support for you.

Complex (psychology) For alternate usage, see complexity. A complex is a core pattern of emotions, memories, perceptions, and wishes in the personal unconscious organized around a common theme, such as power or status (Schultz, D. & Schultz, S., 2009). Primarily a psychoanalytic term, it is found extensively in the works of Carl Jung and Sigmund Freud. Guidance currently being updated Please note the Commission is currently reviewing and updating all of its non statutory guidance in order to reflect recent changes in the law. Therefore the documents on this page are being updated and will be placed onto the main areas of the site as these updates are made. Guidance for Employers Guidance for Business Your role as an employer under the Equality Act (PDF | Word)Your role as a service provider under the Equality Act (PDF | Word)

Brain Waves The human brain is more complex than your scientists suspect. They are busily mapping where certain functions occur, and how parts of the brain activate in syncronicity. They know that parts of the brain, near the stem, are older than, for instance, the forebrain, and that a human can survive remarkably well with only half a brain, as long as that half is either the right or left, intact. But what your scientists do not know is that beyond the old brain and the new, the subconscious and the conscious, the right and the left halves - there are yet more subdivisions of the human brain. Where it is known that the brain seems to specialize in activity that requires Beta frequency brain waves during wakefulness, and Alpha frequency waves during sleep or meditation, and Theta waves during rage, and Delta waves in coma - no one is quite sure why. We will tell you.

Psst! The Human Brain Is Wired For Gossip hide captionLearning juicy details about someone can change the way you see them — literally, according to a new study. August Darwell/Getty Images Hearing gossip about people can change the way you see them — literally. Negative gossip actually alters the way our visual system responds to a particular face, according to a study published online by the journal Science. The findings suggest that the human brain is wired to respond to gossip, researchers say. And it adds to the evidence that gossip helped early humans get ahead. Visual and Auditory Processing Disorders By: National Center for Learning Disabilities (NCLD) Introduction Visual and auditory processing are the processes of recognizing and interpreting information taken in through the senses of sight and sound. The terms, "visual and auditory processing" and "visual and auditory perception", are often used interchangeably. Although there are many types of perception, the two most common areas of difficulty involved with a learning disability are visual and auditory perception.

Myers-Briggs Type Indicator Model of personality types A chart with descriptions of each Myers–Briggs personality type and the four dichotomies central to the theory The Myers–Briggs Type Indicator (MBTI) is an introspective self-report questionnaire indicating differing psychological preferences in how people perceive the world and make decisions.[1][2][3] The original versions of the MBTI were constructed by two Americans, Katharine Cook Briggs and her daughter Isabel Briggs Myers.[4] The MBTI is based on the conceptual theory proposed by Swiss psychiatrist Carl Jung,[5] who had speculated that people experience the world using four principal psychological functions – sensation, intuition, feeling, and thinking – and that one of these four functions is dominant for a person most of the time.[6] The four categories are Introversion/Extraversion, Sensing/Intuition, Thinking/Feeling, Judging/Perception. Each person is said to have one preferred quality from each category, producing 16 unique types.

Matthew effect For unto every one that hath shall be given, and he shall have abundance: but from him that hath not shall be taken even that which he hath. Sociology of science[edit] In the sociology of science, "Matthew effect" was a term coined by Robert K. Merton to describe how, among other things, eminent scientists will often get more credit than a comparatively unknown researcher, even if their work is similar; it also means that credit will usually be given to researchers who are already famous.[3][4] For example, a prize will almost always be awarded to the most senior researcher involved in a project, even if all the work was done by a graduate student. This was later formulated by Stephen Stigler as Stigler's law — "No scientific discovery is named after its original discoverer" — with Stigler explicitly naming Merton as the true discoverer, making his 'law' in example of itself. Examples[edit]

Carl Jung Carl Gustav Jung (/jʊŋ/; German: [ˈkarl ˈɡʊstaf jʊŋ]; 26 July 1875 – 6 June 1961), often referred to as C. G. Jung, was a Swiss psychiatrist and psychotherapist who founded analytical psychology.[2] Jung proposed and developed the concepts of the collective unconscious, archetypes, and extraversion and introversion. His work has been influential not only in psychiatry but also in philosophy, anthropology, archeology, literature, and religious studies.