The benefits of meditation 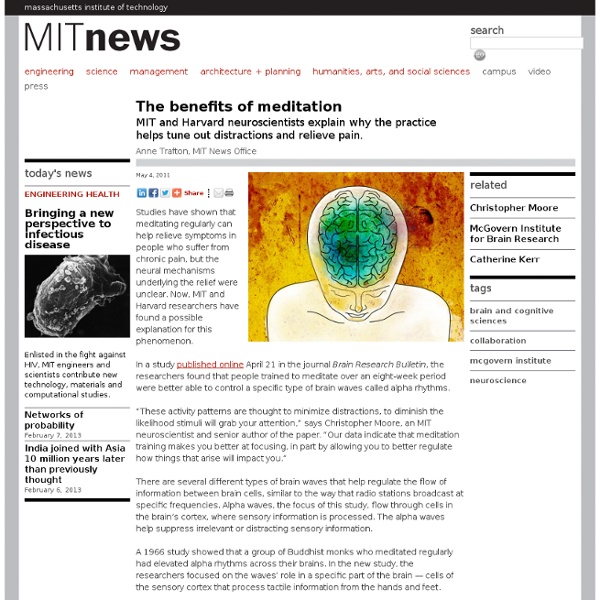 Studies have shown that meditating regularly can help relieve symptoms in people who suffer from chronic pain, but the neural mechanisms underlying the relief were unclear. Now, MIT and Harvard researchers have found a possible explanation for this phenomenon. In a study published online April 21 in the journal Brain Research Bulletin, the researchers found that people trained to meditate over an eight-week period were better able to control a specific type of brain waves called alpha rhythms. “These activity patterns are thought to minimize distractions, to diminish the likelihood stimuli will grab your attention,” says Christopher Moore, an MIT neuroscientist and senior author of the paper. “Our data indicate that meditation training makes you better at focusing, in part by allowing you to better regulate how things that arise will impact you.” A 1966 study showed that a group of Buddhist monks who meditated regularly had elevated alpha rhythms across their brains.

Blog » Blog Archive » 23 Surprisingly Effective Treatments for Depression (One Year Later) For the live-updated, interactive version of this infographic, click here. A year ago, we published one of our most popular findings – 6 surprisingly effective treatments for depression. I went ahead and repeated the analysis today, and now we have 23 treatments in the “surprisingly effective” category for depression. The Meaning of Namaste What does "Namaste" mean? My yoga teacher says it every week after our practice and I've always wanted to know. —Rita Geno Making Mouse Memories In the movie Eternal Sunshine of the Spotless Mind, scientists erase troubling memories from Jim Carrey’s head. In real life, scientists have done the opposite. By reactivating certain nerve cells, researchers make artificial memories pop into mice’s heads. The results, published in the March 23 Science and online March 22 in Nature, offer a deeper understanding of how the brain creates and uses memories. Much of what scientists know about how the brain remembers comes from studies that look for signs of natural memories in the brain or that disrupt memories. In the new work, memories are actually created, says neuroscientist Richard Morris of the University of Edinburgh in Scotland.

Scientists discover how the brain encodes memories at a cellular level (Santa Barbara, Calif.) –– Scientists at UC Santa Barbara have made a major discovery in how the brain encodes memories. The finding, published in the December 24 issue of the journal Neuron, could eventually lead to the development of new drugs to aid memory. The team of scientists is the first to uncover a central process in encoding memories that occurs at the level of the synapse, where neurons connect with each other. "When we learn new things, when we store memories, there are a number of things that have to happen," said senior author Kenneth S. Spirit Vaults : Meditation - Essay It seems everyone is interested in meditation...talking about the wonderful benefits, recommending classes and discussing the different ways to "do it". But, for a beginner, just what is "it"? And how do you do "it"? Our busy, hectic, lifestyles may seem to prohibit this peaceful practice, or provide a convenient "excuse" not to begin, or continue, to meditate...but, the happy news is, you CAN successfully benefit even if you practice for short periods. With the simple technique described below, you will begin and incredible journey. There are 100's of styles, traditions and forms of meditation, but this simple practice has always been highly recommended.

Brain-training games stop depression before it starts - health - 01 November 2011 It may be possible to stave off depression before it even appears using brain-training software so simplistic in its design that even the psychologist testing it once bet it wouldn't work. Ian Gotlib's group at Stanford University, California, studies girls aged 10 to 14 years whose mothers suffer from depression. Such girls are thought to be at higher-than-normal risk of developing the condition themselves, in part because they may inherit their mothers' tendency to "amplify" unpleasant information. Although none of the girls has yet experienced a depressive episode, Gotlib has found that their brains already overreact to negative emotional stimuli – a pattern they share with their mothers and other depressed people. Gotlib is studying whether these young subjects can use interactive software and brain-imaging hardware to "rewire" their brains by unlearning this negative bias.

LoveToKnow When you're new to the study of yoga, Namaste is one of those terms that might cause confusion. Typically, you'll hear your instructor and classmates use this phrase several times. But, its meaning is seldom clearly defined for the novice yoga student. The Meaning of Namaste Stephen Cave - Stayin' alive A group of American psychologists has discovered a simple way of turning ordinary people into fundamentalists and ideologues. Their method requires neither indoctrination nor isolation nor any form of brainwashing; indeed, it can be done anywhere and in a matter of minutes. It is just this: the researchers remind these ordinary folks that they will one day die.