How to increase serotonin in the human brain without drugs 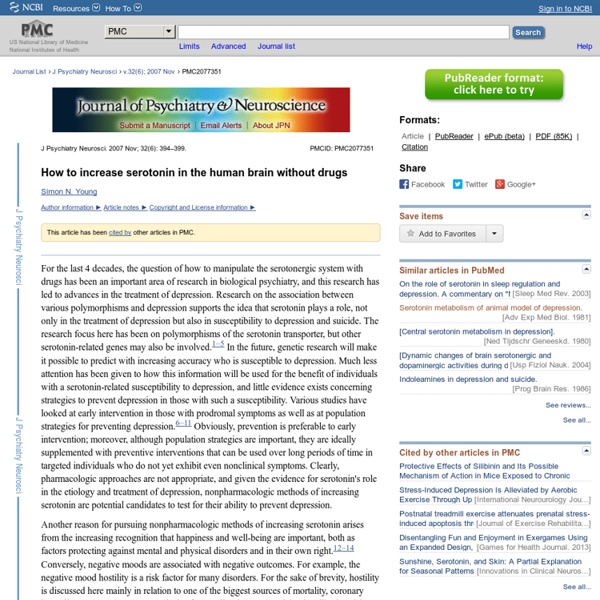 For the last 4 decades, the question of how to manipulate the serotonergic system with drugs has been an important area of research in biological psychiatry, and this research has led to advances in the treatment of depression. Research on the association between various polymorphisms and depression supports the idea that serotonin plays a role, not only in the treatment of depression but also in susceptibility to depression and suicide. The research focus here has been on polymorphisms of the serotonin transporter, but other serotonin-related genes may also be involved.1–5 In the future, genetic research will make it possible to predict with increasing accuracy who is susceptible to depression. Much less attention has been given to how this information will be used for the benefit of individuals with a serotonin-related susceptibility to depression, and little evidence exists concerning strategies to prevent depression in those with such a susceptibility.

Related:  The human brain and the mind • other • à voir (docs) • Science • Health

Brain mechanism recruited to reduce noise during challenging tasks New research reveals a sophisticated brain mechanism that is critical for filtering out irrelevant signals during demanding cognitive tasks. The study, published by Cell Press in the February 26 issue of the journal Neuron, also provides some insight into how disruption of key inhibitory pathways may contribute to schizophrenia. "The ability to keep track of information and one's actions from moment to moment is necessary to accomplish even the simple tasks of everyday life," explains senior study author, Dr.

Types of Sound Healing Techniques and the Benefits of Sound Therapy The concept of sound healing as an alternative medicine might raise some eyebrows. After all, it is a little hard to understand how sound waves and vibration can help your body heal. But this alternative method of healing indeed works. Let’s take musical sound, for example. Music has long been known to be therapeutic and has been used as a sound healing technique since ancient times. Greek philosophers have attested to its healing powers.

Facial Action Coding System Muscles of head and neck. Facial Action Coding System (FACS) is a system to taxonomize human facial movements by their appearance on the face, based on a system originally developed by a Swedish anatomist named Carl-Herman Hjortsjö.[1] It was later adopted by Paul Ekman and Wallace V. Friesen, and published in 1978.[2] Ekman, Friesen, and Joseph C. This Image Can Trick Your Brain And Make You See It In Color Perception is a fickle thing. As good as our senses are at keeping us alive, they can often mislead and deceive us. Here’s a great example of that which you can try at home, featured in the new BBC Four series, Colour: The Spectrum of Science. Check out the video below, follow the instructions and see a black and white image turn into a full-color image of a landscape. It’s all to do with our cone cells, one of the two types of photoreceptors within our eye’s retina, which are responsible for color vision.

Clear Advice on Eye Diseases The only way to cure cataracts­—a clouding of the lens of the eye that impairs vision­—is with surgery to replace the bad lens with an artificial one. Though the procedure is very safe and effective, some doctors recommend needless tests or push newer types of lenses that pose risks. Skip unneeded presurgery tests Cataract surgery, usually performed as an outpatient procedure, requires only a local anesthetic to numb your eye. Research shows that for most people the only pre-op requirements are that you be free of infection and have normal blood pressure and heart rate. Yet many doctors routinely order other tests, including blood counts and electrocardiograms, as would be necessary before a major procedure.

The Brain's Dark Energy Imagine you are almost dozing in a lounge chair outside, with a magazine on your lap. Suddenly, a fly lands on your arm. You grab the magazine and swat at the insect. What was going on in your brain after the fly landed? Make the strongest ANTIBIOTIC and ANTICANCER drug at home The desire and pursuit for natural health solutions led us to recommendations for another great recipe that you can easily make and try. It is called the “golden mixture”, a natural remedy that helps in the fight against bacteria and viral infections, allergic problems, especially seasonal. It’s a very important tool for strengthening the immune system and also a great ingredient for a prevention of cancer. If all these sounds pretentious, you should look at the new scientific studies and it will become clear why the “golden mixture” is so powerful as indicated above.