The Dark Side of Oxytocin, the Hormone of Love - Ethnocentrism 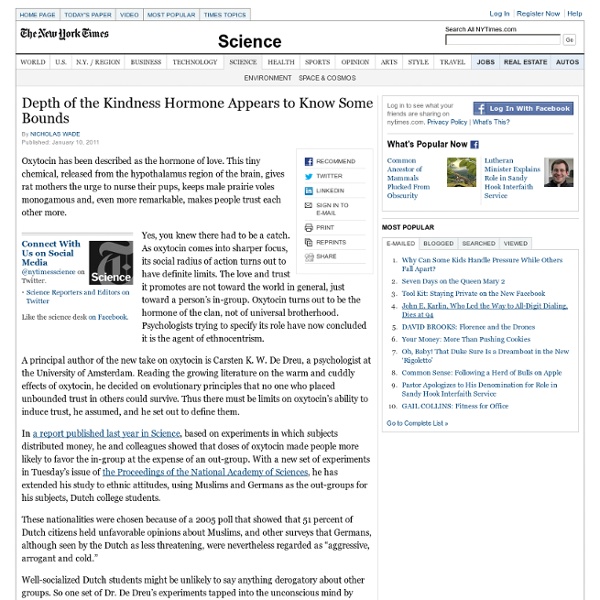 Yes, you knew there had to be a catch. As oxytocin comes into sharper focus, its social radius of action turns out to have definite limits. The love and trust it promotes are not toward the world in general, just toward a person’s in-group. Oxytocin turns out to be the hormone of the clan, not of universal brotherhood. Psychologists trying to specify its role have now concluded it is the agent of ethnocentrism. A principal author of the new take on oxytocin is Carsten K. In a report published last year in Science, based on experiments in which subjects distributed money, he and colleagues showed that doses of oxytocin made people more likely to favor the in-group at the expense of an out-group. These nationalities were chosen because of a 2005 poll that showed that 51 percent of Dutch citizens held unfavorable opinions about Muslims, and other surveys that Germans, although seen by the Dutch as less threatening, were nevertheless regarded as “aggressive, arrogant and cold.” In Dr. Dr.

The Psychopath: The Mask of Sanity THE PSYCHOPATH - The Mask of Sanity Special Research Project of the Quantum Future School Imagine - if you can - not having a conscience, none at all, no feelings of guilt or remorse no matter what you do, no limiting sense of concern for the well-being of strangers, friends, or even family members. Imagine no struggles with shame, not a single one in your whole life, no matter what kind of selfish, lazy, harmful, or immoral action you had taken. And pretend that the concept of responsibility is unknown to you, except as a burden others seem to accept without question, like gullible fools.

10 Practical Uses For Psychological Research in Everyday Life People love to give each other advice. The web is full to bursting with all types of pseudo-psychological advice about life. The problem is, how much of this is based on real scientific evidence? Well, here on PsyBlog we’ve got the scientific evidence. So here’s my top 10 list of what you can learn practically from the psychological research discussed here recently. Psychopaths vs. Sadists: Brain Science, Public Fascination Psychopathic serial killers are a source of infinite public fascination. If best-selling novels, hit TV series and popular films are any indication, you’d think real-life Hannibal Lecters were constantly running amok in the U.S. Thankfully, such offenders are far less prevalent in reality than they are in entertainment — but the disproportionate damage done by violent and even nonviolent psychopaths not surprisingly attracts intense scientific interest as well. On May 11, in fact, the New York Times explored whether psychopaths can be diagnosed as young as age 9.

Brain Abnormalities Found in Narcissists Narcissistic Personality Disorder Basics The American Psychiatric Association categorizes narcissistic personality disorder with a group of conditions called Cluster B personality disorders. All of these disorders produce behaviors or thought processes that rely to a dysfunctional degree on emotional excess or drama. People affected by NPD do such things as focus their lives around self-centered pursuits, greet criticism with outsized or excessive emotional displays, manipulate others for their own purposes, redirect other people’s attention toward themselves, make unsupported boasts or exaggerations, expect others to treat them as superiors or “betters,” and develop heavily involved fantasies centered on unfounded notions of their own abilities or achievements. Unusual Brain Thinness In the study published in the Journal of Psychiatric Research, a team of German researchers used modern brain scanning technology to examine the brain structure of 34 volunteers.

Soulmates In Hell: WORDS YOU SHOULD KNOW: DOSING Dosing is a form of love bombing that takes place long after the honeymoon phase, and during the abuse phase of the relationship, but before the discard. The narcissist seeks to keep you hooked as long as possible because you still have usefulness to the narcissist, for instance, as a part of the narcissist's harem, to prop up his image outside the home, as arm candy, as a source of money, as an unpaid baby sitter, or simply as a person the narcissist enjoys abusing. The narcissist doses you by giving you small amounts of the “three A's”...attention, appreciation, and affection in order to keep your hope up that the good times you experienced at the beginning will return for good. It differs from the love bombing phase in that it's motive is different...to prolong your involvement and agony...and because of it's limited nature.

Narcissistic Hoovering is a Timeless Control Tactic To a narcissist, hoovering is a timeless tactic for controlling a target, validating that control, and periodically checking an ex’s queue-status. And when I say “timeless”, I mean TIMELESS as in time is of NO consequence…time is NOT of the essence…time never runs out…and there’s no time like now to hoover “whomever I want because, well, I want to and because I have all the time in the world!” Now, while the average person reading this (who knows nothing about narcissism in relationships) might ask What the fuck is she talking about?, I’m willing to bet that all my experienced comrades here know where I’m going with this. If you don’t, bear with me and you will in a minute.

The Split Brain Experiments Lists of Nobel Prizes and Laureates The Split Brain Experiments Play the Split Brain Experiments About the game Anatomy Of A Psychopath : The Neurobiological Basis Of Evil Editor’s Note: This is the first part of “Mind’s Matter”, a new series of articles by Dr. Jonathan Pararajasingham, exploring the Neurobiological basis of behaviour. “We serial killers are your sons, we are your husbands, we are everywhere.” – Ted Bundy One of the most controversial areas of research in neuroscience involves the search for biophysical causes of sadistic thought and behaviour. But there now seems to be enough complementary evidence to at least begin piecing together a coherent materialistic description of the psychopathic mind. A number of potential genetic and pathophysiological causes of violence and aggression have been investigated over recent years.