How the Brain Stops Time 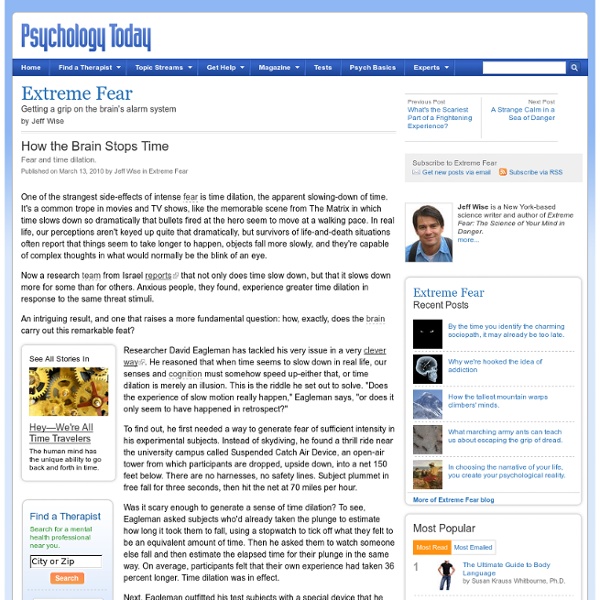 One of the strangest side-effects of intense fear is time dilation, the apparent slowing-down of time. It's a common trope in movies and TV shows, like the memorable scene from The Matrix in which time slows down so dramatically that bullets fired at the hero seem to move at a walking pace. In real life, our perceptions aren't keyed up quite that dramatically, but survivors of life-and-death situations often report that things seem to take longer to happen, objects fall more slowly, and they're capable of complex thoughts in what would normally be the blink of an eye. Now a research team from Israel reports that not only does time slow down, but that it slows down more for some than for others. Anxious people, they found, experience greater time dilation in response to the same threat stimuli. An intriguing result, and one that raises a more fundamental question: how, exactly, does the brain carry out this remarkable feat? Was it scary enough to generate a sense of time dilation?

Do you really need more time? The single biggest “push back” I get from people when I share about how building practices into their life can unleash new ideas and help them be more productive goes something like this: “Yeah, that’s great, but I really just don’t have the time.” After collecting myself, I reply…Did you at any point in the last week: Watch TV? Read for pleasure? Check Facebook/Twitter? 6 ways to teach growth mindset from day one of school Imagine if your new class this fall was full of students who would: Be willing to try new thingsStick with hard tasks and not give upPush themselves to do their best work, not just what’s “good enough”Believe in themselves and their own ability to learn Here’s the great news–these are traits that we can help develop in our students by teaching them about how their brains work.

How To Treat Others: 5 Lessons From an Unknown Author Five Lessons About How To Treat People -- Author Unknown 1. First Important Lesson - "Know The Cleaning Lady" During my second month of college, our professor gave us a pop quiz. Autism and Neuropsychology, by Marisa Marzillo Autism is a lifelong disorder that has become the discussion of many media outlets; it is a disorder that causes abnormal neurological development. It seems that lately autism prevalence is increasing, which is causing a demand for professionals to investigate on what causes autism. Autism disorder is characterized by different behavior including social impairments, difficulty in communication, and restrictive patterns of behavior. Individuals living with autism don’t have a lower IQ than most people, but it is common that they have weak social interaction. Researchers have stated that it is unclear what causes autism; it ranges from environmental surroundings to a strain on normal brain development. The three main subjects that researchers have said are a cause of autism are brain development, genes, and environmental.

Highly Sensitive People Emotional Problems - Are You Too Sensitive Photo Credit: George Doyle/Stockbyte Many years ago I had a falling-out with a girlfriend that proved so painful, I can hardly talk about it today. My friend (let's call her Mary) was a colorful television personality and had the world at her feet. She was engaged to a handsome European, and her face was plastered across the newspapers. I was working for 60 Minutes at the time, and we often met for lunch. The Tail End We made a fancy PDF of this post for printing and offline viewing. Buy it here. In a post last year, we laid out the human lifespan visually. Guided mindfulness and yoga programs from world-class trainers. Whether you're wanting to be more present as a partner or parent, an executive building a more compassionate performance culture, or just someone who wants to enjoy life more and be less stressed, you'll find fun, guided real-time sessions to help you get there. Each program is developed for specific health, work, and relationship outcomes. Our NOW program includes 450+ sessions of mindfulness meditation and yoga training for adults. We collaborated with the world's best trainers to help you get the most out of life.

Revenge of the Introvert There are as many introverts as extraverts, but you'd never know it by looking around. Introverts would rather be entertained by what's going on in their heads than in seeking happiness. Their big challenge is not to feel like outsiders in their own culture. by Laurie Helgoe, Ph.D. Chapter 12: Attention and Consciousness Attention involves top-down (voluntary) goal-directed processes and bottom-up (reflexive), stimulus-driven mechanisms. They influence the way information is processed in the brain and can occur early during sensory processing. Balint's syndrome is a visual attention and awareness deficit. Someone who has this syndrome can only perceive one object at a time. Theoretical Models of AttentionAttention is defined as the ability to attend to somethings while ignoring others.

Revenge of the Introvert After ten years as a psychologist practicing psychodynamic psychotherapy , I reclined on the couch of my own analyst feeling burdened by my chosen work. After a day of seeing patients, I was drained. I had been trained to listen at many levels—words, emotions, unconscious disclosures—and I took all of that in and sorted it out in my mind. I was good at helping others discover and pursue what they wanted out of life. Chronocentrism Chronocentrism is the assumption that certain time periods (typically the present) are better, more important, or a more significant frame of reference than other time periods, either past or future. The perception of more positive attributes such as morality, technology, and sophistication to one's own time could lead an individual as a member of a collectivity to impose their forms of time on others and impede the efforts towards more homogeneous temporal commons.[1] History[edit]

Out of Body Experience Guided Meditation There are many different types of techniques and meditations. Use the ones you gravitate towards and stay with it until you achieve traveling into the astral planes. From a personal standpoint, I highly recommend turning off your cell phone.

Want to Know If Someone Likes You? Ever wondered if someone you're attracted to likes you or not, whether someone is your friend or foe, or whether your employees respect you? There's an easy way to find out... try to make them laugh . If the laughter comes easy, the answer is likely yes. If it doesn't, the answer is likely no. How Our Brains Make Memories Sitting at a sidewalk café in Montreal on a sunny morning, Karim Nader recalls the day eight years earlier when two planes slammed into the twin towers of the World Trade Center. He lights a cigarette and waves his hands in the air to sketch the scene. At the time of the attack, Nader was a postdoctoral researcher at New York University. He flipped the radio on while getting ready to go to work and heard the banter of the morning disc jockeys turn panicky as they related the events unfolding in Lower Manhattan.