This Is Your Brain on Metaphors 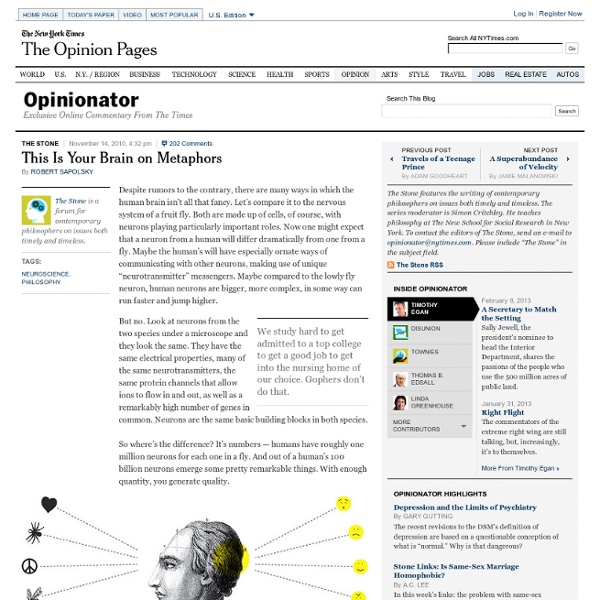 Unlearning and The Stockholm Effect The stories I’ve read have all given me much food for thought, so much so that I couldn’t possibly say it all in a few pages. The most striking thing about these seven stories, to me, is that these writers all did well in school, come from middle-class families, and yet discovered (or "unlearned"), on their own, that school has limited rather than expanded their learning abilities. Why, I wonder, aren’t more people questioning school as these writers have? Once one reaches compulsory school age in any country, the process of schooling is identical: our natural urge to learn and explore is controlled and measured on a daily basis, and universal compulsory school attendance laws make it hard for alternatives to school to emerge. In August, 1973, two ex-convicts held three women and a man hostage during a robbery in Stockholm, Sweden. We tell our children that their current and future success in life depends on pleasing their teachers and thereby doing well in school.

What is Swaraj? What Is Swaraj? The concept of swaraj, or self-rule, was developed during the Indian freedom struggle. In his book Hind Swaraj (1909), Gandhi sought to clarify that the meaning behind swaraj was much more than simply "wanting [systems of] English rule without the Englishman; the tiger's nature but not the tiger." The crux of his argument centered on the belief that the socio-spiritual underpinnings of British political, economic, bureaucratic, legal, military, and educational institutions were inherently unjust, exploitative and alienating. As Pinto explicates, "The principal theme of Hind Swaraj is the moral inadequacy of western civilization, especially its industrialism, as the model for free India." On another level, the call for swaraj represents a genuine attempt to regain control of the 'self' - our self-respect, self-responsibility, and capacities for self-realization - from institutions of dehumanization. How is this relevant for us today?

Thought Reform and the Psychology of Totalism Thought Reform and the Psychology of Totalism: A Study of "Brainwashing" in China is a non-fiction book by psychiatrist Robert Jay Lifton on the psychology of brainwashing and mind control. Lifton's research for the book began in 1953 with a series of interviews with American servicemen who had been held captive during the Korean War. In addition to interviews with 25 Americans, Lifton also interviewed 15 Chinese who had fled their homeland after having been subjected to indoctrination in Chinese universities. From these interviews, which in some cases occurred regularly for over a year, Lifton identified the tactics used by Chinese communists to cause drastic shifts in one's opinions and personality and "brainwash" American soldiers into making demonstrably false assertions. Main points[edit] In the book, Lifton outlines the "Eight Criteria for Thought Reform": Milieu Control. Thought-terminating cliché[edit] Lifton said:[4][5] Examples[edit] General examples “Think of the children”

Think of the children "Think of the children" (also "What about the children?") is a phrase that evolved into a rhetorical tactic.[1][2][3] Used literally it to refers to children's rights, as in discussions of child labor.[4][5][6] In debate, this plea for pity is wielded as an appeal to emotion which can constitute a logical fallacy.[1][2][3] Art, Argument, and Advocacy (2002) argued the exhortation may supplant emotion for reason in debate.[1] Ethicist Jack Marshall wrote in 2005 that the phrase's popularity stemmed from its capacity to stunt rationality, particularly discourse on morals.[2] "Think of the children" was invoked by censorship proponents to shield children from perceived dangers.[7][8] Community, Space and Online Censorship (2009) noted that classifying children in an infantile way as innocents in need of protection was a form of obsession over the concept of purity.[7] A 2011 article in the Journal for Cultural Research observed the term grew out of a moral panic.[9] Background[edit]