The fine dopamine line between creativity and schizophrenia 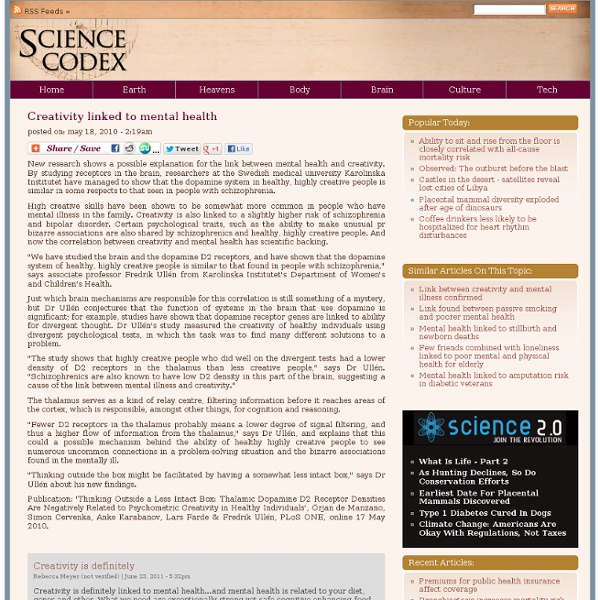 New research shows a possible explanation for the link between mental health and creativity. By studying receptors in the brain, researchers at the Swedish medical university Karolinska Institutet have managed to show that the dopamine system in healthy, highly creative people is similar in some respects to that seen in people with schizophrenia. High creative skills have been shown to be somewhat more common in people who have mental illness in the family. Creativity is also linked to a slightly higher risk of schizophrenia and bipolar disorder. Certain psychological traits, such as the ability to make unusual pr bizarre associations are also shared by schizophrenics and healthy, highly creative people. And now the correlation between creativity and mental health has scientific backing. "The study shows that highly creative people who did well on the divergent tests had a lower density of D2 receptors in the thalamus than less creative people," says Dr Ullén.

Related:  Mental Heath and other bits and bobs

Why what we think we know about schizophrenia is wrong I remember the first time I forcibly medicated a person against his will. It was 13 years ago, not long after I’d qualified as a mental health nurse, and I had started my career working on a psychiatric ward providing assessment and treatment for adults in acute phases of serious mental illness. There was a patient (or service user or client or son or brother or friend, depending on who you ask) whom I’ll call Amit. Amit had been refusing any medication for nearly three weeks and with good reason. The medicine we were offering him contained a poison.

Rosenhan experiment Experiment to determine the validity of psychiatric diagnosis Rosenhan's study was done in eight parts. The first part involved the use of healthy associates or "pseudopatients" (three women and five men, including Rosenhan himself) who briefly feigned auditory hallucinations in an attempt to gain admission to 12 psychiatric hospitals in five states in the United States. All were admitted and diagnosed with psychiatric disorders. After admission, the pseudopatients acted normally and told staff that they felt fine and had no longer experienced any additional hallucinations.

Neuroscience, free will and determinism: 'I'm just a machine' What does this mean in terms of free will? "We don't have free will, in the spiritual sense. What you're seeing is the last output stage of a machine. There are lots of things that happen before this stage – plans, goals, learning – and those are the reasons we do more interesting things than just waggle fingers. But there's no ghost in the machine." The conclusions are shocking: if we are part of the universe, and obey its laws, it's hard to see where free will comes into it.

Jacob Barnett,12, with higher IQ than Einstein develops his own theory of relativity By Daily Mail Reporter Created: 16:03 GMT, 24 March 2011 A 12-year-old child prodigy has astounded university professors after grappling with some of the most advanced concepts in mathematics. Jacob Barnett has an IQ of 170 - higher than Albert Einstein - and is now so far advanced in his Indiana university studies that professors are lining him up for a PHD research role. The boy wonder, who taught himself calculus, algebra, geometry and trigonometry in a week, is now tutoring fellow college classmates after hours. Scroll down for video

The diagnosis question Mental health diagnoses can help people understand their experiences and access help. But some practitioners have raised queries, too. Photo: Prospect composite What is mental health? How the Brain Stops Time One of the strangest side-effects of intense fear is time dilation, the apparent slowing-down of time. It's a common trope in movies and TV shows, like the memorable scene from The Matrix in which time slows down so dramatically that bullets fired at the hero seem to move at a walking pace. In real life, our perceptions aren't keyed up quite that dramatically, but survivors of life-and-death situations often report that things seem to take longer to happen, objects fall more slowly, and they're capable of complex thoughts in what would normally be the blink of an eye.

Magnetic Mind Control How Does the Brain Work? PBS Airdate: September 14, 2011 NEIL DEGRASSE TYSON: Hi, I'm Neil deGrasse Tyson, your host for NOVA scienceNOW, where this season, we're asking six big questions. On this episode: How Does the Brain Work? To find out, I head to Las Vegas, where brain researchers are placing their bets on magic. Rosenhan experiment Rosenhan's study was done in two parts. The first part involved the use of healthy associates or "pseudopatients" (three women and five men, including Rosenhan himself) who briefly feigned auditory hallucinations in an attempt to gain admission to 12 different psychiatric hospitals in five different states in various locations in the United States. All were admitted and diagnosed with psychiatric disorders.

Estimated IQs of the Greatest Geniuses (created: 04/21/1998) (maintenance: 01/17/2005) This page is dedicated to some of the greatest minds of all time. A normal intelligence quotient (IQ) ranges from 85 to 115 (According to the Stanford-Binet scale). Only approximately 1% of the people in the world have an IQ of 135 or over. 55 Steps: A Battle Cry Against Forced 'Treatment’ For us All - Mad in the UK Editor’s note: This blog originally appeared on Rai Waddingham’s Behind the Label. Last week I emerged from hibernation (life is a bit tough right now for lots of reasons) to attend a ‘Psychology at the Movies’ screening of 55 Steps – an important and hard-hitting film based on a true story of Eleanor Reise (a lady repeatedly drugged against her will, played by Helena Bonham Carter) and Collette Hughes (her lawyer, played by Hilary Swank) that has been effectively buried. What I write here is based on a series of tweets I made, trying to explain why we need to work together to resurrect it. The opening scene was far more familiar than the 80s US asylum should be.