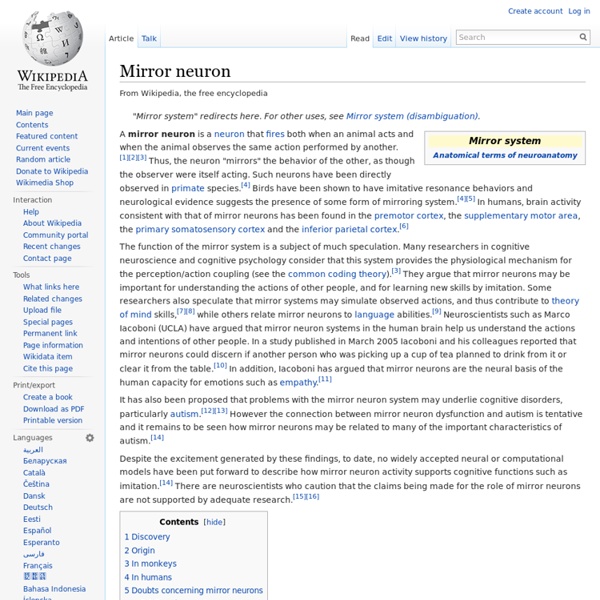 A mirror neuron is a neuron that fires both when an animal acts and when the animal observes the same action performed by another.[1][2][3] Thus, the neuron "mirrors" the behavior of the other, as though the observer were itself acting. Such neurons have been directly observed in primate species.[4] Birds have been shown to have imitative resonance behaviors and neurological evidence suggests the presence of some form of mirroring system.[4][5] In humans, brain activity consistent with that of mirror neurons has been found in the premotor cortex, the supplementary motor area, the primary somatosensory cortex and the inferior parietal cortex.[6] The function of the mirror system is a subject of much speculation. Discovery[edit] Further experiments confirmed that about 10% of neurons in the monkey inferior frontal and inferior parietal cortex have "mirror" properties and give similar responses to performed hand actions and observed actions. Origin[edit] In monkeys[edit] In humans[edit]

Theory of mind Definition[edit] Theory of mind is a theory insofar as the mind is not directly observable.[1] The presumption that others have a mind is termed a theory of mind because each human can only intuit the existence of his/her own mind through introspection, and no one has direct access to the mind of another. It is typically assumed that others have minds by analogy with one's own, and this assumption is based on the reciprocal nature of social interaction, as observed in joint attention,[4] the functional use of language,[5] and the understanding of others' emotions and actions.[6] Having a theory of mind allows one to attribute thoughts, desires, and intentions to others, to predict or explain their actions, and to posit their intentions. Theory of mind appears to be an innate potential ability in humans; one requiring social and other experience over many years for its full development. Different people may develop more, or less, effective theories of mind. Development[edit] Autism[edit]

Mirror Neurons Mirror Neurons PBS air date: January 25, 2005 ROBERT KRULWICH: Hello again. We humans are really good at reading faces and bodies. Ask yourself, "Why do people get so involved, so deeply, deeply involved, with such anguish, such pain, such nail biting tension over football?" COMMENTATOR: The Cleveland Browns are gambling on defense. ROBERT KRULWICH: Why are we such suckers for sports? Well, as it happens, scientists have an explanation for this strange ability to connect. DANIEL GLASER: It had never been found on a cellular level before. ROBERT KRULWICH: A set of brain cells, found on either side of the head, among all the billions of long branching cells in our brain, these so-called "mirror neurons," have surprising power. DANIEL GLASER: What we've found is the mechanism that underlies something which is absolutely fundamental to the way that we see other people in the world. (NEURON FIRING): Clack, clack, clack. ROBERT KRULWICH: ...whenever the monkey would grab for a peanut. V.S. V.S.

Cache Cab: Taxi Drivers' Brains Grow to Navigate London's Streets Manhattan's midtown streets are arranged in a user-friendly grid. In Paris 20 administrative districts, or arrondissements, form a clockwise spiral around the Seine. But London? A map of its streets looks more like a tangle of yarn that a preschooler glued to construction paper than a metropolis designed with architectural foresight. These navigational demands stimulate brain development, concludes a study five years in the making. Neuroscientist Eleanor Maguire of University College London (U.C.L.) first got the idea to study London cab drivers from research on memory champions of the animal world. Maguire wondered whether London taxi drivers also had larger-than-average hippocampi. In her earliest studies, Maguire discovered that London taxi drivers had more gray matter in their posterior hippocampi than people who were similar in age, education and intelligence, but who did not drive taxis. There are several ways to explain the ballooning hippocampus.

Philosophy of mind A phrenological mapping[1] of the brain – phrenology was among the first attempts to correlate mental functions with specific parts of the brain Philosophy of mind is a branch of philosophy that studies the nature of the mind, mental events, mental functions, mental properties, consciousness, and their relationship to the physical body, particularly the brain. The mind–body problem, i.e. the relationship of the mind to the body, is commonly seen as one key issue in philosophy of mind, although there are other issues concerning the nature of the mind that do not involve its relation to the physical body, such as how consciousness is possible and the nature of particular mental states.[2][3][4] Mind–body problem[edit] Our perceptual experiences depend on stimuli that arrive at our various sensory organs from the external world, and these stimuli cause changes in our mental states, ultimately causing us to feel a sensation, which may be pleasant or unpleasant. Arguments for dualism[edit]

Ads Implant False Memories | Wired Science  My episodic memory stinks. All my birthday parties are a blur of cake and presents. I’m notorious within my family for confusing the events of my own childhood with those of my siblings. I’m like the anti-Proust. And yet, I have this one cinematic memory from high-school. It’s an admittedly odd detail for an otherwise logo free scene, as if Coke had paid for product placement in my brain. So where did this sentimental scene starring soda come from? A new study, published in The Journal of Consumer Research, helps explain both the success of this marketing strategy and my flawed nostalgia for Coke. The experiment went like this: 100 undergraduates were introduced to a new popcorn product called “Orville Redenbacher’s Gourmet Fresh Microwave Popcorn.” One week later, all the subjects were quizzed about their memory of the product. The scientists refer to this as the “false experience effect,” since the ads are slyly weaving fictional experiences into our very real lives.

This new brain map shows almost 100 areas never described before You don’t have to be a neurosurgeon to know it’s hard to get to the right place without a good map. But neuroscientists have been blundering around with blurry brain maps, which sometimes aren’t very detailed, or omit important functions. That’s why a new map is so exciting — it shows nearly 100 areas that hadn’t been reported before. The map, described in a study published today in Nature, is a detailed look at the part of the brain that handles all your senses, as well as your motion — plus some other functions like problem solving and emotional regulation. It’s called the cerebral cortex, and it’s the brain’s outer layer of nerve tissue. "To understand the brain and to fix it, we really need to know the circuit diagram and all the parts, how they work and how they interact," says McCormick, who did not take part in the study. Matthew F. Putting together all that data helped identify these new areas. The interpretation of fMRI data has also been called into question in other studies.

Less Empathy Toward Outsiders: Brain Differences Reinforce Preferences For Those In Same Social Group An observer feels more empathy for someone in pain when that person is in the same social group, according to new research in the July 1 issue of The Journal of Neuroscience. The study shows that perceiving others in pain activates a part of the brain associated with empathy and emotion more if the observer and the observed are the same race. The findings may show that unconscious prejudices against outside groups exist at a basic level. The study confirms an in-group bias in empathic feelings, something that has long been known but never before confirmed by neuroimaging technology. "Our findings have significant implications for understanding real-life social behaviors and social interactions," said Shihui Han, PhD, at Peking University in China, one of the study authors. Other recent brain imaging studies show that feeling empathy for others in pain stimulates a brain area called the anterior cingulate cortex. But the finding raises as many questions as it answers, Farah said.

What my grandmother has taught me about lifelong learning Anna Ashton is my 64-year-old grandmother. She’s also a felt maker, musician, welder, milliner, builder, architect, seamstress, woodworker, artist, potter and a rather serious cyclist. Stubborn to a fault, I grew up watching her repeatedly find a challenge, put her mind to it and overcome it in new imaginative ways. She’s never stopped hunting for answers to problems, and I doubt she ever will. Anna moved from Edinburgh to Melbourne with her family at 10 years old, and one of her first triumphs was mastering an Aussie accent (until she starts hanging around with other Scots and the lilt returns). She and my grandfather Philip have had their fair share of grand adventures, cycling around the UK and kayaking to Turkey (all after hitting 50), as well as raising three children and designing and building their own beautiful three-storey house. In Anna’s eyes, learning has never had anything to do with expensive pieces of paper and qualifications. Anna and Philip, hams at large.