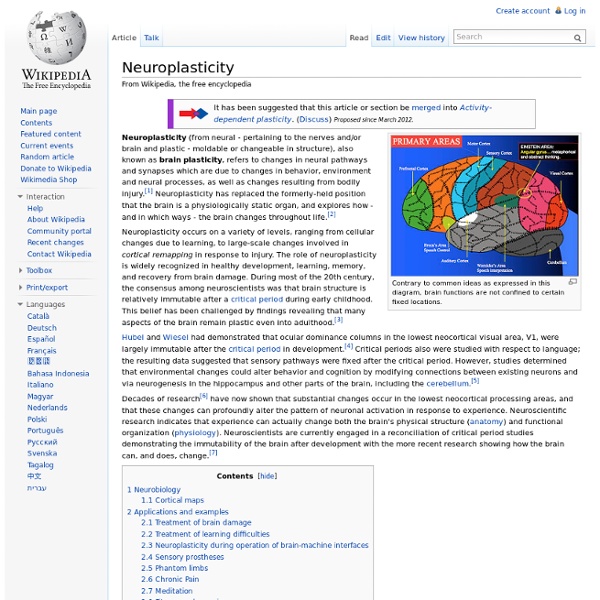 Contrary to conventional thought as expressed in this diagram, brain functions are not confined to certain fixed locations. Neuroplasticity, also known as brain plasticity, is an umbrella term that encompasses both synaptic plasticity and non-synaptic plasticity—it refers to changes in neural pathways and synapses which are due to changes in behavior, environment and neural processes, as well as changes resulting from bodily injury.[1] Neuroplasticity has replaced the formerly-held position that the brain is a physiologically static organ, and explores how - and in which ways - the brain changes throughout life.[2] Neuroplasticity occurs on a variety of levels, ranging from cellular changes due to learning, to large-scale changes involved in cortical remapping in response to injury. The role of neuroplasticity is widely recognized in healthy development, learning, memory, and recovery from brain damage. Neurobiology[edit] Cortical maps[edit] Applications and example[edit] Vision[edit] Related:  Neuroscience

Anthropology Anthropology /ænθrɵˈpɒlədʒi/ is the study of humankind, past and present,[1][2] that draws and builds upon knowledge from social and biological sciences, as well as the humanities and the natural sciences.[3][4] Since the work of Franz Boas and Bronisław Malinowski in the late 19th and early 20th centuries, anthropology in Great Britain and the US has been distinguished from ethnology[5] and from other social sciences by its emphasis on cross-cultural comparisons, long-term in-depth examination of context, and the importance it places on participant-observation or experiential immersion in the area of research. In those European countries that did not have overseas colonies, where ethnology (a term coined and defined by Adam F. Origin of the term[edit] The term anthropology originates from the Greek anthrōpos (ἄνθρωπος), "human being" (understood to mean humankind or humanity), and -λογία -logia, "study." Fields[edit] According to Clifford Geertz, Sociocultural[edit] Biological[edit]

- LifeEdited Force of habit: Stress hormones switch off areas of the brain for goal-directed behaviour Cognition psychologists at the Ruhr-Universität together with colleagues from the University Hospital Bergmannsheil (Prof. Dr. Martin Tegenthoff) have discovered why stressed persons are more likely to lapse back into habits than to behave goal-directed. The team of PD Dr. Two stress hormones in use In order to test the different stress hormones, the cognition psychologists used three substances – a placebo, the stress hormone hydrocortisone and yohimbine, which ensures that the stress hormone noradrenaline stays active longer. Goal-directed behaviour and habits investigated in the experiment In the experiment, all participants – both male and female – learned that they would receive cocoa or orange juice as a reward if they chose certain symbols on the computer. Combined effect of yohimbine and hydrocortisone As expected, volunteers who took yohimbine and hydrocortisone did not behave goal-directed but according to habit.

20 Amazing Facts About Your Brain The human brain is amazing and the more I read about it the more fascinated I become with not only it’s limitations, but also it’s immense power. Since I originally wrote the post 30 Amazing Facts About Your Brain I have been on the look out for more amazing tidbits. Here are another 20 for you to wrap your head round, but don’t make the mistake of thinking they don’t apply to you, because they do. 1. However, if you were to pull yours out and stretch out all the folds it would be over 3 feet square. Meet My Wife, Mrs Brownson-Brownson 2. Your brain just loves continuity and it loves familiarity, so even though you may consciously think your partners name had zero to do with you falling in love and it was really their perfectly formed personality, you’d be wrong. 3. Mmmm, Chocolate Cake 4. That’s why the old fashioned sweet trolleys really do generate more sales and top restaurants know this. 5. 6. 7. And The Winner is…….Roland The Rat 8. 9. Read This Blog More 10. 11. 12. 13. 14. 15. 16. 17.

Computer science Computer science deals with the theoretical foundations of information and computation, together with practical techniques for the implementation and application of these foundations History[edit] The earliest foundations of what would become computer science predate the invention of the modern digital computer. Blaise Pascal designed and constructed the first working mechanical calculator, Pascal's calculator, in 1642.[3] In 1673 Gottfried Leibniz demonstrated a digital mechanical calculator, called the 'Stepped Reckoner'.[4] He may be considered the first computer scientist and information theorist, for, among other reasons, documenting the binary number system. Although many initially believed it was impossible that computers themselves could actually be a scientific field of study, in the late fifties it gradually became accepted among the greater academic population.[15][16] It is the now well-known IBM brand that formed part of the computer science revolution during this time. Misc

Why Choice Makes People Miserable: 30 Amazing Facts About Your Brain Get The New Ebook ’70 Amazing Facts About Your Brain’ now if you sign up for my newsletter you will get a PDF version of the book along with 3 other books on goal setting, motivational quotes and dealing with stress. If you’d like a copy of the Kindle version, that is only available through Amazon here and it’s priced at a very affordable $2.99 Useful Self Development Brain Stuff 1. You have a finite amount of will power each day because to exercise will power you need energy in the form of oxygen and glucose That’s why it’s harder to say ‘no’ when you are tired or not feeling yourself. 2. 3. So make sure you don’t think, “Why do I suck?” 4. That’s why even left-brained people can have times of the day when they are more creative and right-brained people can sometimes get their taxes in order. Note: If you want to know how you can tell which side is dominant at any one time, check out Creativity – Guaranteed and you can then plan your time accordingly. 5. 6. 7. 8. 9. 10. 11. Brain Trivia 12.

Cognitive science Cognitive science is the interdisciplinary scientific study of the mind and its processes.[1] It examines what cognition is, what it does and how it works. It includes research on intelligence and behavior, especially focusing on how information is represented, processed, and transformed (in faculties such as perception, language, memory, reasoning, and emotion) within nervous systems (human or other animal) and machines (e.g. computers). Cognitive science consists of multiple research disciplines, including psychology, artificial intelligence, philosophy, neuroscience, linguistics, and anthropology.[2] It spans many levels of analysis, from low-level learning and decision mechanisms to high-level logic and planning; from neural circuitry to modular brain organization. The fundamental concept of cognitive science is "that thinking can best be understood in terms of representational structures in the mind and computational procedures that operate on those structures Principles[edit] "...

Opportunity cost History[edit] The term was first used in 1914 by Austrian economist Friedrich von Wieser in his book Theorie der gesellschaftlichen Wirtschaft [4] (Theory of Social Economy). The idea had been anticipated by previous writers including Benjamin Franklin and Frédéric Bastiat. Franklin coined the phrase "Time is Money", and spelt out the associated opportunity cost reasoning in his “Advice to a Young Tradesman” (1746): “Remember that Time is Money. He that can earn Ten Shillings a Day by his Labour, and goes abroad, or sits idle one half of that Day, tho’ he spends but Sixpence during his Diversion or Idleness, ought not to reckon That the only Expence; he has really spent or rather thrown away Five Shillings besides.” Bastiat's 1848 essay "What Is Seen and What Is Not Seen" used opportunity cost reasoning in his critique of the broken window fallacy, and of what he saw as spurious arguments for public expenditure. Opportunity costs in production[edit] Explicit costs[edit] Implicit costs[edit]