Dyslexic Advantage - Dyslexia is an advantage. 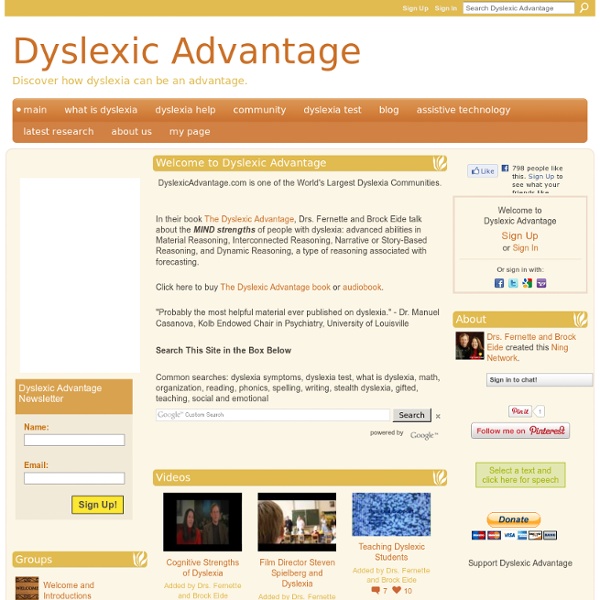 Future Actions Decoded And Predicted In The Human Brain » The Behavioral Medicine Report Bringing the real world into the brain scanner, researchers at The University of Western Ontario from The Centre for Brain and Mind can now determine the action a person was planning, mere moments before that action is actually executed. Included in this report is several videos – one that shows FMRI data and another that contains interviews with the two lead researchers. The findings were published this week in the prestigious Journal of Neuroscience, in the paper, “Decoding Action Intentions from Preparatory Brain Activity in Human Parieto-Frontal Networks.” “This is a considerable step forward in our understanding of how the human brain plans actions,” says Jason Gallivan, a Western Neuroscience PhD student, who was the first author on the paper.

The International Dyslexia Association Promoting literacy through research, education and advocacy Information on Interventions and Instructions IDA Position Statement: Dyslexia Treatment Programs The IDA Board of Directors and IDA Branches are frequently asked to endorse or review treatment programs for the prevention and remediation of dyslexia and other reading-related problems. Conference on Dyslexia and Talent What You May Not Know About Dyslexia…. Like this: Like Loading... Related Scientific American on the Advantages of Dyslexia Great to see Scientific American covering the advantages of dyslexia...Excerpt: "Dyslexia is often called a “learning disability.”

The Neuroscience Of Music Why does music make us feel? On the one hand, music is a purely abstract art form, devoid of language or explicit ideas. The stories it tells are all subtlety and subtext. And yet, even though music says little, it still manages to touch us deep, to tickle some universal nerves. When listening to our favorite songs, our body betrays all the symptoms of emotional arousal. Reading Programs Focus on skills that underlie reading "There are no universally effective programs, but here are knowable principles that need to be incorporated in all programs about how we teach written language." Maryanne Wolf, researcher and parent, in Proust and the Squid, 2007, p. 209 The following is a list of some programs that have been developed for struggling readers and writers.

Managing with the Brain in Mind Naomi Eisenberger, a leading social neuroscience researcher at the University of California at Los Angeles (UCLA), wanted to understand what goes on in the brain when people feel rejected by others. She designed an experiment in which volunteers played a computer game called Cyberball while having their brains scanned by a functional magnetic resonance imaging (fMRI) machine. Cyberball hearkens back to the nastiness of the school playground.

Napa Valley Unified School District: ALPS Home Page Summit Center Launches Doctoral Training Program Summit Center is proud to announce the new Summit Center Training Program, starting this fall in Northern California, and directed by Dr. Stephen Chou, Psy.D. The training program will offer advanced psychology doctoral students the opportunity to develop therapeutic and assessment skills while making lower-cost counseling and testing available to the community. The goal of the training program is address the need for more psychologists who have experience and expertise working with children, youth, adults, and their families from multicultural backgrounds with a special interest in gifted and talented populations. Our senior trainees will provide the full range of Summit Center services, including:

TED Talks: Goldie Hawn, Daniel Siegel On Mindfulness For Childre Actress Goldie Hawn spoke at the TEDMED conference about her "very big, very broad dream" of bringing happiness to children. "I thought, let's do something drastic," she said. "Lets hope and pray for all kids to experience happiness." She turned this big dream into an innovative program called "MindUP" -- a curriculum that goes beyond academics, teaching children how to be in touch with their emotions and manage stress through focused breathing, focused attention, relaxation and awareness. Saddened by the problems affecting today's youth -- depression, suicide, drop out rates and a growing lack of empathy -- she assembled a team of neuroscientists, doctors, researchers, educators and psychologists to create the program. The children are also taught neuroscience; the idea being that if they know how their minds work, they will be better able to understand and control their behavior.

AtGoogleTalks AtGoogleTalks (or @Google Talks or Talks@Google) is a series of presentations by invited speakers sponsored by Google given at various Google offices throughout the world. The series has feature categories such as Authors@Google, Candidates@Google, Women@Google, Musicians@Google and others. For technical topics, there is Google Tech Talks (also known as EngEDU[1]) which is dedicated to exploring areas of technology and science. Guest speakers range from present and past world leaders to little-known poets and artists. Neuroscience Neuroscience is the scientific study of the nervous system.[1] Traditionally, neuroscience has been seen as a branch of biology. However, it is currently an interdisciplinary science that collaborates with other fields such as chemistry, computer science, engineering, linguistics, mathematics, medicine and allied disciplines, philosophy, physics, and psychology. It also exerts influence on other fields, such as neuroeducation[2] and neurolaw. The term neurobiology is usually used interchangeably with the term neuroscience, although the former refers specifically to the biology of the nervous system, whereas the latter refers to the entire science of the nervous system. Because of the increasing number of scientists who study the nervous system, several prominent neuroscience organizations have been formed to provide a forum to all neuroscientists and educators.

Rubin Museum of Art:Brainwave 2010 If you are only now catching up with Brainwave, or you want to revisit some of the best of the last seven years, this ten-episode DVD is available at the museum’s Shop or online at What happens in our brains when we attempt to overcome adversity, survive tests of endurance and stay focused under pressure? This is the subject of the seventh annual Brainwave, a series of on-stage conversations, films and experiences.