Sebastian Seung: I am my connectome 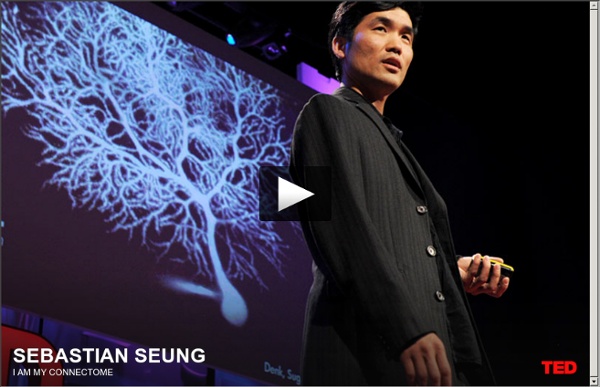 The Science of "Chunking," Working Memory, and How Pattern Recognition Fuels Creativity by Maria Popova “Generating interesting connections between disparate subjects is what makes art so fascinating to create and to view… We are forced to contemplate a new, higher pattern that binds lower ones together.” It seems to be the season for fascinating meditations on consciousness, exploring such questions as what happens while we sleep, how complex cognition evolved, and why the world exists. Joining them and prior explorations of what it means to be human is The Ravenous Brain: How the New Science of Consciousness Explains Our Insatiable Search for Meaning (public library) by Cambridge neuroscientist Daniel Bor in which, among other things, he sheds light on how our species’ penchant for pattern-recognition is essential to consciousness and our entire experience of life.

The Connectome — Harvard School of Engineering and Applied Sciences Lead investigators Hanspeter Pfister (SEAS ), Jeff Lichtman (FAS/Molecular & Cellular Biology, Center for Brain Science) and Clay Reid (HMS/Neurobiology, Center for Brain Science) Description The overall goal of the Connectome project is to map, store, analyze and visualize the actual neural circuitry of the peripheral and central nervous systems in experimental organisms, based on a very large number of images from high-resolution microscopy. The proposing team from the Center for Brain Sciences has already demonstrated its capacity for, and expertise in, high-throughput imaging. The critical challenges are computational, as the total number of voxels needed to establish the Connectome is ~1014.

First map of the human brain reveals a simple, grid-like structure between neurons In an astonishing new study, scientists at the National Institutes of Health (NIH), have imaged human and monkey brains and found… well, the image above says it all. It turns out that the pathways in your brain — the connections between neurons — are almost perfectly grid-like. It’s rather weird: If you’ve ever seen a computer ribbon cable — a flat, 2D ribbon of wires stuck together, such as an IDE hard drive cable — the brain is basically just a huge collection of these ribbons, traveling parallel or perpendicular to each other.

The Brain Needs Downs to Have Ups Four neurochemicals cause happiness : endorphins, dopamine , oxytocin and serotonin. Each evolved to do a different job. When you know what the job is, you know why your happy chemicals can't be on all the time. 1. Endorphins evolved to mask pain. Connectomics Connectomics is the production and study of connectomes: comprehensive maps of connections within an organism's nervous system, typically its brain or eye. Because these structures are extremely complex, methods within this field use a high-throughput application of neural imaging and histological techniques in order to increase the speed, efficiency, and resolution of maps of the multitude of neural connections in a nervous system. While the principal focus of such a project is the brain, any neural connections could theoretically be mapped by connectomics, including, for example, neuromuscular junctions. Tools[edit] Model Systems[edit]

IBM scientists create most comprehensive map of the brain’s network "The Mandala of the Mind": The long-distance network of the Macaque monkey brain, spanning the cortex, thalamus, and basal ganglia, showing 6,602 long-distance connections between 383 brain regions. (PNAS) The Proceedings of the National Academy of Sciences (PNAS) published Tuesday a landmark paper entitled “Network architecture of the long-distance pathways in the macaque brain” (an open-access paper) by Dharmendra S. Modha (IBM Almaden) and Raghavendra Singh (IBM Research-India) with major implications for reverse-engineering the brain and developing a network of cognitive-computing chips.

Neurogenesis Neurogenesis (birth of neurons) is the process by which neurons are generated from neural stem cells and progenitor cells. Most active during pre-natal development, neurogenesis is responsible for populating the growing brain with neurons. Recently neurogenesis was shown to continue in several small parts of the brain of mammals: the hippocampus and the subventricular zone. Studies have indicated that the hormone testosterone in vertebrates, and the prohormone ecdysone in insects, have an influence on the rate of neurogenesis.[citation needed] Occurrence in adults[edit]

Simple mathematical pattern describes shape of neuron ‘jungle’ Neuron shape model: target points (red) distributed in a spherical volume and connected to optimize wiring in a tree (black) (credit: H. Cuntz et al./PNAS) University College London (UCL) neuroscientists have found that there is a simple pattern that describes the tree-like shape of all neurons. Neurons look remarkably like trees, and connect to other cells with many branches that effectively act like wires in an electrical circuit, carrying impulses that represent sensation, emotion, thought and action.

Sequencing the Connectome Converting connectivity into a sequencing problem can be broken down conceptually into three components. (A) Label each neuron with a unique sequence of nucleotides — a DNA “barcode.” (B) Associate barcodes from synaptically connected neurons with one another, so that each neuron can be thought of as a “bag of barcodes” — copies of its own “host” barcode and copies of “invader” barcodes from synaptic partners. (C) Join host and invader barcodes into barcode pairs. These pairs can be subjected to high-throughput sequencing. (Credit: Anthony M. How The Brain Rewires Itself It was a fairly modest experiment, as these things go, with volunteers trooping into the lab at Harvard Medical School to learn and practice a little five-finger piano exercise. Neuroscientist Alvaro Pascual-Leone instructed the members of one group to play as fluidly as they could, trying to keep to the metronome's 60 beats per minute. Every day for five days, the volunteers practiced for two hours. Then they took a test.

70,000+ Have Played ‘Eyewire’ Game That Trains Computers To Map the Brain Your connectome, the map of all 86 billion connected neurons in your brain, is hopelessly complex. In fact, one human connectome has a staggering 10,000 times that number of neural pathways. Every thought you have and every memory you hold exists in your connectome, and major efforts are under way to map it.

I almost disagreed with his hypothesis because my "connectome" must be constantly changing and it seemed he was discussing a static entity. But - my connectome is growing with each new/bigger/different synapse - so maybe I AM (merely?) my connectome. So, if you and are "connected" via this pearl, you too are part of my connectome - ha!, and part of me. And that's the spiritual truth behind the science, I suppose. Lovely, isn't it? by seannab Nov 22

Sebastian Seung introduces the concept of 'connectome' the connections between your neurons. This is a good introduction of neuroscience. by kaspervandenberg Nov 5