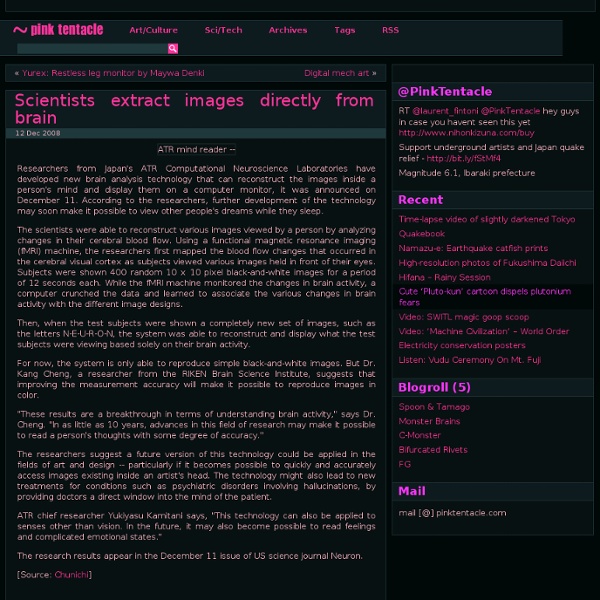 Researchers from Japan's ATR Computational Neuroscience Laboratories have developed new brain analysis technology that can reconstruct the images inside a person's mind and display them on a computer monitor, it was announced on December 11. According to the researchers, further development of the technology may soon make it possible to view other people's dreams while they sleep. The scientists were able to reconstruct various images viewed by a person by analyzing changes in their cerebral blood flow. Using a functional magnetic resonance imaging (fMRI) machine, the researchers first mapped the blood flow changes that occurred in the cerebral visual cortex as subjects viewed various images held in front of their eyes. Subjects were shown 400 random 10 x 10 pixel black-and-white images for a period of 12 seconds each. For now, the system is only able to reproduce simple black-and-white images. "These results are a breakthrough in terms of understanding brain activity," says Dr.

The 10 Memory Tricks Backed By Science Boosts in all types of memory come from these simple activities. 1. Draw it Drawing pictures of words helps build stronger and more reliable memories, new research finds. The quality of the drawings themselves does not matter, the study also found. Neuroscience, free will and determinism: 'I'm just a machine' What does this mean in terms of free will? "We don't have free will, in the spiritual sense. What you're seeing is the last output stage of a machine. There are lots of things that happen before this stage – plans, goals, learning – and those are the reasons we do more interesting things than just waggle fingers. But there's no ghost in the machine." The conclusions are shocking: if we are part of the universe, and obey its laws, it's hard to see where free will comes into it.

FUCK YEAH NERVOUS SYSTEM “Your worst enemy, he reflected, was your nervous system. At any moment the tension inside you was liable to translate itself into some visible symptom.” About that Heliocentric thing… This is waaaaay too cool not to share about your planet’s yellow Sun. And then there is this. A good thought project for Lent. As you watch the animation, as you watch the little dot planets whirl about the Sun, and the Sun on the galactic plane go zooming along in its own snaky path, consider how many times you see the planets circle the Sun and then consider the span of your life…

With an Artificial Memory Chip, Rats Can Remember and Forget At the Touch of a Button A new brain implant tested on rats restored lost memories at the flick of a switch, heralding a possible treatment method for patients with Alzheimer's disease, stroke or amnesia. Such a "neural prosthesis" could someday be used to facilitate the memory-forming process and help patients remember. The device can mimic the brain's own neural signals, thereby serving as a surrogate for a piece of the brain associated with forming memories. If there is sufficient neural activity to trace, the device can restore memories after they have been lost. If it's used with a normal, functioning hippocampus, the device can even enhance memory.

Lies, Damned Lies, and Medical Science - David H. Freedman In 2001, rumors were circulating in Greek hospitals that surgery residents, eager to rack up scalpel time, were falsely diagnosing hapless Albanian immigrants with appendicitis. At the University of Ioannina medical school’s teaching hospital, a newly minted doctor named Athina Tatsioni was discussing the rumors with colleagues when a professor who had overheard asked her if she’d like to try to prove whether they were true—he seemed to be almost daring her. She accepted the challenge and, with the professor’s and other colleagues’ help, eventually produced a formal study showing that, for whatever reason, the appendices removed from patients with Albanian names in six Greek hospitals were more than three times as likely to be perfectly healthy as those removed from patients with Greek names. “It was hard to find a journal willing to publish it, but we did,” recalls Tatsioni. “I also discovered that I really liked research.”

It’s time for science to abandon the term ‘statistically significant’ The aim of science is to establish facts, as accurately as possible. It is therefore crucially important to determine whether an observed phenomenon is real, or whether it’s the result of pure chance. If you declare that you’ve discovered something when in fact it’s just random, that’s called a false discovery or a false positive. And false positives are alarmingly common in some areas of medical science. Mars also undergoing climate change as ice age retreats, study shows Earth isn’t the only planet grappling with climate change, although this other orb doesn’t have much in the way of fossil fuel emissions or a 97 percent of scientific “consensus” on global warming. Newly published evidence suggests Mars is experiencing global warming as it emerges from an ice age. The red planet, which moved closer to the Earth on Monday than at any other time since 2005, has retreated from a glacial period that would have covered large areas in white before the thaw about 370,000 years ago, according to a study published Friday in the journal Science. The research was conducted using an instrument on board the NASA Mars Reconnaissance Orbiter that allowed an unprecedented examination of “the most recent Martian ice age recorded in the planet’s north polar ice cap,” according to a NASA press release. Research was led by planetary scientist Isaac B. Smith at the Southwest Research Institute in Boulder, Colorado.

Population Genetics notes I’m releasing a draft of my population genetics notes from the graduate level course I teach in the population biology graduate core course here at UC Davis. I developed these notes in the last iteration of the course I taught, and so they are still full of typos etc. I hope they will be of use to others. pdf of popgen notes (click on the “raw” button to download the pdf). A html version of the notes generated by pandoc and github-pages. Some Works on Evolution Worth Reading Evolutionary biologists have, since Darwin, held that random mutations are filtered by natural selection to produce the biological life that we now see. Since Darwin they have spoken in generalities, assuming that the mutations at the sub-cell level are actually happening across almost innumerable generations. In modern times, the sciences have not only begun to be able to measure such changes, but more profoundly, the mathematicians have begun to apply standard modeling to biology.

Artificial Intelligence's "Holy Grail" Victory In 1943, at the height of World War II, the U.S. military hired an audacious psychologist named B.F. Skinner to develop pigeon-guided missiles. These were the early days of munitions guidance technology, and the Allies were apparently quite desperate to find more reliable ways to get missiles to hit their targets. It went like this: Skinner trained pigeons to peck at an image of the military target projected onto a screen. Whenever their beaks hit the moving target dead center, he rewarded the birds with food pellets. The Psychology of Sex Differences – 5 Revealing Insights From Our Primate Cousins By Christian Jarrett There are behavioural differences, on average, between the sexes – few would dispute that. Where the debate rages is over how much these differences are the result of social pressures versus being rooted in our biology (the answer often is that there is a complex interaction between the two). For example, when differences are observed between girls and boys, such as in preferences for play, one possibility is that this is partly or wholly because of the contrasting ways that girls and boys are influenced by their peers, parents and other adults (because of the ideas they have about how the sexes ought to behave). Studying non-human primates allows us to identity sex differences in behavior that can’t be due to human culture and gender beliefs. “Many sex differences in behavioral development exist in nonhuman primates,” she writes, “despite a comparative lack of sex-biased treatment by mothers and other social partners”.

Fraudelent 19th Century Embryology Still Taught, While Modern Ultrasounds Hidden When Ernst Haeckel's embryology drawings, which are today acknowledged now to be completely wrong, supported the theory of evolution it was in every textbook and promulgated far and wide. Even now, when it has been known to be a fraud for decades, it still appears in many modern textbooks. Michael Richardson, Professor of Evolutionary Developmental Zoology, called them "one of the most famous fakes in biology" but also called them "important as...teaching aids, and evidence for evolution."

Essay 3: Creatio ex Nihilo and Cosmology;Science Intersects Catholic Teaching - Truth Cannot Contradict Truth Section 1: Creatio ex Nihilo—Theology “In the beginning God created the heavens and the earth. The earth was formless and void, and darkness was over the surface of the deep, and the Spirit of God was moving over the surface of the waters.” —Genesis:1:1-2 (KJV) What we as Catholics believe about Creation is spelled out by the Catholic Catechism (CC:279-324): Why belief in Creation is fundamental to faith;God creates “out of nothing” (ex nihilo);God creates an ordered and good world;God transcends Creation and is present to it;God upholds and sustains Creation.

@mirlen101 if you still wanna see some of the stuff i have done at college, it would be easier if i had your email...if u can find out how to give me it somehow. email darthballs77@hotmail.co.uk then i will have your email address. to look at any videos i have done, goto my pearltree videos and they are all there...including what my daughter did with the webcam by gboyle2001 Feb 26

wouldn't believe this . The story is listed as 2008 . If this was true it would be so huge everyone would be talking about it in the media . So far as far as I know the only way to bring up an image that a person is looking at is to fingerprint ( so to speak , recognition algorithms) an image the person is looking at . Then when the person sees that image the computer matches it to a database of images that have been previously fingerprinted ( algorithmed ) . So the system only knows what a person is looking at based on pre-formed recognition algorithms ( visual fingerprinting ;-) Guessing what your looking at based on what the system knows you looked at previously . The system basically picks up a brain wave that says the person recognizes a particular image . Who knows someday someone might achieve what they are talking about in the article but I'm sure it way in the future not now or in 2008 ;-) by mirlen101 Feb 16

I can't believe this! does anyone know where I can find the original study? by luffy007 Feb 15