13 Things to Avoid When Changing Habits 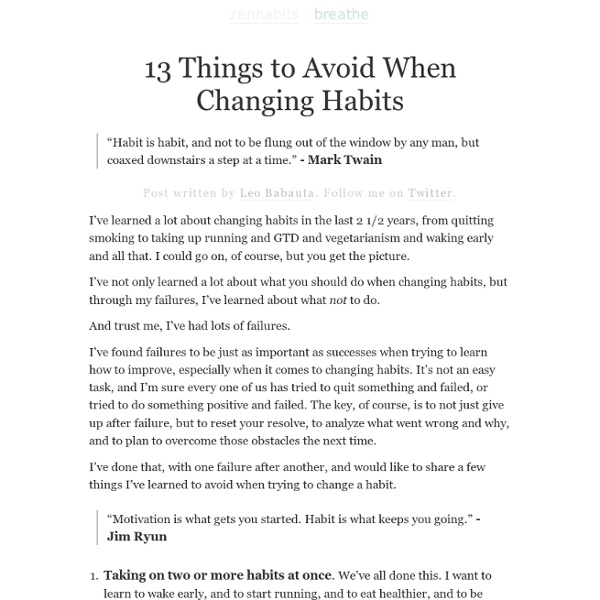 “Habit is habit, and not to be flung out of the window by any man, but coaxed downstairs a step at a time.” - Mark Twain Post written by Leo Babauta. Follow me on Twitter. I’ve learned a lot about changing habits in the last 2 1/2 years, from quitting smoking to taking up running and GTD and vegetarianism and waking early and all that. I could go on, of course, but you get the picture. I’ve not only learned a lot about what you should do when changing habits, but through my failures, I’ve learned about what not to do. And trust me, I’ve had lots of failures. I’ve found failures to be just as important as successes when trying to learn how to improve, especially when it comes to changing habits. I’ve done that, with one failure after another, and would like to share a few things I’ve learned to avoid when trying to change a habit. “Motivation is what gets you started. Taking on two or more habits at once. “We are what we repeatedly do.

7 Secrets of the Super Organized A few years ago, my life was a mess. So was my house, my desk, my mind. Then I learned, one by one, a few habits that got me completely organized. Am I perfect? Minimal ZTD: The Simplest System Possible Post written by Leo Babauta. Follow me on Twitter. Recently I posted my new twist on the excellent GTD system, Zen To Done (ZTD): The Ultimate Simple Productivity System. However, reader Mark Siegal said that the system seems to complex. So I now present the minimalist version of ZTD — a way to be productive without all the fuss. The Four Habits 1 collect. Increase your productivity at work by letting go of negative men My alma mater is currently ranked number one in all of the college men’s basketball rankings. They’ve been in the top spot for 11 of the 14 weeks of the polls, and were number one in the preseason. There are five games left in the regular season, and all of the teams Kansas has left to play would love to see the Jayhawks lose. Colorado, Oklahoma, Oklahoma State, Kansas State, and Missouri fans aren’t the only ones who want to see Kansas mess up their record in the last five games. Fans of the other ranked teams would be happy to see Kansas take a tumble, and, after watching some of the games this year, I’m pretty certain there are a few referees that would be glad to see Kansas lose, too. In competitive sports like basketball, a game has to end with a winner and a loser.

The Neuroscience of Decision Making In an attempt to put matter over mind, researchers are beginning to decipher what exactly is happening in our brains when we are making decisions. Our thoughts, though abstract and vaporous in form, are determined by the actions of specific neuronal circuits in our brains. The interdisciplinary field known as “decision neuroscience” is uncovering those circuits, thereby mapping thinking on a cellular level. Although still a young field, research in this area has exploded in the last decade, with findings suggesting it is possible to parse out the complexity of thinking into its individual components and decipher how they are integrated when we ponder. 7 Keys to a Flawless Conversation The ability to hold a natural conversation is key to success in the professional world. Knowing when to initiate a discussion, keeping it interesting by asking effective questions, sharing your own stories and ending dialogue with kindness is an art. So, are you a smooth talker? Learn how to create connections in conversations by following these seven steps: 1.

10 Ways History’s Finest Kept Their Focus at Work Post written by Albert van Zyl from the blog HeadSpace. The lives of great people give us interesting clues about how to organise our days. All of them attached great value to their daily routines. This is because they saw it as being part of ‘becoming who they are’, as Nietzsche puts it. For the same reason they were also highly individual in their routines.

50+ Personal Productivity Blogs You’ve Never Heard of Before (and about a dozen you probably have) - Stepcase Lifehack The personal productivity niche on the Web has grown by leaps and bounds since Lifehack launched only a few years ago. While a few sites dominate the rankings, there are lots and lots of lesser-known sites that are as good or even better than the “A-list” productivity blogs. Most of them are solo operations — the GTD newbie documenting his or her quest for greater control over their life, the coach or consultant sharing his or her knowledge with the world, the writer adding to his or her published work with notes, errata, and new findings. Their voice is personal, intimate even — and deserves to be heard. So here I present a collection of productivity blogs that are less well-known, by writers I think you should get to know better. Of course, the big names are here too — after all, I owe some of them a tremendous debt for helping me get a grip on my own life.

Berkeley on Biphasic Sleep If you see a student dozing in the library or a co-worker catching 40 winks in her cubicle, don’t roll your eyes. New research from the University of California, Berkeley, shows that an hour’s nap can dramatically boost and restore your brain power. Indeed, the findings suggest that a biphasic sleep schedule not only refreshes the mind, but can make you smarter. Students who napped (green column) did markedly better in memorizing tests than their no-nap counterparts. The 4-Step Plan to Never Procrastinate Again Ever known you should do something right now, but you can't muster the will to get started? You know the longer you put off a task, the more likely it'll be done hastily (sloppy work, #sorryboutit) or not get done at all (oops, another skipped workout!). Many of us have been there.

Related:
Related:  Reflection for Course Faciltator Session 2   -  Building a TEL Community: Reflection, Consolidation, GROWTH   -  Reflection   -  Reading Strategies - Learning Skills from MindTools.com   -  Action Method Online | Login   -  Category:Creativity Techniques - Mycoted   -  Marshall Goldsmith Library   -  The 21 Day Challenge Everyone Should Take   -  6 Small Things You Can Do When You Lack Discipline : zenhabits   -  Super Brain - Part 1 of 8 - YouTube   -  Drawing on the Right Side of the Brain   -  Idea Framing, Metaphors, and Your Brain - George Lakoff - YouTube   -  The Brain: A Body Fit for a Freaky-Big Brain | DiscoverMagazine.com   -  Neuroscience of Music – How Music Enhances Learning Through Neuroplasticity | Neuroscience News Research Articles | Neuroscience Social Network   -  Neurogenesis - Wikipedia, the free encyclopedia   -  Transparent Corporation   -  Less Empathy Toward Outsiders: Brain Differences Reinforce Preferences For Those In Same Social Group -- ScienceDaily   -  Reconstructing visual experiences from brain activity evoked by natural movies - GallantLabUCB   -  Brain Facts and Figures   -  The Neuroscience of Emotions - YouTube   -  7 Deadly Sins of Creativity   -  TO UNDERSTAND IS TO PERCEIVE PATTERNS on Vimeo   -  Brain Structures and Their Functions   -  30 Amazing Facts About Your Brain - A Daring Adventure   -  The Power of Habit: Why We Do What We Do in Life and Business: Charles Duhigg: 3520700000553: Amazon.com: Books   -  7 Ways to Enhance Focus, Creativity, Productivity and Performance | Psychology Today   -  THE BRAIN FROM TOP TO BOTTOM   -  Study Smarter, Not Harder | Psychology Today   -  What is the Self? - YouTube   -  How To Create A Habit In 15 Days | Dragos Roua   -  MIT discovers the location of memories: Individual neurons   -  Researchers show that memories reside in specific brain cells | MIT News Office