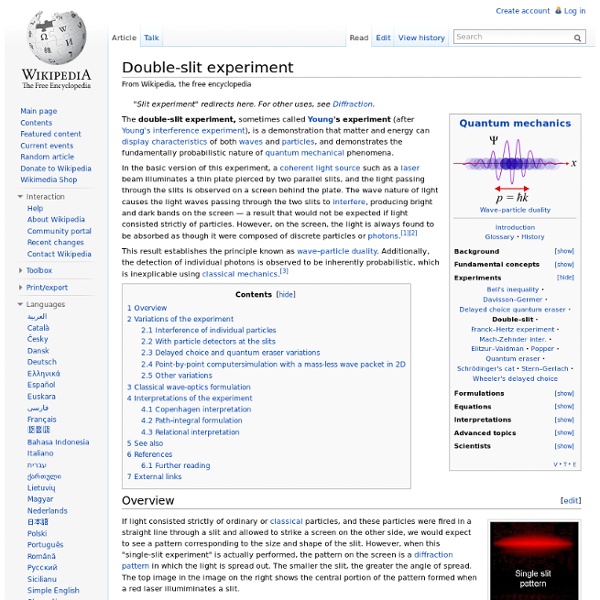 The double-slit experiment is a demonstration that light and matter can display characteristics of both classically defined waves and particles; moreover, it displays the fundamentally probabilistic nature of quantum mechanical phenomena. The experiment belongs to a general class of "double path" experiments, in which a wave is split into two separate waves that later combine back into a single wave. Changes in the path lengths of both waves result in a phase shift, creating an interference pattern. Another version is the Mach–Zehnder interferometer, which splits the beam with a mirror. This experiment is sometimes referred to as Young's experiment and while there is no doubt that Young's demonstration of optical interference, using sunlight, pinholes and cards, played a vital part in the acceptance of the wave theory of light, there is some question as to whether he ever actually performed a double-slit interference experiment.[1] Overview[edit] Variations of the experiment[edit]

Black body As the temperature of a black body decreases, its intensity also decreases and its peak moves to longer wavelengths. Shown for comparison is the classical Rayleigh–Jeans law and its ultraviolet catastrophe. A black body is an idealized physical body that absorbs all incident electromagnetic radiation, regardless of frequency or angle of incidence. A black body in thermal equilibrium (that is, at a constant temperature) emits electromagnetic radiation called black-body radiation. The radiation is emitted according to Planck's law, meaning that it has a spectrum that is determined by the temperature alone (see figure at right), not by the body's shape or composition. A black body in thermal equilibrium has two notable properties:[1] It is an ideal emitter: it emits as much or more energy at every frequency than any other body at the same temperature.It is a diffuse emitter: the energy is radiated isotropically, independent of direction. Definition[edit] Idealizations[edit] Realizations[edit]

Davisson–Germer experiment History and Overview[edit] According to Maxwell's equations in the late 19th century, light was thought to consist of waves of electromagnetic fields and matter was thought to consist of localized particles. However, this was challenged in Albert Einstein’s 1905 paper on the photoelectric effect, which described light as discrete and localized quanta of energy (now called photons), which won him the Nobel Prize in Physics in 1921. In 1927 Louis de Broglie presented his thesis concerning the wave-particle duality theory, which proposed the idea that all matter displays the wave-particle duality of photons.[2] According to de Broglie, for all matter and for radiation alike, the energy E of the particle was related to the frequency of its associated wave ν by the Planck relation: And that the momentum of the particle p was related to its wavelength by what is now known as the de Broglie relation: where h is Planck's constant. Early Experiments[edit] Experimental setup A breakthrough[edit] R.

holography « LifeOS: exploring the system that executes DNA It all starts with the properties of laser light. Of course you know how a laser is created. Ordinary light is beamed through a crystal. The properties of laser light are still being explored, but those already discovered have revolutionized modern technology. What makes a hologram work is that the two beams of laser light that illuminate the object are not only the same type, but in perfect synchronization. The resulting pattern is meaningless when seen in ordinary light, but when illuminated by the original laser, it produces a 3D image of the original object. The interference patterns captured on film are not focused by a lens and therefore the information thus recorded is evenly distributed over the recording surface. Quoted from, “The Holographic Universe”, by Michael Talbot The “whole in every part” nature of a hologram provides us with an entirely new way of understanding organization and order. A Coherent Electromagnetic Field Holographic Memory More from Michael Talbot:

Casimir effect Casimir forces on parallel plates A water wave analogue of the Casimir effect. Two parallel plates are submerged into colored water contained in a sonicator. When the sonicator is turned on, waves are excited imitating vacuum fluctuations; as a result, the plates attract to each other. The typical example is of two uncharged metallic plates in a vacuum, placed a few nanometers apart. Dutch physicists Hendrik B. In modern theoretical physics, the Casimir effect plays an important role in the chiral bag model of the nucleon; and in applied physics, it is significant in some aspects of emerging microtechnologies and nanotechnologies.[8] Any medium supporting oscillations has an analogue of the Casimir effect. Overview[edit] Possible causes[edit] Vacuum energy[edit] Main article: Vacuum energy Summing over all possible oscillators at all points in space gives an infinite quantity. Relativistic van der Waals force[edit] Effects[edit] . ). depends on the shape, and so one should write , at point p.

Beats. From Physclips Interference and consonance The ratios 3:2 and 5:4 are called (by many Western people, at least), musical consonances (in just intonation). In this example, one tone remains constant at 400 Hz. Here are some more consonances in just intonation. and here a scale constructed using the notes used the consonances given above, plus two consonances at 5:4 and 3:2 based on the fifth note in the scale. However, this has taken us some distance from beats and Tartini tones. Tuning a guitar with beats and harmonics Here I use the fourth 'harmonic' on the low E string and the third 'harmonic' on the A string. Look at the soundtrack. In the clip above, we notice that, because of the finite ring time of the strings, there is a limit to the precision of the tuning. What beats have to do with Heisenberg's Uncertainty Principle

Franck–Hertz experiment Photograph of a vacuum tube with a drop of mercury that's used for the Franck–Hertz experiment in instructional laboratories. A - anode disk. G - metal mesh grid. C - cathode assembly; the cathode itself is hot, and glows orange. The Franck–Hertz experiment was the first electrical measurement to clearly show the quantum nature of atoms, and thus "transformed our understanding of the world".[1] It was presented on April 24, 1914 to the German Physical Society in a paper by James Franck and Gustav Hertz.[2][3] Franck and Hertz had designed a vacuum tube for studying energetic electrons that flew through a thin vapor of mercury atoms. These experimental results proved to be consistent with the Bohr model for atoms that had been proposed the previous year by Niels Bohr. On December 10, 1926, Franck and Hertz were awarded the 1925 Nobel Prize in Physics "for their discovery of the laws governing the impact of an electron upon an atom The experiment[edit] Effect in other gases[edit]

Bell test experiments Bell test experiments or Bell's inequality experiments are designed to demonstrate the real world existence of certain theoretical consequences of the phenomenon of entanglement in quantum mechanics which could not possibly occur according to a classical picture of the world, characterised by the notion of local realism. Under local realism, correlations between outcomes of different measurements performed on separated physical systems have to satisfy certain constraints, called Bell inequalities. John Bell derived the first inequality of this kind in his paper "On the Einstein-Podolsky-Rosen Paradox".[1] Bell's Theorem states that the predictions of quantum mechanics cannot be reproduced by any local hidden variable theory. The term "Bell inequality" can mean any one of a number of inequalities satisfied by local hidden variables theories; in practice, in present day experiments, most often the CHSH; earlier the CH74 inequality. Conduct of optical Bell test experiments[edit] Pan et al.'

Quantum Zeno effect The name comes from Zeno's arrow paradox which states that, since an arrow in flight is not seen to move during any single instant, it cannot possibly be moving at all.[note 1] The first rigorous and general derivation of this effect was presented in 1974 by Degasperis et al. [4] However it has to be mentioned that Alan Turing described it in 1954:[5] It is easy to show using standard theory that if a system starts in an eigenstate of some observable, and measurements are made of that observable N times a second, then, even if the state is not a stationary one, the probability that the system will be in the same state after, say, one second, tends to one as N tends to infinity; that is, that continual observations will prevent motion …— Alan Turing as quoted by A. Hodges in Alan Turing: Life and Legacy of a Great Thinker p. 54 resulting in the earlier name Turing paradox. One should also mention another crucial problem related to the effect. Description[edit] In 1989, David J. Notes[edit]

Aharonov–Bohm effect Werner Ehrenberg and Raymond E. Siday first predicted the effect in 1949,[3] and similar effects were later published by Yakir Aharonov and David Bohm in 1959.[4] After publication of the 1959 paper, Bohm was informed of Ehrenberg and Siday's work, which was acknowledged and credited in Bohm and Aharonov's subsequent 1961 paper.[5][6] Subsequently, the effect was confirmed experimentally by several authors; a general review can be found in Peshkin and Tonomura (1989).[7] Significance[edit] The Aharonov–Bohm effect is important conceptually because it bears on three issues apparent in the recasting of (Maxwell's) classical electromagnetic theory as a gauge theory, which before the advent of quantum mechanics could be argued to be a mathematical reformulation with no physical consequences. The Aharonov–Bohm thought experiments and their experimental realization imply that the issues were not just philosophical. The three issues are: Potentials vs. fields[edit] Magnetic solenoid effect[edit] .

Schrödinger's cat Schrödinger's cat: a cat, a flask of poison, and a radioactive source are placed in a sealed box. If an internal monitor detects radioactivity (i.e. a single atom decaying), the flask is shattered, releasing the poison that kills the cat. The Copenhagen interpretation of quantum mechanics implies that after a while, the cat is simultaneously alive and dead. Schrödinger's cat is a thought experiment, sometimes described as a paradox, devised by Austrian physicist Erwin Schrödinger in 1935.[1] It illustrates what he saw as the problem of the Copenhagen interpretation of quantum mechanics applied to everyday objects. Origin and motivation[edit] Real-size cat figure in the garden of Huttenstrasse 9, Zurich, where Erwin Schrödinger lived 1921 – 1926. The thought experiment[edit] Schrödinger wrote:[1][10] One can even set up quite ridiculous cases. You are the only contemporary physicist, besides Laue, who sees that one cannot get around the assumption of reality, if only one is honest.

General Relativity For Tellytubbys General Relativity For Teletubbies Special Relativity, Postulate 1 Sir Kevin Aylward B.Sc., Warden of the Kings Ale Back to the Contents section Overview This section is about clarifying what the 1st postulate of Special Relativity really means, i.e. the uniform motion one. "Mathematics was not sufficiently refined in 1917 to cleave apart the demands for "no prior geometry" and for a geometric, co-ordinate independent formulation of physics. This statement essentially says that "Relativity" was used as a backbone for General Relativity, but was mistakenly referred to as "covariance". This confusion still persists today, even for those with Ph.D. Postulate 1 of Special Relativity Many words and phrases abound, that all profess to be cast under the banner of the "Principle of Relativity" or POR. 1 The laws of physics are independent of inertial frames. 2 The mathematical form of the laws of physics are independent of co-ordinate systems. 3 All uniform or inertial motion is relative. Etc… etc…

Elitzur–Vaidman bomb tester Bomb-testing problem diagram. A - photon emitter, B - bomb to be tested, C,D - photon detectors. Mirrors in the lower left and upper right corners are half-silvered. In physics, the Elitzur–Vaidman bomb-testing problem is a thought experiment in quantum mechanics, first proposed by Avshalom Elitzur and Lev Vaidman in 1993.[1] An actual experiment demonstrating the solution was constructed and successfully tested by Anton Zeilinger, Paul Kwiat, Harald Weinfurter, and Thomas Herzog from the University of Innsbruck, Austria and Mark A. Problem[edit] Consider a collection of bombs, of which some are duds. Solution[edit] Start with a Mach–Zehnder interferometer and a light source which emits single photons. When a photon's state is non-deterministically altered, such as interacting with a half-silvered mirror where it non-deterministically passes through or is reflected, the photon undergoes quantum superposition, whereby it takes on all possible states and can interact with itself. P.