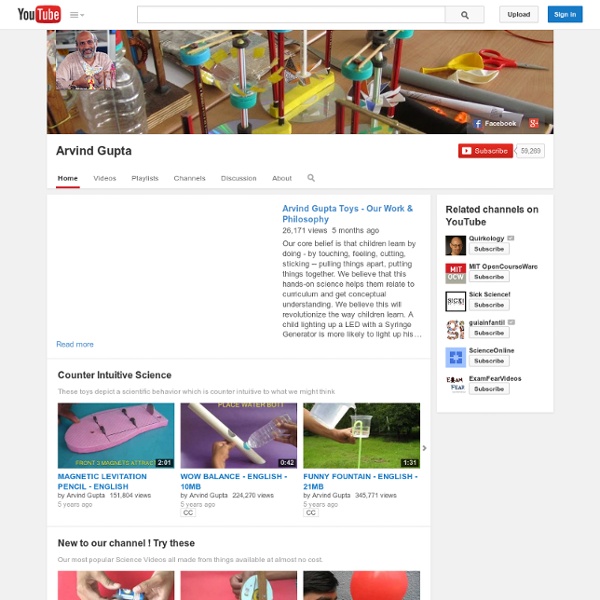 Our core belief is that children learn by doing - by touching, feeling, cutting, sticking -- pulling things apart, putting things together. We believe that this hands-on science helps them relate to curriculum and get conceptual understanding. We believe this will revolutionize the way children learn. A child lighting up a LED with a Syringe Generator is more likely to light up his village tomorrow. Our approach is inclusive. All the materials used in our activities are very affordable and accessible to every child across the globe, developing or developed countries alike. Ours is the most cost effective outreach program in the world, with cost of 15 paisa per person (0.2 cents per person). Our Goal We want to design science and math activities to comprehensively cover the whole curriculum.

Edible/Inedible Experiments Archive Science should be fun.. science should be edible.. Try your hand at experimental science! Some experiments may be eaten before, during or after the experiment, and some should not be eaten at all! Grid Paper PDFs Free Online Graph Paper / Grid Paper PDFs Downloadable and very printable, I find these PDFs extremely useful. Tip number one! La ligne d'eau Have you seen traveling water, i.e. water traveling from one cup to another without being close together or one directly above the other. It can be easily done with the help of a string! In this experiment, you will find out that water doesn’t just flow in river. It can flow on a string, too. It’s not magic. It’s science! Christmas star › Tricks (ABC Science) The Surfing Scientist › Tricks Celebrate the Yuletide with this classic trick. Five wooden toothpicks, a straw and some water are all you need to be the Christmas dinner science star. By Ruben Meerman

Cymatics Resonance made visible with black seeds on a harpsichord soundboard Cornstarch and water solution under the influence of sine wave vibration Cymatics (from Greek: κῦμα "wave") is the study of visible sound co vibration, a subset of modal phenomena. Typically the surface of a plate, diaphragm, or membrane is vibrated, and regions of maximum and minimum displacement are made visible in a thin coating of particles, paste, or liquid.[1] Different patterns emerge in the excitatory medium depending on the geometry of the plate and the driving frequency. The apparatus employed can be simple, such as the old Chinese spouting bowl, or Chinese singing fountain, in which copper handles are rubbed and cause the copper bottom elements to vibrate.

Le canon à air "rond de fumée" Playing with an air canon is always fun. You can use it to propel little tissue balls or have a race to see who can make the balls fly the farthest. But did you know that you can also make a smoke ring with it? Healthy Kids : Healthy Kids Activities Think a vegetable can’t teach you anything? Well think again! Try these cool experiments and activities and see what you learn! Colourful celery experiment Place a celery stalk in a clear container. Theremin This article is about the instrument. For the inventor, see Léon Theremin. The theremin (/ˈθɛrəmɪn/[1] THERR-ə-min; originally known as the ætherphone/etherphone, thereminophone[2] or termenvox/thereminvox), is an early electronic musical instrument controlled without physical contact by the thereminist (performer). It is named after the Westernized name of its Russian inventor, Léon Theremin, who patented the device in 1928. On July 20, 2013, a group of 272 theremin players (Matryomin ensemble) in Hamamatsu, Shizuoka, Japan, achieved a Guinness world record as the largest theremin ensemble. (YouTube link) The name Matryomin is a portmanteau of the words matryoshka and theremin.

Science Fair Ideas Video for Kids - Be captivated watching the excellent selected and really easy to understand Science Fair Ideas facts for kids video: This is a great video that shows fun experiments you can do that is about exothermic reactions. With this video, you will be able to see the “hot ice” experiment, which turns water into ice with just a touch of a finger. You will find a list of the materials needed for this project in the video. The video will show the step by step tutorial on how to make this project and demonstrates different kinds of experiments that show the same principle.

Shimeji English Enhanced Shimeji is a Windows desktop mascot that freely wanders and plays around the screen. The mascot is very configurable; its actions are defined through xml and its animations/images can be customized. Shimeji was originally created by Yuki Yamada of Group Finity ( This branch of the original Shimeji project not only translates the program/source to English, but aims to additionally enhance Shimeji as well. Comment créer un livre 3D! An anaglyph is made of two superimposed images, but a little offset, consisting of red (most often found on the left) and cyan (most often found on the right). The space between the 2 images (also called parallax) is not the same everywhere, is not constant. To create the relief effect, we must use red and cyan (mix between green and blue) filters like the anaglyph's colors. The eye with the red filter will not filter the red image but will block the blue one.

Make a Liquid Layers Density Column When you see liquids stack on top of each other in layers, it's because they have different densities from each other and don't mix well together. You can make a density column—also known as a density tower—with many liquid layers using common household liquids. This is an easy, fun and colorful science project that illustrates the concept of density. Density Column Materials You can use some or all of these liquids, depending on how many layers you want and which materials you have handy.