Ten Psychology Studies from 2009 Worth Knowing About - David DiSalvo - Brainspin 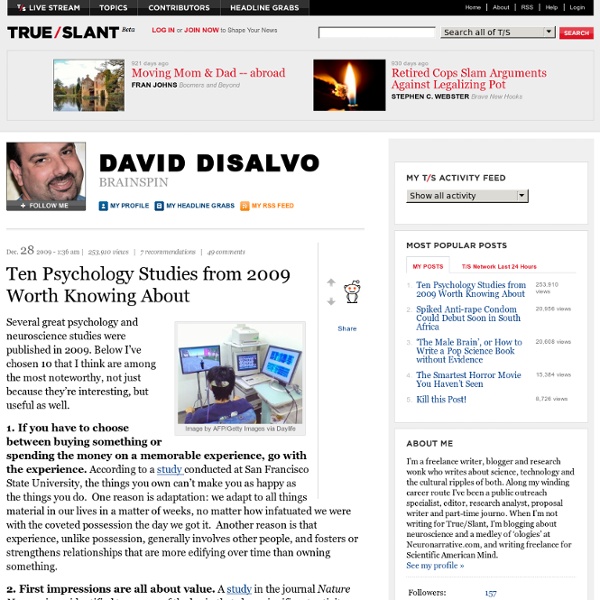 Image by AFP/Getty Images via Daylife Several great psychology and neuroscience studies were published in 2009. Below I’ve chosen 10 that I think are among the most noteworthy, not just because they’re interesting, but useful as well. 1. If you have to choose between buying something or spending the money on a memorable experience, go with the experience. According to a study conducted at San Francisco State University, the things you own can’t make you as happy as the things you do. 2. 3. 4. 5. 6. 7. 8. 9. 10. Related:  Psychology

Does the comfort of conformity ease thoughts of death? - life - 25 February 2011 AS THE light at the end of the tunnel approaches, the need to belong to a group and be near loved ones may be among your final thoughts. So say Markus Quirin and his colleagues at the University of Osnabrück in Germany. The team prompted thoughts of death in 17 young men with an average age of 23 by asking them whether they agreed or disagreed with a series of statements such as "I am afraid of dying a painful death". At the same time, the men's brain activity was monitored using a functional MRI scanner. To compare the brain activity associated with thoughts of death with that coupled to another unpleasant experience, the team also prompted thoughts of dental pain using statements like "I panic when I am sitting in the dentist's waiting room". Although the threat of dental pain is unpleasant, "it's not a threat of death", Quirin says. Quirin thinks the work of German philosopher Martin Heidegger could explain the unexpected result. New Scientist Not just a website! Sentient robots?

Why Intelligent People Drink More Alcohol Drinking alcohol is evolutionarily novel, so the Hypothesis would predict that more intelligent people drink more alcohol than less intelligent people. The human consumption of alcohol probably originates from frugivory (consumption of fruits). Fermentation of sugars by yeast naturally present in overripe and decaying fruits produces ethanol, known to intoxicate birds and mammals. Human consumption of alcohol, however, was unintentional, accidental, and haphazard until about 10,000 years ago. Human experience with concentrations of ethanol higher than 5% that is attained by decaying fruits is therefore very recent. Consistent with the prediction of the Hypothesis , more intelligent children, both in the United Kingdom and the United States, grow up to consume alcohol more frequently and in greater quantities than less intelligent children.

Intelligence: The Evolution of Night Owls IQs and Zs Night owls are smarter than other people, and now we may know why. The modern world contains many features our slow-to-evolve brains still find unfamiliar—cars, TVs, hot dogs on a stick. But the world has always thrown new stuff at us, and brighter humans may adapt more ably. Satoshi Kanazawa, a psychologist at The London School of Economics and Political Science, argues that, while we have specialized mental modules for navigation, social interaction, and other age-old tasks, general intelligence is its own module handling only evolutionarily novel circumstances. A previous study found that evening people are smarter than morning people. Night Lights

Some Moral Dilemmas The Trolley Problem, not in Grassian. Suggested by Philippa Foot (1920-2010), daughter of Esther, the daughter of President Grover Cleveland, but of British birth because of her father, William Sidney Bence Bosanquet. A trolley is running out of control down a track. In its path are five people who have been tied to the track by a mad philosopher. Fortunately, you could flip a switch, which will lead the trolley down a different track to safety. Unfortunately, there is a single person tied to that track. This is a classic "right vs. good" dilemma. The Costly Underwater Tunnel Compare: 112 men were killed during the construction of Hoover Dam on the Nevada-Arizona border (the "official" number was 98, but others had died from causes more difficult to identify -- or easier to ignore -- like by carbon monoxide poisoning): The first to die was a surveyor, J.G.

Hedgehog's dilemma Both Arthur Schopenhauer and Sigmund Freud have used this situation to describe what they feel is the state of individual in relation to others in society. The hedgehog's dilemma suggests that despite goodwill, human intimacy cannot occur without substantial mutual harm, and what results is cautious behavior and weak relationships. With the hedgehog's dilemma, one is recommended to use moderation in affairs with others both because of self-interest, as well as out of consideration for others. Schopenhauer[edit] The concept originates in the following parable from the German philosopher Arthur Schopenhauer's Parerga und Paralipomena, Volume II, Chapter XXXI, Section 396:[1] A number of porcupines huddled together for warmth on a cold day in winter; but, as they began to prick one another with their quills, they were obliged to disperse. Freud[edit] It entered the realm of psychology after the tale was discovered and adopted by Sigmund Freud. Social psychological research[edit]

The fine dopamine line between creativity and schizophrenia New research shows a possible explanation for the link between mental health and creativity. By studying receptors in the brain, researchers at the Swedish medical university Karolinska Institutet have managed to show that the dopamine system in healthy, highly creative people is similar in some respects to that seen in people with schizophrenia. High creative skills have been shown to be somewhat more common in people who have mental illness in the family. Creativity is also linked to a slightly higher risk of schizophrenia and bipolar disorder. "We have studied the brain and the dopamine D2 receptors, and have shown that the dopamine system of healthy, highly creative people is similar to that found in people with schizophrenia," says associate professor Fredrik Ullén from Karolinska Institutet's Department of Women's and Children's Health. "Thinking outside the box might be facilitated by having a somewhat less intact box," says Dr Ullén about his new findings.

Carol Smaldino: In the Shadows of &quot;Our&quot; Torture Writing from her summer home in Borgo a Mozzano, Lucca, Italy The subject of torture is not new. It isn't new for Army Sergeant Joseph Darby who honorably brought the brutal photos of incidents of torture in Abu Ghraib to his commanding officer in January 2004. It isn't new for all those whose lives are over in one way or another, or for those who suffer still and who were savagely and brutally mistreated with wanton sadism. It isn't new for those who care. The videos of horrific and vicious and even gleeful acts of American soldiers torturing Iraqis aren't new either. The suddenness of something not really new at all brings up one of the meanings of our distraction; here our avoidance of what might now seem an obvious set of crimes against humanity. In psychology, the "shadow" is a term coined by psychoanalyst Carl Jung to refer to the parts within ourselves which repel, disgust and/or frighten us. After all, it wasn't us. The shadow hadn't been one of my personal favorites either.