Animals Whose Lives Were Changed Thanks To Prosthetics. 6 Examples of Bionic Animals in Real Life. Scientists Can Now Extract, Record and Return Information To the Brain. ​Scientists learn to selectively erase and restore memories in brain. Published time: June 04, 2014 23:41 Edited time: June 06, 2014 23:19 Reuters / STR Wiping out memories at a press of a button – just like with a ‘neuralizer’ from the Men in Black movie – may soon become a reality. 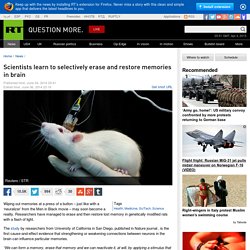 Researchers have managed to erase and then restore lost memory in genetically modified rats with a flash of light. The study by researchers from University of California in San Diego, published in Nature journal , is the first cause-and-effect evidence that strengthening or weakening connections between neurons in the brain can influence particular memories.

“We can form a memory, erase that memory and we can reactivate it, at will, by applying a stimulus that selectively strengthens or weakens synaptic connections,” study senior researcher Dr. The neuroscientists’ findings may hold big potential for the treatment of such diseases as Alzheimer's and post-traumatic stress disorder (PTSD). Scientists Wipe Memories of Drug Addiction from Mice - Futurism. In Brief Researchers at the Scripps Research Institute believe they've found a way to wipe away the memory triggers that often cause meth addicts to relapse. 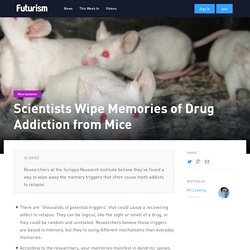 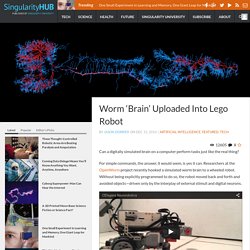 For simple commands, the answer, it would seem, is yes it can. Researchers at the OpenWorm project recently hooked a simulated worm brain to a wheeled robot. Without being explicitly programmed to do so, the robot moved back and forth and avoided objects—driven only by the interplay of external stimuli and digital neurons. While there are already similarly capable robots using traditional software, the research shows a digitally simulated brain can behave like its biological analog, and the demonstration has implications for big brain projects. Animal Brains Networked Into Organic Computer ‘Brainet’ - Singularity HUB. Imagine a future where computers no longer run on silicon chips. 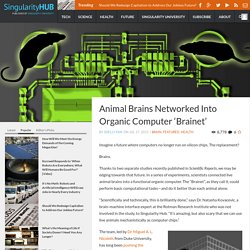 The replacement? Brains. Thanks to two separate studies recently published in Scientific Reports, we may be edging towards that future. In a series of experiments, scientists connected live animal brains into a functional organic computer. The “Brainet”, as they call it, could perform basic computational tasks—and do it better than each animal alone. “Scientifically and technically, this is brilliantly done,” says Dr. The team, led by Dr. The new cutting-edge eschews arms—robotic or virtual—altogether, and goes directly brain-to-brain. Researchers Connect Animal Brains To Share Thoughts and Solve Challenging Problems - Futurism. Successful experiments have shown that it is possible to link brains to make an "organic computer" that can synchronize thoughts and communicate between minds. 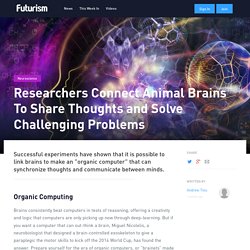 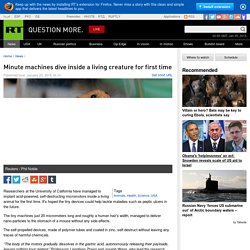 It's hoped the tiny devices could help tackle maladies such as peptic ulcers in the future. The tiny machines just 20 micrometers long and roughly a human hair's width, managed to deliver nano-particles to the stomach of a mouse without any side effects. The self-propelled devices, made of polymer tubes and coated in zinc, self-destruct without leaving any traces of harmful chemicals. “The body of the motors gradually dissolves in the gastric acid, autonomously releasing their payloads, leaving nothing toxic behind,” Professors Liangfang Zhang and Joseph Wang, who lead the research, wrote in the journal ACS Nano.

Real Jurassic World not far from reality? Teaser poster of Jurassic World (2015) (credit: Universal Pictures) Jurassic World, the fourth installment in the successful film series, in theaters June 12, will take viewers back to a world in which dinosaurs have been revived. 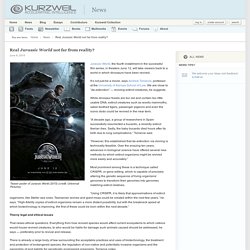 It’s not just be a movie, says Andrew Torrance, professor at the University of Kansas School of Law. We are close to “de-extinction” — reviving extinct creatures, he suggests. While dinosaur fossils are too old and contain too little usable DNA, extinct creatures such as woolly mammoths, saber-toothed tigers, passenger pigeons and even the iconic dodo could be revived in the near term. Chicken Embryos With Dinosaur Snouts Created in Lab. Gene therapy restores hearing in deaf mice. The inverted V’s above are sensory hair bundles in the ear, each containing 50 to 100 microvilli tipped with TMC proteins. 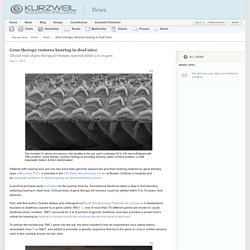 Gene therapy restores hearing by providing working copies of those proteins. (credit: Gwenaelle Geleoc & Artur Indzhykulian) Patients with hearing loss will one day have their genome sequenced and their hearing restored by gene therapy, says Jeffrey Holt, PhD, a scientist in the F.M. Kirby Neurobiology Center at Boston Children’s Hospital and an associate professor of Otolaryngology at Harvard Medical School. Researchers Restore Hearing in Deaf Mice - Futurism. Page 1 of 24012345...102030...»Last » 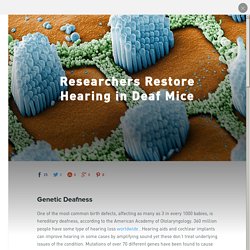