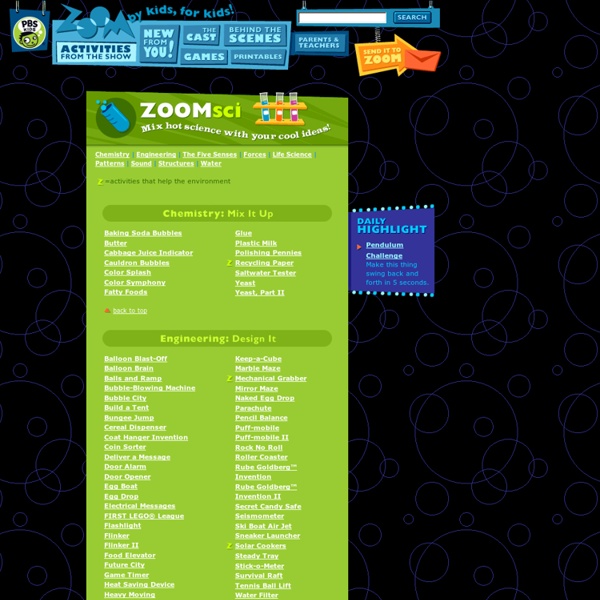 Roller Coaster Game Welcome to the death defying Funderstanding Roller Coaster! This simulator is designed for people who want to design their own thrilling coaster and educators who want to use a cool activity to simulate the application of physics by using an exciting interactive tool and access to a wonderful reference source. It is your mission to become a roller coaster designer so that you can achieve maximum thrills and chills without crashing or flying off the track (unless that’s how you like your coaster to work!). If you accept this mission you must decide on a number of factors. You are responsible for setting the controls for the height of hill #1, hill #2, the size of the loop, the initial speed of the coaster, its mass, the gravity at work and the amount of friction on the track.

Edible/Inedible Experiments Archive Science should be fun.. science should be edible.. Try your hand at experimental science! Some experiments may be eaten before, during or after the experiment, and some should not be eaten at all! Browse Content by SOL Browse Content by SOL K1st2nd3rd4th5th6th7th8th9th10th11th12th Kindergarten SOLs Science fair projects So your teacher has assigned science fair projects to your entire class? Well, DON'T PANIC! Whether you are doing elementary, middle school or high school science fair projects, a science fair can actually be fun! It all depends on your attitude, and getting the right information before you even start. It's not just educational, but it may be one of your few chances to show off your creativity and initiative. Galileo Drops the Ball - Virtual Experiment In around 1590 Galileo Galilei (1564-1642) climbed up the Leaning Tower of Pisa and dropped some balls to the ground. Two balls of different masses, but of similar shape and density that were released together hit the ground at the same time. Until then it was commonly believed that heavy things fall faster than light things.

Christmas star › Tricks (ABC Science) The Surfing Scientist › Tricks Celebrate the Yuletide with this classic trick. Five wooden toothpicks, a straw and some water are all you need to be the Christmas dinner science star. By Ruben Meerman Spread Of Plant Diseases By Insects Can Be Described By Equations That Model Interplanetary Gravity Researchers from Penn State University and the University of Virginia show that the spread of diseases by insects can be described by equations similar to those that describe the force of gravity between planetary objects. Their findings are detailed in the September issue of The American Naturalist. Insects tend to transmit diseases in the course of feeding on plants, and their movement between plants is influenced by plant quality (how good of a meal they'll get) and the distance between plants, or, how far they'll have to travel to get to the next meal, explain Matthew Ferrari, Jessica Partain, Janis Antonovics, and Ottar Bjornstad. "It turns out insects are more likely to move shorter distances between better plants," write the authors.

Force and Motion Facts Motion makes the world go 'round. Motion makes the moon go 'round too. In fact, motion makes lots of things go. When we think of motion we often think of cars, bicycles, kids running, basketballs bouncing and airplanes flying. Science Fair Ideas Video for Kids - Be captivated watching the excellent selected and really easy to understand Science Fair Ideas facts for kids video: This is a great video that shows fun experiments you can do that is about exothermic reactions. With this video, you will be able to see the “hot ice” experiment, which turns water into ice with just a touch of a finger. You will find a list of the materials needed for this project in the video. The video will show the step by step tutorial on how to make this project and demonstrates different kinds of experiments that show the same principle.

v5.0 : Main View : Search Results for Full Record: bites mosquito understanding Note: This page contains sample records for the topic bites mosquito understanding from Science.gov. While these samples are representative of the content of Science.gov, they are not comprehensive nor are they the most current set. We encourage you to perform a real-time search of Science.gov to obtain the most current and comprehensive results.Last update: November 12, 2013. Motion: Forces Forces are a big part of physics. Physicists devote a lot of time to the study of forces that are found everywhere in the universe. The forces could be big, such as the pull of a star on a planet. The forces could also be very small, such as the pull of a nucleus on an electron. Forces are acting everywhere in the universe at all times.

Make a Liquid Layers Density Column Make a density column with many liquid layers using common household liquids. This is an easy, fun and colorful science project that illustrates the concept of density. Density Column Materials You can use some or all of these liquids, depending on how many layers you want and which materials you have handy. These liquids are listed from most-dense to least-dense, so this is the order in which you pour them into the column.honeycorn syrup or pancake syrupliquid dishwashing soapwater (can be colored with food coloring)vegetable oil rubbing alcohol (can be colored with food coloring)lamp oil