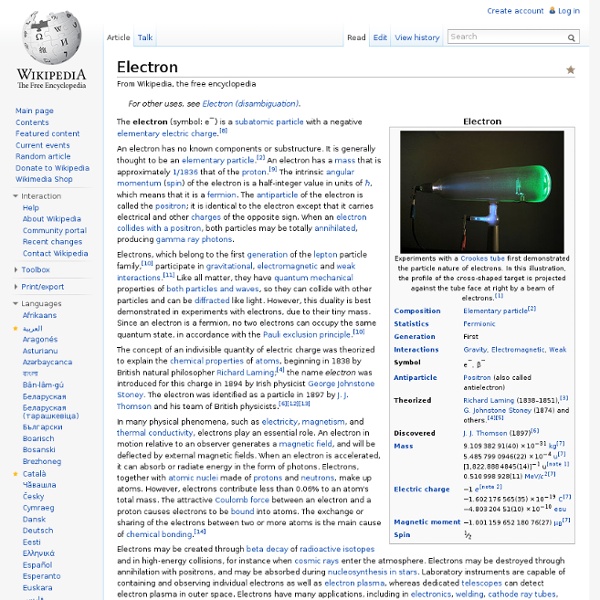 History[edit] In the early 1700s, Francis Hauksbee and French chemist Charles François de Fay independently discovered what they believed were two kinds of frictional electricity—one generated from rubbing glass, the other from rubbing resin. From this, Du Fay theorized that electricity consists of two electrical fluids, vitreous and resinous, that are separated by friction, and that neutralize each other when combined.[17] A decade later Benjamin Franklin proposed that electricity was not from different types of electrical fluid, but the same electrical fluid under different pressures. He gave them the modern charge nomenclature of positive and negative respectively.[18] Franklin thought of the charge carrier as being positive, but he did not correctly identify which situation was a surplus of the charge carrier, and which situation was a deficit.[19] Discovery[edit] A beam of electrons deflected in a circle by a magnetic field[25] Robert Millikan Atomic theory[edit]

Frequently Asked Questions in Cosmology Tutorial : Part 1 | Part 2 | Part 3 | Part 4 | Age | Distances | Bibliography | Relativity What is the currently most accepted model for the Universe? The current best fit model is a flat ΛCDM Big Bang model where the expansion of the Universe is accelerating, and the age of the Universe is 13.7 billion years. Back to top. What is the evidence for the Big Bang? The evidence for the Big Bang comes from many pieces of observational data that are consistent with the Big Bang. The darkness of the night sky - Olbers' paradox. Why do we think that the expansion of the Universe is accelerating? The evidence for an accelerating expansion comes from observations of the brightness of distant supernovae. What is quintessence? Quintessence, or the fifth essence, is a fifth element beyond the standard earth, air, fire and water of ancient chemistry. If the Universe is only 14 billion years old, why isn't the most distant object we can see 7 billion light years away? What is the redshift?

Magnetism A magnetic quadrupole Magnetism is a class of physical phenomena that includes forces exerted by magnets on other magnets. It has its origin in electric currents and the fundamental magnetic moments of elementary particles. These give rise to a magnetic field that acts on other currents and moments. All materials are influenced to some extent by a magnetic field. The magnetic state (or phase) of a material depends on temperature (and other variables such as pressure and the applied magnetic field) so that a material may exhibit more than one form of magnetism depending on its temperature, etc. History[edit] In ancient China, the earliest literary reference to magnetism lies in a 4th-century BC book named after its author, The Master of Demon Valley (鬼谷子): "The lodestone makes iron come or it attracts it Alexander Neckam, by 1187, was the first in Europe to describe the compass and its use for navigation. Michael Faraday, 1842 Sources of magnetism[edit] Topics[edit] Diamagnetism[edit]

Ununoctium The radioactive ununoctium atom is very unstable, due to its high mass, and since 2005, only three or possibly four atoms of the isotope 294Uuo have been detected.[12] While this allowed for very little experimental characterization of its properties and possible compounds, theoretical calculations have resulted in many predictions, including some unexpected ones. For example, although ununoctium is a member of Group 18, it may possibly not be a noble gas, unlike all the other Group 18 elements.[1] It was formerly thought to be a gas but is now predicted to be a solid under normal conditions due to relativistic effects.[1] History[edit] Unsuccessful synthesis attempts[edit] In late 1998, Polish physicist Robert Smolańczuk published calculations on the fusion of atomic nuclei towards the synthesis of superheavy atoms, including ununoctium.[13] His calculations suggested that it might be possible to make ununoctium by fusing lead with krypton under carefully controlled conditions.[13]

History of electromagnetism The history of electromagnetic theory begins with ancient measures to deal with atmospheric electricity, in particular lightning.[1] People then had little understanding of electricity, and were unable to scientifically explain the phenomena.[2] In the 19th century there was a unification of the history of electric theory with the history of magnetic theory. It became clear that electricity should be treated jointly with magnetism, because wherever electricity is in motion, magnetism is also present.[3] Magnetism was not fully explained until the idea of magnetic induction was developed.[4] Electricity was not fully explained until the idea of electric charge was developed. Ancient and classical history[edit] The knowledge of static electricity dates back to the earliest civilizations, but for millennia it remained merely an interesting and mystifying phenomenon, without a theory to explain its behavior and often confused with magnetism. Middle Ages and the Renaissance[edit]

Standard Model The Standard Model of particle physics is a theory concerning the electromagnetic, weak, and strong nuclear interactions, as well as classifying all the subatomic particles known. It was developed throughout the latter half of the 20th century, as a collaborative effort of scientists around the world.[1] The current formulation was finalized in the mid-1970s upon experimental confirmation of the existence of quarks. Since then, discoveries of the top quark (1995), the tau neutrino (2000), and more recently the Higgs boson (2013), have given further credence to the Standard Model. Although the Standard Model is believed to be theoretically self-consistent[2] and has demonstrated huge and continued successes in providing experimental predictions, it does leave some phenomena unexplained and it falls short of being a complete theory of fundamental interactions. Historical background[edit] Overview[edit] Particle content[edit] Fermions[edit] Gauge bosons[edit] Higgs boson[edit] Challenges[edit]

Radiation Illustration of the relative abilities of three different types of ionizing radiation to penetrate solid matter. Typical alpha particles (α) are stopped by a sheet of paper, while beta particles (β) are stopped by an aluminium plate. Gamma radiation (γ) is damped when it penetrates lead. Note caveats in the text about this simplified diagram. In electromagnetic radiation (such as microwaves from an antenna, shown here) the term "radiation" applies only to the parts of the electromagnetic field that radiate into infinite space and decrease in intensity by an inverse-square law of power so that the total radiation energy that crosses through an imaginary spherical surface is the same, no matter how far away from the antenna the spherical surface is drawn. Gamma rays, x-rays and the higher energy range of ultraviolet light constitute the ionizing part of the electromagnetic spectrum. Ionizing radiation[edit] Ultraviolet radiation[edit] Main article: Ultraviolet X-ray[edit] Beta radiation[edit]

Periodic table Standard 18-column form of the periodic table. The colors used in the version of the table shown here signify different categories of elements, as listed below in the Layout section, under the larger table. The rows of the table are called periods; the columns are called groups, with some of these having names such as halogens or noble gases. Since, by definition, a periodic table incorporates recurring trends, any such table can be used to derive relationships between the properties of the elements and predict the properties of new, yet to be discovered or synthesized, elements. Although precursors exist, Dmitri Mendeleev is generally credited with the publication, in 1869, of the first widely recognized periodic table. All elements from atomic numbers 1 (hydrogen) to 118 (ununoctium) have been discovered or reportedly synthesized, with elements 113, 115, 117 and 118 having yet to be confirmed. Layout Grouping methods Groups A group or family is a vertical column in the periodic table.

Hertz "Megahertz", "MHz", "Gigahertz" and "GHz" redirect here. Top to bottom: Lights flashing at frequenciesf = 0.5 Hz (hertz), 1.0 Hz and 2.0 Hz, i.e. at 0.5, 1.0 and 2.0 flashes per second, respectively. The time between each flash – the period T – is given by 1⁄f (the reciprocal of f‍), i.e. 2, 1 and 0.5 seconds, respectively. The hertz (symbol Hz) is the unit of frequency in the International System of Units (SI) and is defined as one cycle per second.[1] It is named for Heinrich Rudolf Hertz, the first person to provide conclusive proof of the existence of electromagnetic waves. One of the unit's most common uses is in the description of sine waves and musical tones, particularly those used in radio and other audio-related applications. Definition[edit] In English, "hertz" is also used as the plural form.[4] As an SI unit, Hz can be prefixed; commonly used multiples are kHz (kilohertz, 103 Hz), MHz (megahertz, 106 Hz), GHz (gigahertz, 109 Hz) and THz (terahertz, 1012 Hz). and History[edit]