Documents in Law, History and Diplomacy 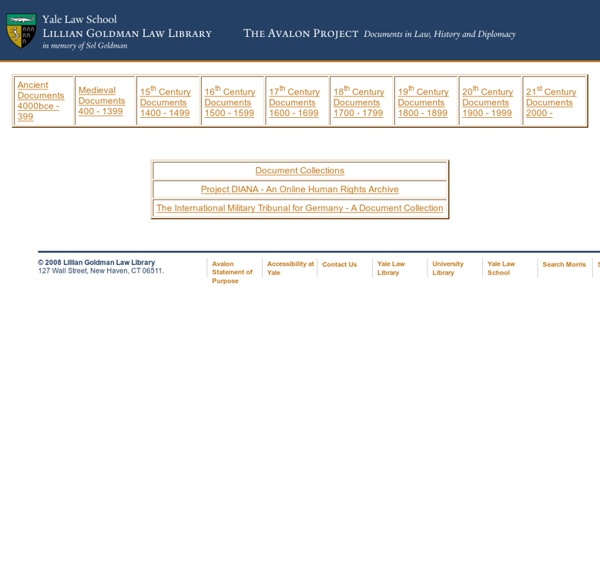 The Contested History of American Freedom No idea is more fundamental to Americans' sense of ourselves as individuals and as a nation than freedom. The central term in our political vocabulary, freedom—or liberty, with which it is almost always used interchangeably—is deeply embedded in the record of our history and the language of everyday life. The Declaration of Independence lists liberty among mankind's inalienable rights; the Constitution announces securing liberty's blessings as its purpose. Freedom has often been invoked to mobilize support for war: the United States fought the Civil War to bring about "a new birth of freedom," World War II for the "Four Freedoms," the Cold War to defend the "Free World."

Archive We preserve historical records relating to the RSA's activities and administration and make them available for research. A five-year project, funded by the Heritage Lottery Fund, other donors and the RSA, provided new storage for the archives and ensured that the majority are catalogued. The catalogue is a guide to the records in the RSA Archive. Prof. John Paul Adams Department of Modern and Classical Languages and LiteraturesCollege of Humanities OFFICE HOURS: None. "Adding to the store of human knowledge ... is one of the noblest activities of a public University." - Lee Bollinger, President, Columbia University European Views of the Americas: 1493-1750 Content Includes: More than 32,000 records Coverage of European exploration and portrayals of Native American peoples Subjects include: British in America Commerce Discoveries Dutch in America French in America Great Britain—Colonies Jesuits (and other religious orders) in America Pirates Slave trade This free historical archive is a comprehensive guide to printed records about the Americas written in Europe before 1750 from European Americana: A Chronological Guide to Works Printed In Europe Relating to the Americas, 1493-1750. Try it now for free. This authoritative bibliography is well-known and respected by scholars worldwide, and a valuable index for libraries, researchers and individuals interested in European works that relate to the Americas.

Appraising the Electoral College - Bill of Rights Institute Every four years Americans head to the polls to select the presidential candidate they like best. Most people think their vote is a direct link to the candidate of their choice – but things aren’t quite that simple. In reality, individuals vote for an elector who has pledged to vote for a particular candidate.

story - About Many people relate to and learn about historical people, places, and events through film. And, even though many historians love to kvetch about the historical inaccuracies of films that portray the past, we simply cannot ignore the fact that the public interacts with and learns about history primarily through film. What we can do instead is talk about the events of the past represented in film and use that dialogue as a place of learning. As life-long students of both film and history, we searched for an interactive resource that not only explores the relationship between film and history, but also starts a conversation and provides interaction; yet, nothing expansive or truly interactive exists. Therefore, a small group of passionate friends got together and created FilmStory.