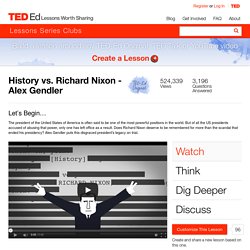 There is plenty more to understand about Richard M. Nixon. Here is a link to the Nixon Library where you can find out about his childhood, family, and post-presidency. Still interested in who Richard Nixon really was and where he came from? Visit the White House site to learn about the 37th president and his first lady, Patricia Ryan Nixon. Take a closer look at Nixon’s often-overlooked accomplishments and environmental initiatives, as well as an explanation of his actions and the context in which they occurred. But don’t forget about the seriousness of the Watergate crimes, the terrible legacy of the Chilean coup, and what recently declassified tapes reveal about his campaign’s interference in the Vietnam peace efforts. Women's History Month: Six Lesson Plan Resources for Teachers. March is Women’s History Month, and International Women’s Day, March 8, is also a part of the celebration each year.

For educators and students, the month provides a wonderful opportunity to explore and dig deeper into women’s contributions, struggles, and triumphs throughout history. A great place to start is the National Women’s History project, where students can explore this year’s theme, “Nevertheless, She Persisted: Honoring Women Who Fight All Forms of Discrimination Against Women.” Teachers will find some great resources for incorporating women’s history into lessons this month and beyond, as well as for exploring gender roles and stereotypes with students. TeachingHistory.org’s Women’s History Resources: This is a one-stop shop for diving deep into Women’s History Month. Educators will find learning resources, lesson plans, and a long list of quizzes and printables for the classroom. Discussing Gender Roles and Stereotypes in Class. John Marshall, Marbury v. Madison, and Judicial Review—How the Court Became Supreme. Activity 1. 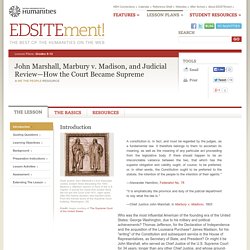 Activity 2. Students should read this short background piece about Marbury v. What was William Marbury's complaint and how did it arise? Interactive U.S. history series for tablets. Unbreakable: Remembering the Code Talkers. Navajo Code Talkers Henry Bake and George Kirk, 12/1943 (ARC 593415) Keith Hill passed away yesterday at the age of 87. 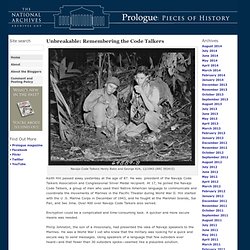 He was president of the Navajo Code Talkers Association and Congressional Silver Medal recipient. At 17, he joined the Navajo Code Talkers, a group of men who used their Native American language to communicate and coordinate the movements of Marines in the Pacific Theater during World War II. Hill started with the U .S. Marine Corps in December of 1943, and he fought at the Marshall Islands, Sai Pan, and Iwo Jima. Encryption could be a complicated and time-consuming task. New Pearl Harbor Interactive from National Geographic. Teacher Community : The Colonial Williamsburg Official History & Citizenship Site. Digital Classroom. Welcome to one of the largest online collections of primary sources and historical periodicals about the women's suffrage movement. 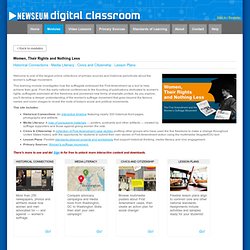 This learning module investigates how the suffragists embraced the First Amendment as a tool to help achieve their goal. From the early national conferences to the founding of publications dedicated to women's rights, suffragists exercised all five freedoms and pioneered new forms of dramatic protest. As you explore, you'll develop a deeper understanding of the women's suffrage movement that goes beyond the famous names and iconic images to reveal the roots of today's social and political movements.

This site includes: There's more to see and do! History by Era. Federalist-Antifederalist Debates. Abraham Lincoln Papers at the Library of Congress.