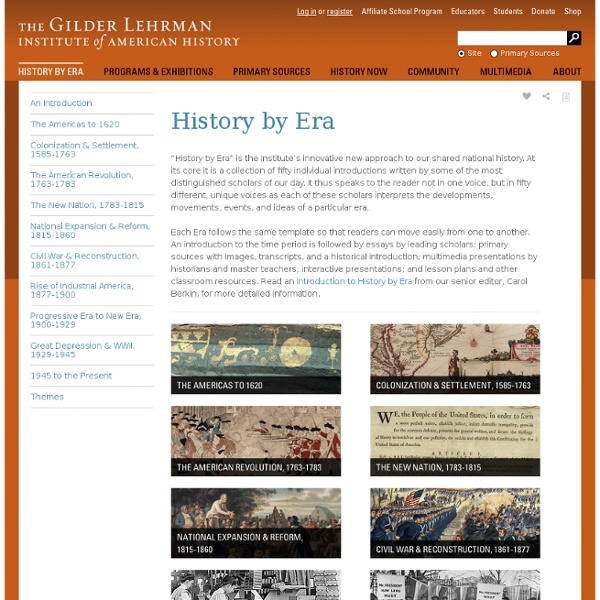 Digital Classroom | Home Welcome to one of the largest online collections of primary sources and historical periodicals about the women's suffrage movement. This learning module investigates how the suffragists embraced the First Amendment as a tool to help achieve their goal. From the early national conferences to the founding of publications dedicated to women's rights, suffragists exercised all five freedoms and pioneered new forms of dramatic protest. As you explore, you'll develop a deeper understanding of the women's suffrage movement that goes beyond the famous names and iconic images to reveal the roots of today's social and political movements. This site includes: There's more to see and do!

Best Sites for Primary Documents in World History Common Core offers an incentive for teachers to use historic documents to build literacy skills in a content area while empowering students to be the historian in the classroom. But document-based (DBQ) instruction in this context requires four key elements to be successful: The right documents. Knowing how to look at them. I've assigned my pre-service social studies methods class the task of designing some DBQs and I assembled a list of some of my favorite sources for finding historic documents in World History. All these sites feature good search engines and the ability to download documents for use in classroom projects. Avalon Project The Avalon Project contains a vast collection digital documents relevant to the fields of Law, History, Economics, Politics, Diplomacy and Government. Musicians and an acrobat, Smithfield Decretals (Brit. The Commons / Flickr The goal of The Commons is to share hidden treasures from the world's public photography archives.

Unbreakable: Remembering the Code Talkers Navajo Code Talkers Henry Bake and George Kirk, 12/1943 (ARC 593415) Keith Hill passed away yesterday at the age of 87. He was president of the Navajo Code Talkers Association and Congressional Silver Medal recipient. At 17, he joined the Navajo Code Talkers, a group of men who used their Native American language to communicate and coordinate the movements of Marines in the Pacific Theater during World War II. Hill started with the U .S. Encryption could be a complicated and time-consuming task. Philip Johnston, the son of a missionary, had presented the idea of Navajo speakers to the Marines. Why Navajos? But after a demonstration on February 28, 1942, General Vogel wrote to the U.S. The initial recruits came up with the code, creating a vocabulary for military terms. They created a system that signified the 26 letters of the English alphabet. Capt. The Japanese were never able to break their code. First 29 Navajo U.S.

War and medicine British Sign Language description Audio description Hippocrates is quoted as saying that ‘war is the only proper school for a surgeon’. Certainly, medical services have been associated with the military since the days of Ancient Greece. This relationship declined in the Middle Ages, but after a radical reorganisation of medicine during the 1700s the links between the two grew stronger with each passing year. War and new jobs in medicine There is much debate about how much influence war and medicine have had on each other. The human suffering caused by war War causes distress, displacement and death. Soldiers and disease Until the 1900s, wars impacted on soldiers more than the civilian population. New weapons, new wounds in the 1500s By the 1500s and 1600s guns and cannons replaced swords and spears, presenting army surgeons with new types of wounds. Developments in treatments through war The First World War: disease and developments Women in the First World War The impacts of war

John Marshall, Marbury v. Madison, and Judicial Review—How the Court Became Supreme Activity 1. What does Article III say? This case is all about the power of the Supreme Court as outlined in the Constitution in relationship to the other two branches. What is the job of the Supreme Court as described in Article III? Activity 2. Students should read this short background piece about Marbury v. What was William Marbury's complaint and how did it arise? Activity 3. What did John Marshall write about the power of the Supreme Court in the actual decision? Part 1: What is the relationship of the Constitution to ordinary laws? Excerpted from Marbury v. The authority, therefore, given to the Supreme Court by the act establishing the judicial courts of the United States to issue writs of mandamus to public officers appears not to be warranted by the Constitution, and it becomes necessary to inquire whether a jurisdiction so conferred can be exercised. It is emphatically the province and duty of the judicial department to say what the law is. First excerpt: Second excerpt:

Chemical Warfare and Medical Response During World War I Women's History Month: Six Lesson Plan Resources for Teachers March is Women’s History Month, and International Women’s Day, March 8, is also a part of the celebration each year. For educators and students, the month provides a wonderful opportunity to explore and dig deeper into women’s contributions, struggles, and triumphs throughout history. A great place to start is the National Women’s History project, where students can explore this year’s theme, “Nevertheless, She Persisted: Honoring Women Who Fight All Forms of Discrimination Against Women.” Teachers will find some great resources for incorporating women’s history into lessons this month and beyond, as well as for exploring gender roles and stereotypes with students. TeachingHistory.org’s Women’s History Resources: This is a one-stop shop for diving deep into Women’s History Month. Discussing Gender Roles and Stereotypes in Class In The Trouble With Women’s History Month from Teaching Tolerance, Maureen Costello raises a point about the need to add context.

History - World Wars: Shell Shock during World War One History vs. Richard Nixon - Alex Gendler | TED-Ed Special thanks to Stanley Kutler. There is plenty more to understand about Richard M. Nixon. Here is a link to the Nixon Library where you can find out about his childhood, family, and post-presidency. Take a closer look at Nixon’s often-overlooked accomplishments and environmental initiatives, as well as an explanation of his actions and the context in which they occurred. But don’t forget about the seriousness of the Watergate crimes, the terrible legacy of the Chilean coup, and what recently declassified tapes reveal about his campaign’s interference in the Vietnam peace efforts.