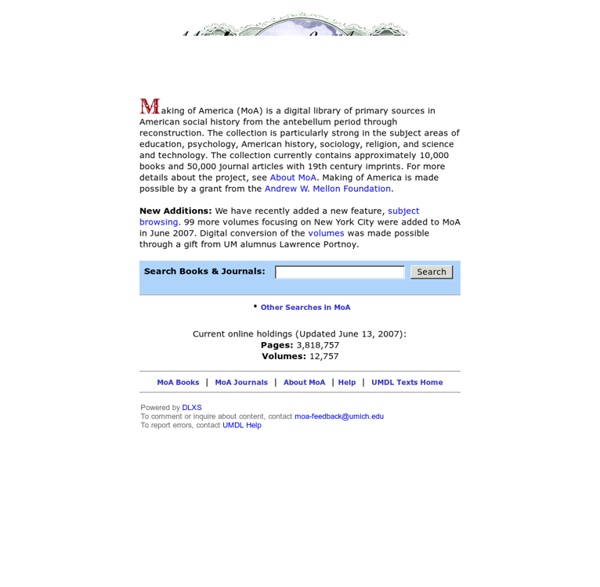 aking of America (MoA) is a digital library of primary sources in American social history from the antebellum period through reconstruction. The collection is particularly strong in the subject areas of education, psychology, American history, sociology, religion, and science and technology. The collection currently contains approximately 10,000 books and 50,000 journal articles with 19th century imprints. For more details about the project, see About MoA. Making of America is made possible by a grant from the Andrew W. Mellon Foundation. New Additions: We have recently added a new feature, subject browsing. 99 more volumes focusing on New York City were added to MoA in June 2007.

a Program of the National Park Service NEW! Arthurdale: A New Deal Community Experiment Explore Arthurdale, West Virginia, and discover a town founded during the Great Depression when First Lady Eleanor Roosevelt championed subsistence homestead communities for struggling Americans across the country. In this lesson, learn about the impoverished Appalachian mining town that Arthurdale's homesteaders left and the Progressive-era theories about communal work, school, and rural life they tested at their new home. Gin Gin is a spirit which derives its predominant flavour from juniper berries (Juniperus communis). From its earliest origins in the Middle Ages, gin has evolved over the course of a millennium from a herbal medicine to an object of commerce in the spirits industry. Gin was developed on the basis of the older Jenever, and became widely popular in Great Britain when William of Orange, leader of the Dutch Republic, occupied the British throne with his wife Mary. Today, the gin category is one of the most popular and widely distributed range of spirits, and is represented by products of various origins, styles, and flavour profiles that all revolve around juniper as a common ingredient.[1][2] Etymology[edit] The name gin is derived from genièvre (French), jenever (Dutch), and ginepro (Italian), all of which mean "juniper".

National Jukebox LOC.gov WARNING: Historical recordings may contain offensive language. Read the disclaimer Now Playing... Elk's reunion march Le parlate d'amor El teléfono a larga distancia At the jazz band ball Everybody's jazzin' it Pack up your troubles in your old kit bag and smile, smile, smile! View This Playlist Documenting the American South: Open DocSouth What is DocSouth Data? Doc South Data provides access to some of the Documenting The American South collections in formats that work well with common text mining and data analysis tools. Documenting the American South is one of the longest running digital publishing initiatives at the University of North Carolina. It was designed to give researchers digital access to some of the library’s unique collections in the form of high quality page scans as well as structured, corrected and machine readable text. Doc South Data is an extension of this original goal and has been designed for researchers who want to use emerging technology to look for patterns across entire texts or compare patterns found in multiple texts.

Parable of the Polygons - a playable post on the shape of society This is a story of how harmless choices can make a harmful world. These little cuties are 50% Triangles, 50% Squares, and 100% slightly shapist. But only slightly! In fact, every polygon prefers being in a diverse crowd: You can only move them if they're unhappy with their immediate neighborhood. Once they're OK where they are, you can't move them until they're unhappy with their neighbors again. Types Of Drinking Glasses: Behind The Glassware For Wines, Beers And Liquors Do you ever wonder why we're supposed to drink wine from wine glasses, beer from beer glasses or brandy from brandy glasses? Well there's a reason and it's not as simple as you think. First, know this: It's not just meant to make you look fancy. These glasses are all specifically designed to maximize each drink's aroma and flavor in different ways. Even the pint glass you drink your beer out of is designed a certain way. And wine glasses, well, nowadays there's practically a glass for every variety, but you don't need more than a few to get by.

Scholarly Research Database A popular resource found in many academic settings worldwide, this resource was designed for the premier researcher, rich with the most valuable, comprehensive multidisciplinary content available. As a leading scholarly database, it provides access to acclaimed full-text journals, magazines, and other valuable resources. Superb Title Coverage to Support the Academic Curriculum Academic Search Premier covers the expansive academic disciplines now being offered in colleges and universities.

Searchable repository of monographs, journals, imprints from 1840- 1900. by nda_librarian Apr 30

"Making of America (MOA) is a digital library of primary sources in American social history primarily from the antebellum period through reconstruction. The collection is particularly strong in the subject areas of education, psychology, American history, sociology, religion, and science and technology. The book collection currently contains approximately 10,000 books with 19th century imprints." by feillet Feb 20

Making of America (MOA) represents a major collaborative endeavor to preserve and make accessible through digital technology a significant body of primary sources related to development of the U.S. infrastructure. With funding from the Andrew W. Mellon Foundation, MOA seeks to involve research institutions and national consortia to develop common protocols and consensus for the selection, conversion, storage, retrieval, and use of digitized materials on a large, distributed scale. by feillet Oct 12