The White Man in That Photo. Sometimes photographs deceive. 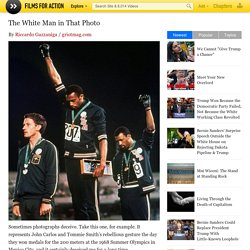 Take this one, for example. It represents John Carlos and Tommie Smith’s rebellious gesture the day they won medals for the 200 meters at the 1968 Summer Olympics in Mexico City, and it certainly deceived me for a long time. I always saw the photo as a powerful image of two barefoot black men, with their heads bowed, their black-gloved fists in the air while the US National Anthem, “The Star-Spangled Banner,” played. It was a strong symbolic gesture – taking a stand for African American civil rights in a year of tragedies that included the death of Martin Luther King and Bobby Kennedy.

It’s a historic photo of two men of color. Thanks to an old article by Gianni Mura, today I discovered the truth: that white man in the photo is, perhaps, the third hero of that night in 1968. It seemed as if the victory would be decided between the two Americans. Yet that race will never be as memorable as what followed at the award ceremony. “Peter was a lone soldier. Barbara Johns of Farmville, Virginia. Harriet Beecher Stowe — Uncle Tom's Cabin. Kim Wells, Domestic Goddesses Eliza is forced to flee dogs and slave-catchers in Uncle Tom's Cabin. 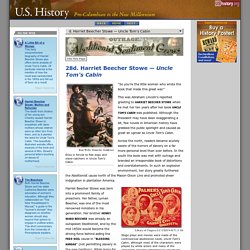 "So you're the little woman who wrote the book that made this great war. " This was Abraham Lincoln's reported greeting to Harriet Beecher Stowe when he met her ten years after her book Uncle Tom's Cabin was published. Although the President may have been exaggerating a bit, few novels in American history have grabbed the public spotlight and caused as great an uproar as Uncle Tom's Cabin. Across the north, readers became acutely aware of the horrors of slavery on a far more personal level than ever before. Library of Congress LC-USZC4-6171 (3-10) Stage plays and movies were made of the controversial abolitionist novel, Uncle Tom's Cabin, although most of the characters were played by white actors and many of the characters became stereotypical caricatures.

Harriet Beecher Stowe was born into a prominent family of preachers. Encouraged by her sister-in-law, Stowe decided to pen a novel. When 'Uncle Tom' Became an Insult. Malcolm X: Make It Plain. A foster child and street hustler who went on to become a world leader, Malcolm X electrified some audiences and terrified others with his aggressive brand of Islamic teachings and black nationalism. 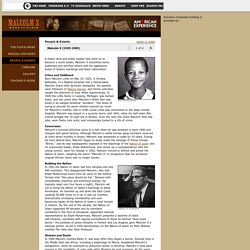 Crime and Childhood Born Malcolm Little on May 19, 1925, in Omaha, Nebraska, to a Baptist preacher and a homemaker, Malcolm knew little domestic tranquility. His parents were followers of Marcus Garvey, and family activities caught the attention of local white supremacists. In 1929 the Little home in Lansing, Michigan, was burned down, and two years later Malcolm's father Earl was killed in an alleged streetcar "accident. " The strain of trying to provide for seven children proved too much for Malcolm's mother, and in 1938 Louise Little was committed to the state mental hospital. Malcolm was placed in a juvenile home until 1941, when his half-sister Ella Collins brought the 15-year-old to Boston. Building the Nation In 1952 the Nation of Islam had four temples and only 400 members. American History: Civil Rights Movement: In the '60s, a Struggle for Equality in US (VOA Special English 2007-04-18) 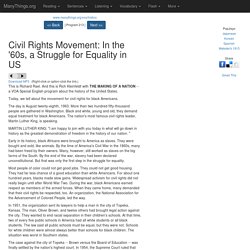 This is Richard Rael. And this is Rich Kleinfeldt with THE MAKING OF A NATION -- a VOA Special English program about the history of the United States. Today, we tell about the movement for civil rights for black Americans. The day is August twenty-eighth, 1963. MARTIN LUTHER KING: "I am happy to join with you today in what will go down in history as the greatest demonstration of freedom in the history of our nation Early in its history, black Africans were brought to America as slaves.

Most people of color could not get good jobs. In 1951, the organization sent its lawyers to help a man in the city of Topeka, Kansas.