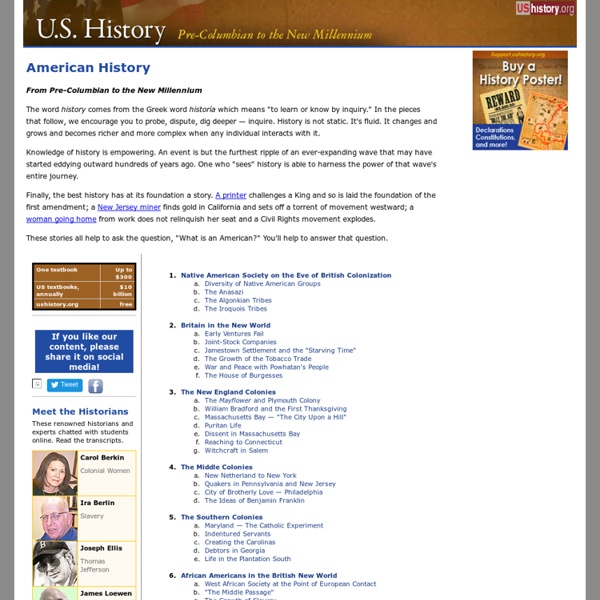 Gettysburg Animated Map « Back to Maps | More on Gettysburg » « View All Animated Maps | More Animated Maps: JavaScript and Adobe Flash 9 are required to view the CWPT Animated Maps. Watch our animated map of the Battle of Gettysburg, produced by Wide Awake Films. Learn more about this important Civil War battle in Pennsylvania. American Revolution: Early Colonial Era 1000 A.D. -Leif Ericson, a Viking seaman, explores the east coast of North America and sights Newfoundland, establishing a short-lived settlement there. 1215 - The Magna Carta document is adopted in England, guaranteeing liberties to the English people, and proclaiming basic rights and procedures which later become the foundation stone of modern democracy. 1492 - Christopher Columbus makes the first of four voyages to the New World, funded by the Spanish Crown, seeking a western sea route to Asia. On October 12, sailing the Santa Maria, he lands in the Bahamas, thinking it is an outlying Japanese island. 1497 - John Cabot of England explores the Atlantic coast of Canada, claiming the area for the English King, Henry VII.

Teaching With Documents Skip Navigation. Teachers Home > Teachers' Resources > Teaching With Documents American Slave Narratives From 1936 to 1938, over 2,300 former slaves from across the American South were interviewed by writers and journalists under the aegis of the Works Progress Administration. These former slaves, most born in the last years of the slave regime or during the Civil War, provided first-hand accounts of their experiences on plantations, in cities, and on small farms. Their narratives remain a peerless resource for understanding the lives of America's four million slaves. What makes the WPA narratives so rich is that they capture the very voices of American slavery, revealing the texture of life as it was experienced and remembered.

How All 50 States Got Their Names Alabama Before Europeans landed on American shores, the upper stretches of the Alabama River in present-day Alabama used to be the home lands of a Native American tribe called – drum roll, please – the Alabama (Albaamaha in their own tribal language). The river and the state both take their names from the tribe, that's clear enough, but the meaning of the name was another matter. Texas State Historical Association (TSHA) The new Texas Almanac 2014-2015 is here! Known as "the source of all things Texan," the Texas Almanac is the go-to guide for all subjects relating to Texas industries, commerce, history, government, sports, and other vital aspects of the Lone Star State. And it can be yours when you order your copy today! Packed with articles, hundreds of full-color photographs, maps, and data, the 752-page Texas Almanac is heralded as the premier reference guide for everything Texan.

Forty Remarkable Native American Portraits by Frank A. Rinehart from 1899. - Flashbak Flashbak Frank Albert Rinehart was born in Lodi, Illinois in 1861. At some point in the 1870s he and his brother moved to Colorado and started working at a photography studio in Denver. When he was about twenty, Frank and his brother formed a partnership with the famous Western photographer William Henry Jackson. It was under Jackson that Rinehart perfected his, not inconsiderable professional photography skills. However Frank also became particularly interested in Native American culture. In 1898 Rinehart was commissioned to photograph the Indian Congress, which was held in conjunction with the Trans-Missisippi and International Exposition, and the Native American personalities who were attending it.

History on Trial The Pocahontas Archive Did she, or didn't she? Save John Smith, that is. A People's History of the United States Summary Throughout A People's History of the United States, Howard Zinn blends critical approaches. The book's twenty-five chapters move from the European discovery of North America through the year 2000, evoking American history in a roughly chronological sequence. However, each chapter also has a topical focus, which allows Zinn to trace distinct but intersecting lines of historical influence. Zinn uses these intersections of time and topic as a combination of springboard and platform: he inserts extended meditations on key themes where they grow logically from the narrative of the people's history.

nam.html Middle Mississippian Paleogeography of North America Images that track the ancient landscapes of North America Introduction The images presented here show the paleogeography of North America over the last 550 million years of geologic history. Guide to the Constitution We the People of the United States, in Order to form a more perfect Union, establish Justice, insure domestic Tranquility, provide for the common defense, promote the general Welfare, and secure the Blessings of Liberty to ourselves and our Posterity, do ordain and establish this Constitution for the United States of America. Article I: Legislative Essays » Section 1 All legislative Powers herein granted shall be vested in a Congress of the United States, which shall consist of a Senate and House of Representatives.