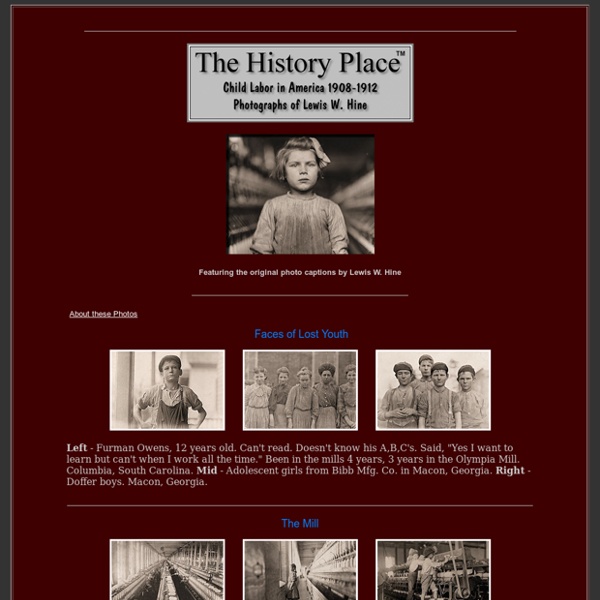 Holocaust Global rating average: 0.0 out of 50.00.00.00.00.0 These sites are about the Holocaust and the devastating impact that it had on Jewish people and others. Also includes information about Adolf Hitler, concentration camps, crematoriums, and resistance fighters. There are videos of survivors talking about their experiences, plus many photos. Includes links to eThemes Resources on World War II and “The Diary of Anne Frank.” Grades Links The Price of Freedom: Americans at War This site provides chapters of America's Involvement in WWII from Axis Aggression to Victory and Peace. Education Standards Request State Standards

Child labor in Factories During the Industrial Revolution 1. "The Industrial Revolution, 1700-1900." DISCovering World History. 1997Student Resource Center. Framington Hills, Mich.: Gale Group. Online Database. November 8, 2001 2. 3. This is a primary source because it is a collection of actual interviews from the time period. 5. 6. 7. The Mysterious Plain of Jars Often referred to as â€œan Asian version of Stonehengeâ€, the Plain of Jars is one of the most enigmatic sights on Earth. Shrouded in mystery and myth, this ancient place has fascinated archeologists and scientists ever since its discovery. [Photo Credits] Thousands of giant stone jars scattered around the Xieng Khouang plain, in Laos form one of the most bizarre archeological collections in history. Although it has been determined they are over 2000 years old, no one has yet been able to determine who built them and for what purpose. Made of sedimentary rock, like sandstone or granite, and calcified coral, the jars weigh up to 13 tons and are between 1 and 3 meters high. [Photo Credits] More than 400 sites have been discovered around the Plain of Jars, but only three of them have been opened to the public. [Photo Credits] But if you ask the locals, theyâ€™ll tell you of an old race of giants who once lived in these lands.

Robot Bear Rampage Felt like drawing with a dry erase marker today. Here is a gigantic robot bear rampaging through a city. "Robot Bear Rampage" - dry erase marker on paper - 18" x 13" All work © Lawrence Yang 2009 my blog | my site | purchase inquries 20 Death Masks Of Famous People Death Masks are easily the most haunting mementos of the deceased. They have been in existence since the time of Tutankhamun, whose solid gold burial mask is an object of extreme beauty and superstition. Here, we present twenty casts that have preserved some of the most famous faces to have graced this planet. Napoleon Bonaparte, Emperor of the French. Post-Mortem casts of face and hands by famed sculptor Sergey Merkurov. Reputedly taken after post mortem by Josef Dannhauser. Taken at the time of his autopsy and currently on display at the National Museum of Health and Medicine, Washington DC. The master of suspense in all his eeriness. Original cast by John Michael Rysbrack. Influential enlightenment philosopher. The original death mask and will of the founder of Nobel prize is displayed at his residence in Karlskoga, Sweden A Romantic great, Keats lived his last days in Rome and his death mask is currently on display at his house in Piazza di Spagna. Maximilien Robespierre Rate :

Ancient Underwater City Found Off India: Discovery in Bay of Cam Now, it was announced in January, a civilization has been uncovered that would have appeared just as ancient to the people who built the pyramids as the pyramids seem to us. According to marine scientists in India, archaeological remains of this lost city have been discovered 36 metres (120 feet) underwater in the Gulf of Cambay off the western coast of India. And carbon dating says that they are 9,500 years old. This news completely contradicts the position of most Western historians and archaeologists, who (because it did not fit their theories) have always rejected, ignored, or suppressed evidence of an older view of mankind's existence on planet Earth. Human civilization is now provably much more ancient than many have believed. According to the BBC's Tom Housden, reporting on the Cambay find: Several reports confirm this estimate. Unheard-of Scope of Cambay Ruins The BBC article tells us that the remains of this ancient city stand upon "enormous foundations." According to Howe:

Conspiracy | Documentary Heaven :: Food For Your Brain | Free On (Banned Discovery Channel Documentary) "Conspiracy of Silence" is a powerful, disturbing documentary revealing a nationwide child abuse and pedophilia ring that leads to the highest levels of government. Featuring intrepid investigator John DeCamp, a highly decorated Vietnam war veteran and 16-year Nebraska state senator, "Conspiracy of Silence" reveals how rogue elements at all levels of government have been involved in systematic child abuse and pedophilia to feed the base desires of key... The grim future foretold in 1984 has become reality. The United States is now recognized globally as one of the most oppressive police states on earth. What In The World Are They Spraying? Meet The Truth 2 Year Anniversary Show. The documentary, first broadcast on HBO throughout November & December 2006, exposes the dangers of voting machines used during America's mid term and presidential elections. Broadcast 14 November 2006. What is Your Line In The Sand?

Scientist Creates Cold Fusion For the First Time In Decades | Gi Cold fusion, the act of producing a nuclear reaction at room temperature, has long been relegated to science fiction after researchers were unable to recreate the experiment that first “discovered” the phenomenon. But a Japanese scientist was supposedly able to start a cold fusion reaction earlier this week, which—if the results are real—could revolutionise the way we gather energy. Yoshiaki Arata, a highly respected physicist in Japan, demonstrated a low-energy nuclear reaction at Osaka University on Thursday. In front of a live audience, including reporters from six major newspapers and two tv studios, Arata and a co-professor Yue-Chang Zhang, produced excess heat and helium atoms from deuterium gas. Arata used pressure to force deuterium gas into an evacuated cell that contained a palladium and zirconium oxide mix(ZrO2-Pd). Arata said that the mix caused the deuterium’s nuclei to fuse, raising the temperature in the cell and keeping the centre of the cell warm for 50 hours.