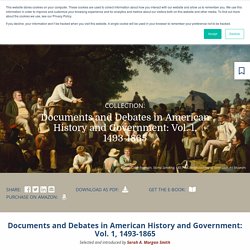 Resources for Teaching Social Studies – Classroom Aid. Top free resources for teaching and learning Social Studies The Library of Congress – Resources in “for teachers” page include ready-to-use materials that brings the Library’s primary sources aligned with state standards into the classrooms, online modules to build teacher skills with the Library’s professional development curriculum (Library of Congress Learning Page “The Learning Page is designed to help educators use the American Memory Collections to teach history and culture. 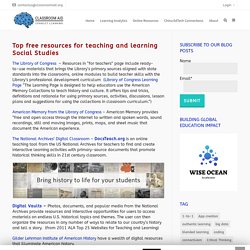 It offers tips and tricks, definitions and rationale for using primary sources, activities, discussions, lesson plans and suggestions for using the collections in classroom curriculum.”) American Memory from the Library of Congress – American Memory provides “free and open access through the Internet to written and spoken words, sound recordings, still and moving images, prints, maps, and sheet music that document the American experience.

The World Digital Library (WDL) whilst in Qatar. Bookmarks. Summary Objective 13. About the Interactive Constitution. From the main menu, use the “Articles” and “Amendments” tabs on the upper right hand side of the screen to select the part of the Constitution you would like to see. 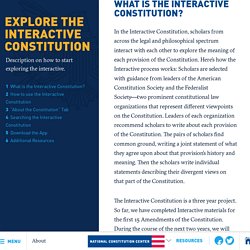 The “Articles” tab will take you to a page that lists each article of the Constitution. Click on any article in order to view Interactive materials related to that article. Likewise, click on the “Amendments” tab to see a list of all the amendments, and click on any amendment to see Interactive materials related to that amendment. Democracy in Early America: Servitude and the Treatment of Native Americans and Africans prior to 1740. Essential Questions. 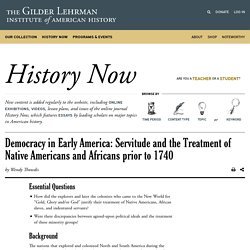 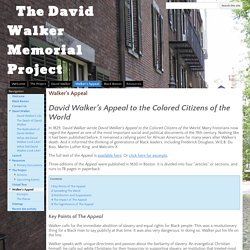 Many historians now regard the Appeal as one of the most important social and political documents of the 19th century. Nothing like it had been published before. It remained a rallying point for African Americans for many years after Walker’s death. And it informed the thinking of generations of Black leaders, including Frederick Douglass, W.E.B. Du Bois, Martin Luther King, and Malcolm X. 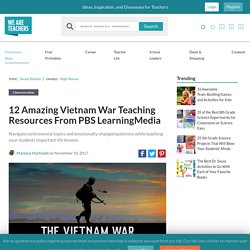 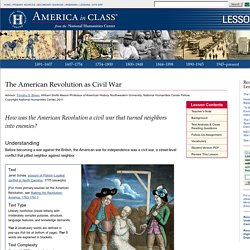 Breen, William Smith Mason Professor of American History, Northwestern University , National Humanities Center Fellow.Copyright National Humanities Center, 2011 How was the American Revolution a civil war that turned neighbors into enemies? Understanding Before becoming a war against the British, the American war for independence was a civil war, a street-level conflict that pitted neighbor against neighbor. Tarring and Feathering, 1774.

Text Janet Schaw, account of Patriot–Loyalist conflict in North Carolina, 1775 (excerpts). Internationalizing Student Learning Outcomes in History: A Report to the American Council on Education. The task force presented its final report in September 2005 to a national gathering of higher education administrators in Washington, DC. 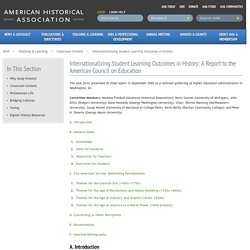 Stearns (George Mason University). A. Introduction B. C. The Authentic History Center. Presidential podcast by The Washington Post. Appraising the Electoral College - Bill of Rights Institute. Every four years Americans head to the polls to select the presidential candidate they like best. 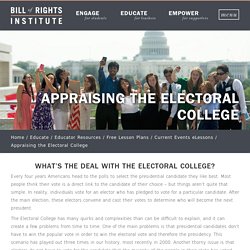 Most people think their vote is a direct link to the candidate of their choice – but things aren’t quite that simple. In reality, individuals vote for an elector who has pledged to vote for a particular candidate. After the main election, these electors convene and cast their votes to determine who will become the next president. The Electoral College has many quirks and complexities than can be difficult to explain, and it can create a few problems from time to time. SAT US History Study Guide. School & Teachers : Teacher Resources. Zinn Education Project. The Contested History of American Freedom. No idea is more fundamental to Americans' sense of ourselves as individuals and as a nation than freedom. 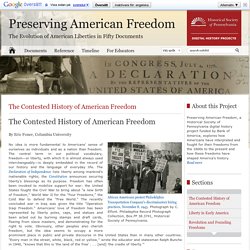 The central term in our political vocabulary, freedom—or liberty, with which it is almost always used interchangeably—is deeply embedded in the record of our history and the language of everyday life. The Declaration of Independence lists liberty among mankind's inalienable rights; the Constitution announces securing liberty's blessings as its purpose. Freedom has often been invoked to mobilize support for war: the United States fought the Civil War to bring about "a new birth of freedom," World War II for the "Four Freedoms," the Cold War to defend the "Free World. " The recently concluded war in Iraq was given the title "Operation Iraqi Freedom. " Americans' love of freedom has been represented by liberty poles, caps, and statues and been acted out by burning stamps and draft cards, fleeing from slave masters, and demonstrating for the right to vote.

50 Core Documents. Memory and Memorialization. Primary Sources » America in Class. Teaching History With Film: 'Lincoln', 'Argo' and 'Zero Dark Thirty' DreamWorks Pictures and 20th Century FoxDaniel Day-Lewis in Steven Spielberg’s film “Lincoln.” Three of this year’s Oscar contenders — “Lincoln,” “Argo” and “Zero Dark Thirty” — invite viewers to look at history, either through the lens of the distant past (as in the case of “Lincoln”) or through recent events (like “Zero Dark Thirty”), and to question the degree of truth and fiction at work in the retelling of these events.

These same three movies have also prompted some serious debate and reflection on American politics, and the direction the nation should be headed. Below, we offer ways you can approach each film in the classroom, with critical thinking questions and related Times resources. While they are intended as jumping-off points for further discussion and reflection, you can also have students address these themes by writing their own movie reviews or scene analyses. Ways to Approach: The Best of the Humanities on the Web. Toolbox Library: Primary Resources in U.S. History and Literature. A More Perfect Union. One of the most revolutionary aspects of the Constitution is “federalism,” the innovative system which created a strong national government while at the same time preserving much of the independence of the states.

This delicate balance of power, seemingly hard-wired for disagreement and conflict, has served America well for more than two centuries. But it has also led to tensions throughout American history and still sparks controversy today. Peter Sagal travels across the country and meets many who believe that the federal government has grown too big, and assumed more power than the framers intended. He’ll talk to a Montana gun rights advocate, who believes federal firearms regulations are taking away his constitutional rights, and to the owner of a medical marijuana dispensary in Oakland which is legal according to the state of California, but for which he could be subject to the death penalty according to federal law.

If scalding drops from Rage from Anguish Wrung If speechless Sorrows lab' ring for a Tongue, Or if a weeping World can ought appease The plaintive Ghosts of Victims such as these; The Patriot's copious Tears for each are shed, A glorious Tribute which embalms the Dead. But know, FATE summons to that awful Goal, Where JUSTICE strips the Murd'rer of his Soul: Should venal C-ts the scandal of the Land, Snatch the relentless Villain from her Hand, Keen Execrations on this Plate inscrib'd, Shall reach a JUDGE who never can be brib'd.