Johns Hopkins Magazine - April 1995 Issue. By Elise Hancock The problem of filth In the nicest parts of New York City, 100 years ago, the March thaw would reveal streets knee-high in mud, manure, trash, and long-dead animals. 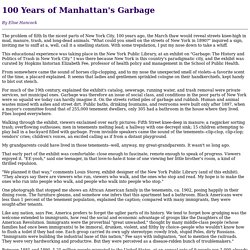 "What could you smell on the streets of New York in 1890? " inquired a sign, inviting me to sniff at a, well, call it a smelling station. With some trepidation, I put my nose down to take a whiff.

The women of New York; or, The under-world of t... New and second hand banner list : side show and... World's fairs from London 1851 to Chicago 1893 .. Stunning photos of stars Humphrey Bogart, Audrey Hepburn, Clark Gable, Grace Kelly and more on vacation. By Jessica Jerreat Published: 15:37 GMT, 18 August 2013 | Updated: 07:04 GMT, 19 August 2013 Their movies provided an escape from the humdrum reality of daily life for their fans, but this stunning collection of images shows how some of the biggest screen idols escaped their busy schedules. 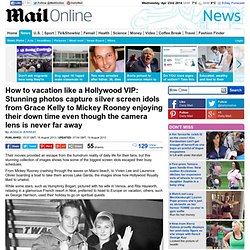 From Mickey Rooney crashing through the waves on Miami beach, to Vivien Lee and Laurence Olivier boarding a boat to take them across Lake Garda, the images show how Hollywood Royalty liked to unwind. Meet Jane, the 14-year-old eaten when the first British settlers in America turned to cannibalism: The macabre secrets of starving pioneers besieged by Red Indians. U.S.S. Akron crash: 80th anniversary of disaster that killed 73... TWICE as many people as the Hindenburg. By Daily Mail Reporter and Associated Press Published: 06:22 GMT, 1 April 2013 | Updated: 08:39 GMT, 1 April 2013 Four years before the Hindenburg disaster killed 36 people, another giant airship crashed claimed twice as many lives. 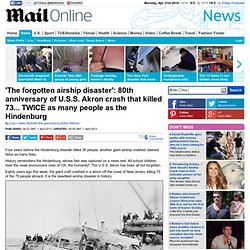 History remembers the Hindenburg, whose fate was captured on a news reel. All school children hear the news announcers cries of 'Oh, the humanity! ' The U.S.S. Stranded at the drive-in: LIFE magazine turns the camera on the audience in classic shots of fans at the movies. Images show couples, families and even cowboys watching filmsRows of cars line up by speakers and snacks are brought to their windows By Emma Reynolds Published: 09:50 GMT, 14 January 2013 | Updated: 13:36 GMT, 14 January 2013 The drive-in movie theatre is an archetypal symbol of old-fashioned America. 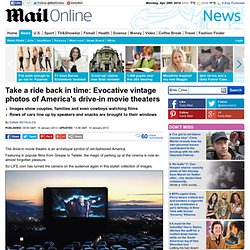 Featuring in popular films from Grease to Twister, the magic of parking up at the cinema is now an almost forgotten pleasure. So LIFE.com has turned the camera on the audience again in this stylish collection of images. This is our church: Charlton Heston appears on screen as Moses in The Ten Commandments, flinging out his arms while the cars below almost look like 'a rapt congregation at prayer' Dolly Sisters: Jenny and Rosie the 1920s cabaret darlings on Broadway who ruined Harry Selfridge. Janzieska and Roszieska Deutsch born in Budapest, Hungary, in 1892Emigrated to America and became Jenny and Rosie, the Dolly SistersTheir stunning beauty helped them dance from vaudeville to BroadwayHarry Selfridge, founder of Selfridges, proposed to Jenny every monthJenny committed suicide in 1941 after near-fatal car crashRosie attempted suicide but died of heart failure in 1970 By Martha De Lacey Published: 11:38 GMT, 31 October 2012 | Updated: 11:47 GMT, 31 October 2012 They were the celebrity darlings of the 1920s on both sides of the Atlantic. 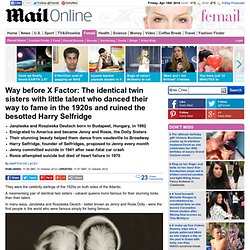 A mesmerising pair of identical twin sisters - cabaret queens more famous for their stunning looks than their talent. In many ways, Janzieska and Roszieska Deutch - better known as Jenny and Rosie Dolly - were the first people in the world who were famous simply for being famous. They perfected a single-sex 'tandem' dance act under the name 'The Dolly Sisters' and were making money performing it in beer halls as early as 1907. USAR dogs. Stunning pageant photographs show the first ever Miss Americas and bathing beauties from the 1920s. By Daily Mail Reporter Published: 15:45 GMT, 9 September 2012 | Updated: 12:23 GMT, 26 September 2012 Stunning photographs taken of beauty pageants a century ago show that nothing has changed yet everything is different. 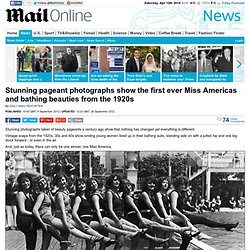 Vintage snaps from the 1920s, 30s and 40s show smiling young women lined up in their bathing suits, standing side on with a jutted hip and one leg stuck forward - or even in the air. Stunning images from turn-of-the-century New York show the last vestiges of stone buildings and low-slung skyline. By Beth Stebner Published: 05:46 GMT, 18 July 2012 | Updated: 21:58 GMT, 18 July 2012 At the turn of the century, New York City was every bit a bustling metropolis, but one based on Old World Tradition. But with commerce booming from the recent Industrial Revolution, the city was finding ways to reinvent itself. Adding fuel to the fire was the recent installation of the subway in 1904, the invention of the elevator, and the technology to build skyscrapers, such as the iconic Flatiron. Pictured: The freed slave behind moving letter to old master after he was asked back to work on farm.

By Associated Press Published: 18:40 GMT, 16 July 2012 | Updated: 13:09 GMT, 17 July 2012 The photograph, scratched and undated, is captioned 'Brother Jordan Anderson'. He is a middle-aged black man with a long beard and a righteous stare, as if he were a preacher locking eyes with a sinner, or a judge about to dispatch a thief to the gallows. Anderson was a former slave who was freed from a Tennessee plantation by Union troops in 1864 and spent his remaining 40 years in Ohio. He lived quietly and probably would have been forgotten, if not for a remarkable letter to his former master published in a Cincinnati newspaper shortly after the Civil War. Scathing: Former slave Jordan Anderson (left) wrote a satirical letter in 1865 to his old master after he was asked to return to work for him.

Treasured as a social document, praised as a masterpiece of satire, Anderson’s letter has been anthologized and published all over the world. Addressed to one Col. Enlarge Roy E. 'Harvest is coming on. The Daughter Of Dawn: Footage restored of 1920 silent film with all-Indian cast. Film has not been seen since it was screened more than 90 years ago By Kerry Mcqueeney Published: 12:01 GMT, 16 July 2012 | Updated: 12:11 GMT, 16 July 2012 Extraordinary footage from a 1920 silent film which historians feared had been lost forever has been brought back to life. Carnival sideshow freaks from 19th century New York. By Daily Mail Reporter Published: 03:02 GMT, 28 June 2012 | Updated: 04:32 GMT, 28 June 2012 Freaky but fascinating these vintage photographs reveal circus sideshow acts in all their glory. 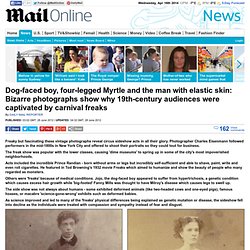 Photographer Charles Eisenmann followed performers in the mid-1800s in New York City and offered to shoot their portraits so they could tout for business. The freak show was popular with the lower classes, causing 'dime museums' to spring up in some of the city's most impoverished neighborhoods. Acts included the incredible Prince Randian - born without arms or legs but incredibly self-sufficient and able to shave, paint, write and even roll cigarettes. Others were 'freaks' because of medical conditions. The side show was not always about humans - some exhibited deformed animals (like two-headed cows and one-eyed pigs), famous hoaxes, or macabre 'science-gone-wrong' exhibits such as deformed babies.

Children in agriculture : McGill, Nettie Pauline. Early American Crime › An exploration of crime, criminals, and punishments from America’s past.