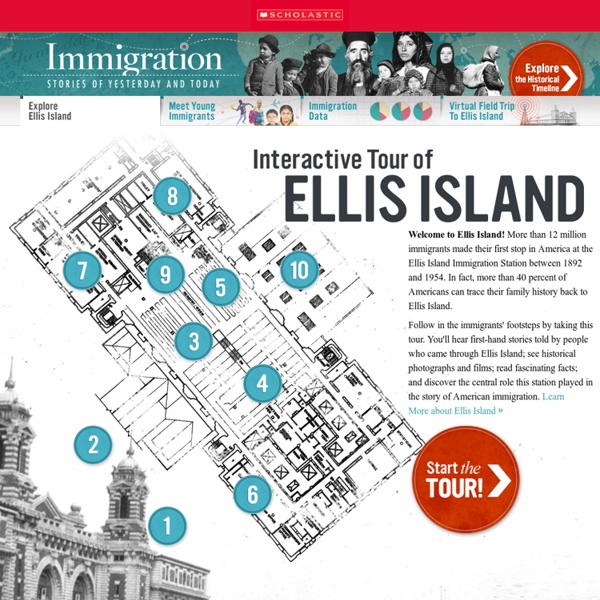 Habitudes : used to / would-anglais Apprendre l'anglais > Cours & exercices d'anglais > Exercices d'anglais > test d'anglais n°26509 : Habitudes : used to / would Hello there ! Habitudes du passé : Used to ou Would ? 35 Ellis Island Immigration Photos That Capture American Diversity We and our advertising partners process your personal data using technology such as cookies in order to serve advertising, analyse our traffic and deliver customised experiences for you. You have choice in who uses your data and for what purposes. You can set your consent preferences and determine how you want your data to be used based on the purposes below. Each purpose has a description so that you know how we and our partners use your data.

Virtual Exhibits - Hoboken Historical Museum While there is no substitute for visiting the Museum and experiencing our exhibits in person, our virtual exhibits allow people who aren’t able to make it to the Museum to still benefit from our exhibits, and they also serve as big snapshots of our changing exhibits. You can take a virtual tour of the museum on Google Maps in a 360-degree view of our “Mapping the Territory” exhibit (2013). Our Google Map entry features high-quality photography and interactive navigation: Hoboken Historical Museum on Google Maps. In addition, we have Gigapans – wide-angle, high-resolution photographs – of many of our exhibits, past and present. Click on the links below to view them. The Anne Frank House in virtual reality The furnished Secret Annex In the VR app, all of the rooms in the secret annex are furnished according to how it was when occupied by the group in hiding, between 1942 and 1944. Everything was carefully built and modelled in 3D by Force Field Entertainment, the creators of the app. Empty Secret Annex In the actual museum, the secret annex is empty.

The Second World War with Jacqueline Wilson - Puffin Schools Puffin is an imprint of Penguin Random House, the world’s number-one publisher representing a vibrant community of publishing houses marked by unparalleled success. Through our world of stories, Puffin aims to open up the world to every child. Our mission is to inspire children to feel they can be and do anything, and to create readers for life. Puffin started out as a non-fiction publisher, with its first title appearing in 1940. As the most iconic and well-known children’s book brand in the UK today, we are always on the lookout for innovative ways to tell the world’s favourite stories and for brilliant new debut talent and brands that connect with today’s young readers, from newborn up to twelve years old. We publish a diverse and wide range of fiction, non-fiction, picture books and children’s classics.

Ellis Island - Facts & Summary 1630-1770 Ellis Island is little more than a spit of sand in the Hudson River, located just south of Manhattan. The Mohegan Indians who lived on the nearby shores call the island Kioshk, or Gull Island. In the 1630s, a Dutch man, Michael Paauw, acquires the island and renames it Oyster Island for the plentiful amounts of shellfish on its beaches. During the 1700s, it is known as Gibbet Island, for its gibbet, or gallows tree, used to hang men convicted of piracy. 1775-1865 Around the time of the Revolutionary War, the New York merchant Samuel Ellis purchases the island, and builds a tavern on it that caters to local fisherman. Cape May County, NJ - Official Website Day 4- Jilly the Cow Key Terms: Herbivore- an animal that specializes in eating plant matter Incisor- a narrow-edged tooth at the front of the mouth, adapted for cutting. Molars- a grinding tooth at the back of a mammal's mouth. Grazer- a grazer is an herbivore that feeds on plants such as grass and other low-lying vegetation. Ruminant- an animal that has a large four chambered stomach called a Rumen.

12 Banksy Murals You Can See on Street View — Google Arts & Culture Tag along with us on a virtual street art tour The mysterious graffiti artist Banksy has been creating his satirical stencil-style work on buildings and walls around the world for almost 30 years. A large number of these have been destroyed, physically removed, or painted over by other artists — as is the ephemeral nature of street art. However there are still some around that you can explore using Street View.

5 facts about illegal immigration in the U.S. For the first time, the number of unauthorized immigrants living in the U.S. was lower in 2015 than it was at the end of the Great Recession in 2009. The origin countries of unauthorized immigrants also shifted during that time, with the number from Mexico declining and the number from other regions rising, according to the latest Pew Research Center estimates. Here are five facts about the unauthorized immigrant population in the U.S. The Entire Battleship New Jersey Tour Can Now Be Taken From Your Couch Battleship New Jersey is a can’t-miss Garden State attraction that absolutely needs to be seen in person. It’s such an incredible piece of history! However, that’s not possible right now, so we’ve found the next best thing – a comprehensive virtual tour. At around 30 minutes long, you’ll learn so much about the ship, and you may even feel like you’re actually there. It’s definitely something worth watching as a family and can even make for a fun little date from home.

Biden battles crisis over surge in children crossing Mexican border The top US immigration official said authorities were expelling the majority of migrants crossing the southern border, as the Biden administration battled a growing political crisis over the surging number of children entering the US. “The message is quite clear, do not come,” Alejandro Mayorkas told ABC. “The border is closed. The border is secure. We are expelling families. Why do so many Mexican immigrants come to the United States? By Daniela Grava, Medill, Immigrant Connect After being deported for being an undocumented Mexican immigrant, Elvira Arellano has returned and is seeking asylum in Chicago for herself and her US-born son. Why did she come to the United States in the first place, and then return after being turned away? Like many other Mexican immigrants, not necessarily for the American dream. The “American dream” is an ethos steeped in American lore that became popularized in the 1930s.