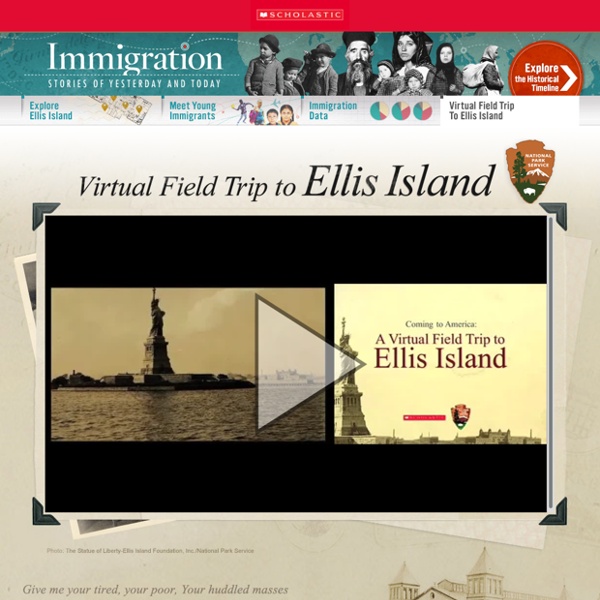 Ellis Island Interactive Tour With Facts, Pictures, Video World War II and the Postwar Period The United States entered World War II in 1942. During the war, immigration decreased. There was fighting in Europe, transportation was interrupted, and the American consulates weren't open. Fewer than 10 percent of the immigration quotas from Europe were used from 1942 to 1945.In many ways, the country was still fearful of the influence of foreign-born people. Great Wall of China Travel Guide & Tours As China's most famous attraction, the Great Wall of China is an essential stop on all China tours. Commonly considered a wonder of the world, the Great Wall boasts a history of over 2,000 years and stretches more than 3,000 miles across several provinces of northern China, making it one of the most impressive ancient structures on the planet. Virtual Tour of the Great Wall of China

Audio Books & Poetry : Free Audio : Download & Streaming LibriVox recording of 12 CREEPY TALES BY EDGAR ALLAN POE(1809 - 1849) This is a collection of 12 creepy stories by that master of creepiness, Poe. The Black Cat; The Fall of the House of Usher, The Raven; The Tell Tale Heart, The Masque of the Red Death, the Premature Burial and six others that are a shuddering delight to read and listen to. Turn off the lights, settle down and hear these stories read to you as only LibriVox readers can perform them. (Summary by Phil Chenevert) For further... favoritefavoritefavoritefavorite ( 4 reviews ) Topics: librivox, audiobook, horror, poe, creepy Source: Librivox recording of a public-domain text

Predict Old Faithful - Teachers Grade Level: Upper Elementary: Third Grade through Fifth Grade Subject: Math,Science The 100 best novels written in English: the full list 1. The Pilgrim’s Progress by John Bunyan (1678) A story of a man in search of truth told with the simple clarity and beauty of Bunyan’s prose make this the ultimate English classic. 2. The First Thanksgiving: Virtual Field Trips, Videos, and Slideshow Mayflower: Step aboard and explore a reproduction of the Mayflower, anchored at Plimoth Plantation, in this 20-minute video for all grades. Pilgrim Village: Get a behind-the-scenes look at the simple but arduous life of the Pilgrims in this 18-minute video for all grades. Wampanoag Homesite: Witness the day-to-day life of the indigenous people who were part of the Wampanoag Nation in this 17-minute video for all grades. Plimoth Plantation: Join the Pilgrims and Wampanoag as they discuss the first Thanksgiving in this 30-minute video for grades 3 and higher. Tour the fields and homes of the Pilgrims and watch the Wampanoag at work in this slideshow tour of the Pilgrim Village and Wampanoag Homesite.

The Obsessively Detailed Map of American Literature's Most Epic Road Trips The above map is the result of a painstaking and admittedly quixotic effort to catalog the country as it has been described in the American road-tripping literature. It includes every place-name reference in 12 books about cross-country travel, from Mark Twain’s Roughing It (1872) to Cheryl Strayed’s Wild (2012), and maps the authors’ routes on top of one another. You can track an individual writer’s descriptions of the landscape as they traveled across it, or you can zoom in to see how different authors have written about the same place at different times. Most interestingly of all, for me at least, you can ruminate about what those differences say about American travel, American writing, American history.

Tour of the Moon 4K - Moon: NASA Science Image Credit: NASA's Scientific Visualization Studio Published: April 9, 2018 In the fall of 2011, the Lunar Reconnaissance Orbiter (LRO) mission released its original Tour of the Moon, a five-minute animation that takes the viewer on a virtual tour of our nearest neighbor in space.