Perspectives on Resistance: Malcolm X and Martin Luther King, Jr. DN! This is viewer supported news Donate Six black students at Jena High School in Central Louisiana were arrested last December after a school fight in which a white student was beaten and suffered a concussion and multiple bruises. 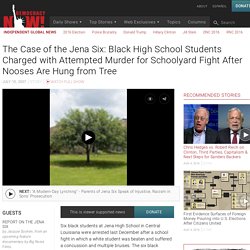 The six black students were charged with attempted murder and conspiracy. They face up to 100 years in prison without parole. The fight took place amid mounting racial tension after a black student sat under a tree in the schoolyard where only white students sat. Jena 6 Defense CommitteePO BOX 2798Jena, LA 71342 This is a rush transcript. AMY GOODMAN: Jena is a small town nestled deep in the heart of Central Louisiana. Last December, six black students at Jena High School were arrested after a school fight in which a white student was beaten and suffered a concussion and multiple bruises. The Jena Six, as they have come to be known, range in age from 15 to 17.

It was a question that many in power had been asking for some time. What was different this time was to whom the question was posed: the newly free black people themselves. It was a visit born of a massacre about a month before, and it launched a debate that continues to this day. The issue of where these people should go had dogged Maj. Gen. More than 10,000 black refugees followed Sherman’s March to the Sea. There was one corps, however, the refugees seemed to avoid: the 14th Corps, led by a brigadier general with a most unlikely name: Jefferson Davis. Davis blamed the 600 or so black refugees following his unit for slowing down his 14,000 men in the closing weeks of the march. Speed was vital. On the night of Dec. 8, the corps arrived at the western bank of Ebenezer Creek. (He didn’t. MUSC 204: Popular Music in Black America. Cara Shillenn, Sec. 0103 Musc205 Mixtape Project Rap and hip hop music from the past 2 decades reference slavery and emancipation to make people aware of current parallels in American society to the times of slavery. 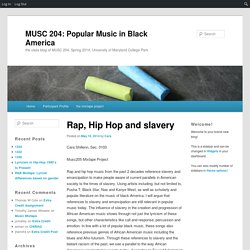 Using artists including, but not limited to, Pusha T, Black Star, Nas and Kanye West, as well as scholarly and popular literature on the music of black America, I will argue that references to slavery and emancipation are still relevant in popular music today. 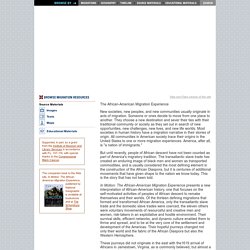 Someone or ones decide to move from one place to another. They choose a new destination and sever their ties with their traditional community or society as they set out in search of new opportunities, new challenges, new lives, and new life worlds. Most societies in human history have a migration narrative in their stories of origin. All communities in American society trace their origins in the United States to one or more migration experiences. But until recently, people of African descent have not been counted as part of America's migratory tradition. Black Lives Matter: Continuing the Civil Rights Movement. Teaching with the News Black Lives Matter rallies and demonstrations. 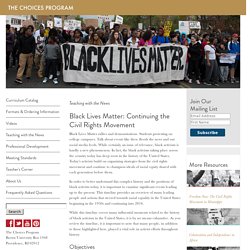 Students protesting on college campuses. Talk about events like these floods the news and our social media feeds. While certainly an issue of relevance, black activism is hardly a new phenomenon. In fact, the black activism taking place across the country today has deep roots in the history of the United States. In order to better understand this complex history and the positions of black activists today, it is important to examine significant events leading up to the present.

While this timeline covers many influential moments related to the history of black activism in the United States, it is by no means exhaustive. Objectives Students will: Resources Black Lives Matter: Continuing the Civil Rights Movement, an interactive timeline with videos and images. Overview - African American Identity in the Gilded Ag - Lesson Plan. Back to Lesson Plans Lesson Overview Examine the tension experienced by African-Americans as they struggled to establish a vibrant and meaningful identity based on the promises of liberty and equality in the midst of a society that was ambivalent towards them and sought to impose an inferior definition upon them. 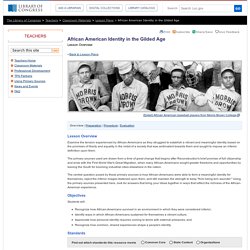 The primary sources used are drawn from a time of great change that begins after Reconstruction's brief promise of full citizenship and ends with the First World War's Great Migration, when many African-Americans sought greater freedoms and opportunities by leaving the South for booming industrial cities elsewhere in the nation. The central question posed by these primary sources is how African-Americans were able to form a meaningful identity for themselves, reject the inferior images fastened upon them, and still maintain the strength to keep "from being torn asunder.