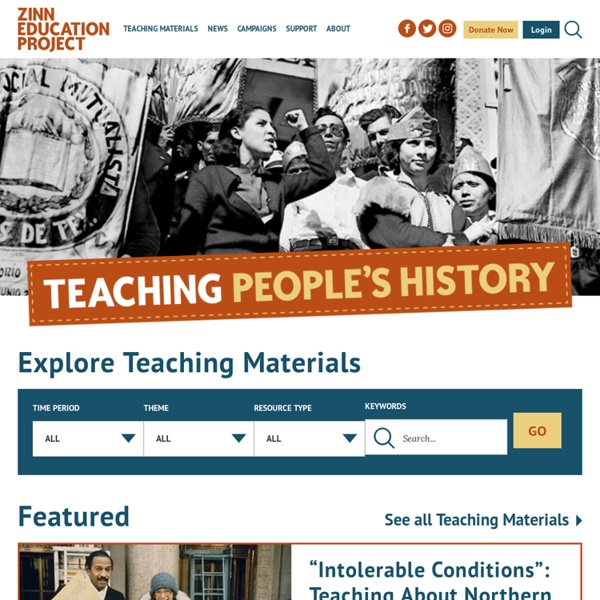 by Alison Kysia When I teach history related to Islam or Muslims in the United States, I begin by asking students what names they associate with these terms. The list is consistent year after year: Malcolm X, Elijah Muhammad, and Muhammad Ali. All of these individuals have affected U.S. history in significant ways. If we take a step back and look at the messages these figures communicate about Muslims in U.S. history, we see a story dominated by men and by the Nation of Islam. Although important, focusing solely on these stories leaves us with a skewed view of Muslims in U.S. history.

A People's History of the United States Summary Throughout A People's History of the United States, Howard Zinn blends critical approaches. The book's twenty-five chapters move from the European discovery of North America through the year 2000, evoking American history in a roughly chronological sequence. However, each chapter also has a topical focus, which allows Zinn to trace distinct but intersecting lines of historical influence. Zinn uses these intersections of time and topic as a combination of springboard and platform: he inserts extended meditations on key themes where they grow logically from the narrative of the people's history.

Tell the Copyright Office: Copyright Law Shouldn't Punish Research and Repair After eighteen years, we may finally see real reform to the Digital Millennium Copyright Act’s unconstitutional pro-DRM provisions. But we need your help. In enacting the “anti-circumvention” provisions of the DMCA, Congress ostensibly intended to stop copyright “pirates” from defeating DRM and other content access or copy restrictions on copyrighted works and to ban the “black box” devices intended for that purpose.

'Things will never be the same': the oral history of a new civil rights movement Saturday 9 August 2014: ‘Oh my God, they left him in the street’ PATRICIA BYNES, Democratic committeewoman of Ferguson Township: At first I did not even know his name. It was actually the committee woman of the seventh ward that sent me a text that day. I was out running errands, on my way to the barbershop. And she said, “Tricia, what’s going on in your city?” Forty Remarkable Native American Portraits by Frank A. Rinehart from 1899. - Flashbak Flashbak Frank Albert Rinehart was born in Lodi, Illinois in 1861. At some point in the 1870s he and his brother moved to Colorado and started working at a photography studio in Denver. When he was about twenty, Frank and his brother formed a partnership with the famous Western photographer William Henry Jackson. It was under Jackson that Rinehart perfected his, not inconsiderable professional photography skills. However Frank also became particularly interested in Native American culture. In 1898 Rinehart was commissioned to photograph the Indian Congress, which was held in conjunction with the Trans-Missisippi and International Exposition, and the Native American personalities who were attending it.

Amy Goodman Is Facing Prison for Reporting on the Dakota Access Pipeline. That Should Scare Us All. This Monday afternoon, as the sun hits its peak over Mandan, North Dakota, the award-winning journalist, and host of Democracy Now!, Amy Goodman will walk into the Morton County–Mandan Combined Law Enforcement and Corrections Center and turn herself in to the local authorities. Her crime: good, unflinching journalism. Prominent activists arrested at police brutality protest in St. Louis A group of prominent activists associated with the Black Lives Matter movement were arrested in St. Louis, Missouri on Monday during a protest against police brutality. The protesters, including leaders Cornel West, Deray Mckesson and Johnetta Elzie, were part of a group of 50 or so protesters who crossed a barricade outside the Thomas F.

How All 50 States Got Their Names Alabama Before Europeans landed on American shores, the upper stretches of the Alabama River in present-day Alabama used to be the home lands of a Native American tribe called – drum roll, please – the Alabama (Albaamaha in their own tribal language). The river and the state both take their names from the tribe, that's clear enough, but the meaning of the name was another matter. Barney Frank: Here's how to not waste your time pressuring lawmakers After 32 years in the House of Representatives, here is my advice on how people opposed to President Donald Trump’s assault on our basic values — a majority of those who voted last November — can best influence members of Congress. Done the right way, communications from citizens can have a significant impact on legislators, even when they claim to be immune to “pressure.” (“Pressure,” in legislative jargon, is the expression of views with which legislators disagree, as opposed to “public opinion” — the term used for sentiments that reinforce their own.) The key to doing it right is being clear about the goal, which is to persuade the Senator or Representative receiving the communication that how he or she votes on the issue in question will affect how the sender will vote the next time the legislator is on the ballot. This means the following: