American Rhetoric: The Power of Oratory in the United States 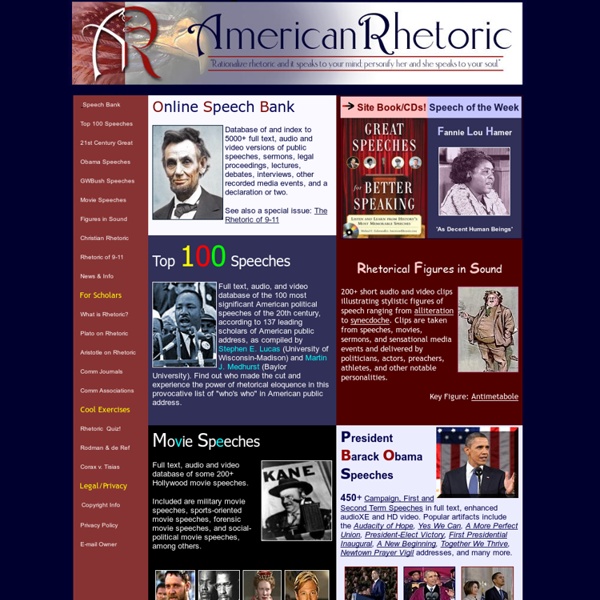 Ancient Treasure Unearthed at Crusades-Era Castle Israeli archeologists this week discovered one of the largest gold stockpiles ever found while digging in an ancient castle that hosted some of the major battles of the Crusades. The cache — discovered in a broken pottery vessel hidden under a floor tile — contained 108 gold coins which archeologists have estimated to be worth over $100,000. Researchers told UPI that crusaders probably hid the treasure trove from invading Muslim conquerors in the mid 13th Century. (MORE: Part of Hitler’s Art Collection Discovered in Czech Monastery) “It is a rare find. Many of the coins — which were discovered by one of Tal’s students in a fortress known as Apollonia about 15 miles north of Tel Aviv — were minted around 1000 A.D., according to the Jerusalem Post. The castle of Apollonia, which was then called Arsur, belonged to the Christian Order of the Knights Hospitaller during the time in which researches believe the cache was hidden. MORE: Jane Austen’s Mysterious Ring Up for Auction

Scalloped Hasselback Potatoes “Scalloped” is an attractive word, isn’t it? When I hear it I think of several things: first, there’s scallops, as in the seafood—totally delicious. Then there’s the scalloped shape that can live on the edge of a pair of shorts or on the collar of a woman’s blouse—always pretty and dainty. And of course scalloped potatoes also comes to mind, which carries my imagination to a land of crispy potato skins drenched in a sea of cheese and cream. The first players up are: a few Russet potatoes (I’m sure other varieties will work equally as well), Parmigiano-Reggiano and butter. Start by scrubbing your potatoes good and clean. Then, using a sharp knife, make slices across the potato, being sure to stop before you reach its bottom. Cut up your butter. Then do the same with the Parmigiano-Reggiano. Next, open the potatoes’ crevices and shove the parmesan and butter, alternating between the two. When they’re done baking, you’re still a few minutes away from cheesy gloriousness! Description

Petra: Lost City of Stone Deep within the deserts of Jordan lies the ancient city of Petra. Through a narrow gorge it emerges into view, revealing awe-inspiring monuments cut into the surrounding cliffs. What is this astonishing city? Who built it, and why? Two thousand years ago, Petra stood at a crossroads of the ancient Near East. Camel caravans passed through, loaded with spices, textiles and incense from distant regions--and through such commerce, the city flourished. The Nabataeans also erected monumental tombs, memorializing their kings and leaders. Today archaeologists are discovering clues to Petra's past. In New York, Petra: Lost City of Stone was made possible by Banc of America Securities and Con Edison.