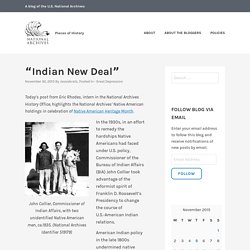 In the 1930s, in an effort to remedy the hardships Native Americans had faced under U.S. policy, Commissioner of the Bureau of Indian Affairs (BIA) John Collier took advantage of the reformist spirit of Franklin D. Roosevelt’s Presidency to change the course of U.S. -American Indian relations. American Indian policy in the late 1800s undermined native culture by forcing Native Americans to assimilate into the European-American lifestyle. Native children were taken away from their families at a young age to off-reservation Indian boarding schools. NCpedia. Trump at G7: How Photos of the Same Scene Can Tell Different Stories.

Stuff You Missed in History Class. Conversations with History. Author List. The Author List This list is intended to provide the writings with some, perhaps minimal, context. 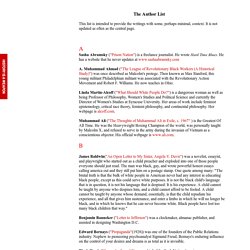 It is not updated as often as the central page. A Sasha Abramsky ("Prison Nation") is a freelance journalist. He wrote Hard Time Blues. He has a website that he never updates at www.sashaabramsky.com A. Linda Martín-Alcoff ("What Should White People Do? ") Muhammad Ali ("The Thoughts of Muhammad Ali in Exile, c. 1967" ) is the Greatest Of All Time. James Baldwin("An Open Letter to My Sister, Angela Y. Benjamin Banneker ("Letter to Jefferson") was a clockmaker, almanac publisher, and assisted in designing Washington D.C. Confederate Statues and ‘Our’ History - The New York Times. History in Dispute: Charlottesville and Confederate Monuments.

Teaching with the News Objectives Students will: Understand the idea of historical memory. 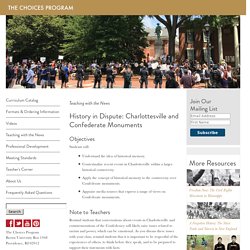 Contextualize recent events in Charlottesville within a larger historical controversy. Apply the concept of historical memory to the controversy over Confederate monuments. Note to Teachers Remind students that conversations about events in Charlottesville and commemorations of the Confederacy will likely raise issues related to racism and power, which can be emotional. We encourage teachers to consider carefully the dynamics of their classrooms as they prepare to use these materials.

You should also read and view all sources before sharing them with students to be sure that they are appropriate for your classroom. Businessinsider.

Development of Democracy. Transatlantic slave trade. Civil Rights Movement. Essential Questions in American History: "The Great Debates" I developed this series as part of my work with Prentice-Hall supporting Daniel Boorstin’s A History of the United States. 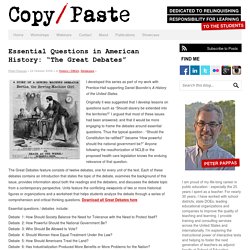 Originally it was suggested that I develop lessons on questions such as “Should slavery be extended into the territories?” I argued that most of these issues had been answered, and that it would be more engaging to frame the debates around essential questions. Thus the typical question - “Should the Constitution be ratified?” Became “How powerful should the national government be?” U.S. History Lessons. The Do-It-Yourself Society. A History of the American People By Paul Johnson. 1,088 pp. 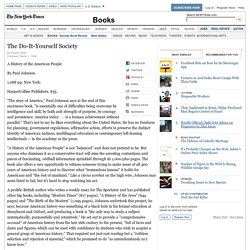 New York: HarperCollins Publishers. $35. ''The story of America,'' Paul Johnson says at the end of this enormous book, ''is essentially one of difficulties being overcome by intelligence and skill, by faith and strength of purpose, by courage and persistence. ''A History of the American People'' is not ''balanced'' and does not pretend to be. A prolific British author who writes a weekly essay for The Spectator and has published other big books, including ''Modern Times'' (817 pages), ''A History of the Jews'' (644 pages) and ''The Birth of the Modern'' (1,095 pages), Johnson undertook this project, he says, because American history was something of a black hole in his formal education at Stonyhurst and Oxford, and producing a book is ''the only way to study a subject systematically, purposefully and retentively.''

Tyrion Lannister, Like Abraham Lincoln, Was Right About How to End Slavery. “How many days were you a slave?” 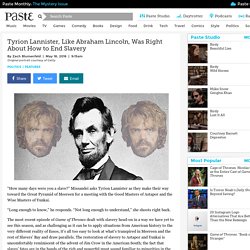 Missandei asks Tyrion Lannister as they make their way toward the Great Pyramid of Meereen for a meeting with the Good Masters of Astapor and the Wise Masters of Yunkai. “Long enough to know,” he responds. “Not long enough to understand,” she shoots right back. The most recent episode of Game of Thrones dealt with slavery head-on in a way we have yet to see this season, and as challenging as it can be to apply situations from American history to the very different reality of Essos, it’s all too easy to look at what’s transpired in Meereen and the rest of Slavers’ Bay and draw parallels.

Peoples history. A People's History of the United States. The Note: This great book should really be read by everyone. 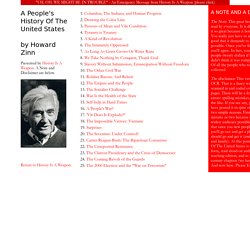 It is difficult to describe why it so great because it both teaches and inspires. You really just have to read it. We think it is so good that it demands to be as accessible as possible. Once you've finished it, we're sure you'll agree. In fact, years ago, we would offer people twenty dollars if they read the book and didn't think it was completely worth their time. People’s History Poster. Primary sources. Raising Our Voices A True Narrative of the Rise, Progresse, and Cessation of the Late Rebellion in Virginia, Most Humbly and Impartially Reported by His Majestyes Commissioners Appointed to Enquire into the Affaires of the Said Colony (1677) Proclamation of the New Hampshire Legislature on the Mast Tree Riot (1734) Letter Written by William Shirley to the Lords of Trade about the Knowles Riot (1747) Thomas Hutchinson Recounts the Reaction to the Stamp Act in Boston (1765) Samuel Drowne's Testimony on the Boston Massacre (1770) George Hewes Recalls the Boston Tea Party (1834) 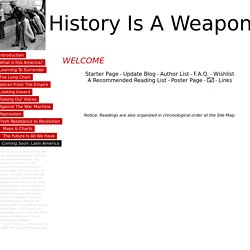 70 maps that explain America. By Max Fisher and Dylan Matthews on July 1, 2015 The United States of America is many things. 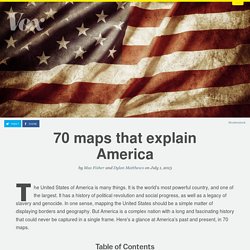 It is the world's most powerful country, and one of the largest. It has a history of political revolution and social progress, as well as a legacy of slavery and genocide. In one sense, mapping the United States should be a simple matter of displaying borders and geography. But America is a complex nation with a long and fascinating history that could never be captured in a single frame. American History. UH - Digital History.