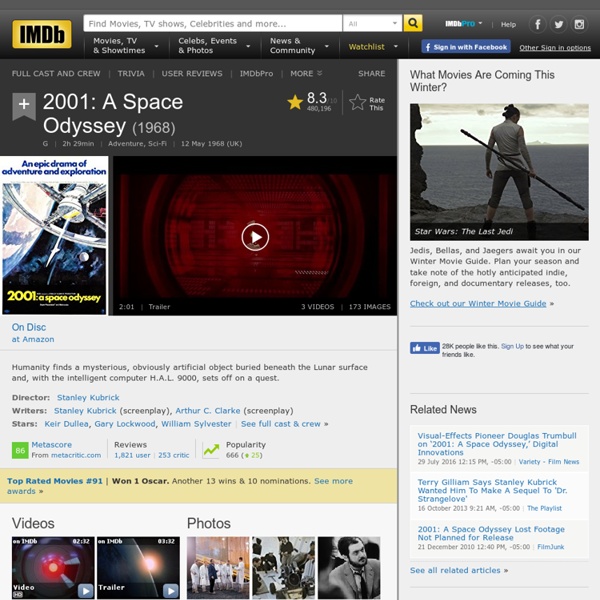 Edit Storyline "2001" is a story of evolution. Sometime in the distant past, someone or something nudged evolution by placing a monolith on Earth (presumably elsewhere throughout the universe as well). Evolution then enabled humankind to reach the moon's surface, where yet another monolith is found, one that signals the monolith placers that humankind has evolved that far. Now a race begins between computers (HAL) and human (Bowman) to reach the monolith placers. Plot Summary | Plot Synopsis Edit Details Release Date: 11 April 1968 (Japan) See more » Also Known As: How the Solar System Was Won See more » Box Office Budget: $10,500,000 (estimated) Gross: $56,715,371 (USA) See more » Company Credits Technical Specs Runtime: | (cut) Color: Color (Technicolor) Aspect Ratio: 2.20 : 1 See full technical specs » Edit Did You Know? Trivia Stanley Kubrick worked for several months with effects technicians to come up with a convincing effect for the floating pen in the shuttle sequence. Goofs Quotes Crazy Credits

All the Robotic Space Explorers since 1958 Kinja is in read-only mode. We are working to restore service. Why do they show the Pioneers and Voyagers as looping around the planets? A Perfect Solar Superstorm: The 1859 Carrington Event Last Thursday, the world braced itself as the strongest solar storm in five years raced toward the planet. Fortunately, it delivered only a glancing blow, and global communications continued to operate without disruption. In 1859 Earth wasn’t so lucky. The Carrington Event On the morning of September 1, 1859, amateur astronomer Richard Carrington ascended into the private observatory attached to his country estate outside of London. After cranking open the dome’s shutter to reveal the clear blue sky, he pointed his brass telescope toward the sun and began to sketch a cluster of enormous dark spots that freckled its surface.

Allen County Library Genealogy Center by Delia Happy Mother’s Day! For many children, this is the day you call, send a card or take your mother a gift. If you are a mother, this is the day your small children bring flowers from your garden and your adult children brave every other family in the country to take you out to eat. But Mother’s Day actually has an interesting history with roots in the Civil War. Top 5 Reasons We Might Live in a Multiverse The universe we live in may not be the only one out there. In fact, our universe could be just one of an infinite number of universes making up a "multiverse." Though the concept may stretch credulity, there's good physics behind it. And there's not just one way to get to a multiverse — numerous physics theories independently point to such a conclusion. In fact, some experts think the existence of hidden universes is more likely than not. Here are the five most plausible scientific theories suggesting we live in a multiverse:

Is an Adjacent Universe Causing the Dark Flow of Hundred of Millions of Stars at the Edge of the Observable Universe? Or, Might It Be Something Else Back in the Middle Ages, maps showed terrifying images of sea dragons at the boundaries of the known world. Today, scientists have observed strange new motion at the very limits of the known universe -- kind of where you'd expect to find new things, but they still didn't expect this. A huge swathe of galactic clusters seem to be heading to a cosmic hotspot and nobody knows why. The unexplained motion has hundreds of millions of stars dashing towards a certain part of the sky at over eight hundred kilometers per second.

Who Goes There? Who Goes There? is a science fiction novella by John W. Campbell, Jr., written under the pen name Don A. Ender's Game Ender's Game (1985) is a military science fiction novel by American author Orson Scott Card. Set in Earth's future, the novel presents an imperiled mankind after two conflicts with the "Buggers", an insectoid alien species. In preparation for an anticipated third invasion, children, including the novel's protagonist, Ender Wiggin, are trained at a very young age through increasingly difficult games including some in zero gravity, where Ender's tactical genius is revealed. The secret foundation that contains the world’s paranormal artifacts By Gavia Baker-Whitelaw on October 26th, 2014 Part wiki, part role-playing game, part storytelling community, the SCP Foundation has spent the past six years lurking in one of the darkest corners of the Internet. Caught in the sweet spot between “cool enough to keep attracting new members” and “obscure enough that no one is likely to Kickstart a documentary about it and ruin everything,” the SCP Foundation is a phenomenon that combines creepypasta—the Internet’s version of campfire horror stories—with the obsessive culture of Wikipedia editing. SCP stands for either Secure, Contain, and Protect (the main aims of the Foundation) or Special Containment Procedure.

Understanding Knowledge as a Commons Knowledge in digital form offers unprecedented access to information through the Internet but at the same time is subject to ever-greater restrictions through intellectual property legislation, overpatenting, licensing, overpricing, and lack of preservation. Looking at knowledge as a commons—as a shared resource—allows us to understand both its limitless possibilities and what threatens it. In Understanding Knowledge as a Commons, experts from a range of disciplines discuss the knowledge commons in the digital era—how to conceptualize it, protect it, and build it. Contributors consider the concept of the commons historically and offer an analytical framework for understanding knowledge as a shared social-ecological system. They look at ways to guard against enclosure of the knowledge commons, considering, among other topics, the role of research libraries, the advantages of making scholarly material available outside the academy, and the problem of disappearing Web pages.

15 Mind-Blowing Images by NASA The NASA Goddard Space Flight Center is home to the United States’ largest organization of combined scientists, engineers and technologists that build spacecraft, instruments and new technology to study the Earth, the sun, our solar system, and the universe. They are also home to some of the most amazing images, visualizations and videos NASA has to offer! Please do yourself a favour and check out their incredible Flickr page which has thousands of images with wonderfully detailed descriptions. SCI-FI Writing Kinja is in read-only mode. We are working to restore service. I give a hearty Here Here for #4! There is nothing wrong with telling a story that fits within the covers of a single book.

In praise of the sci-fi corridor There's a moment in every geek's life when one goes for the 'communal hug' on a pet-subject and finds oneself unexpectedly out in the cold. The piano player stops playing. The landlord shakes his head as his eyes head heavenward, and he slinks away to rearrange the crisps. The lonely sound of a misdirected dart is all that haunts the otherwise silent pub. And it's definitely time to get your anorak.