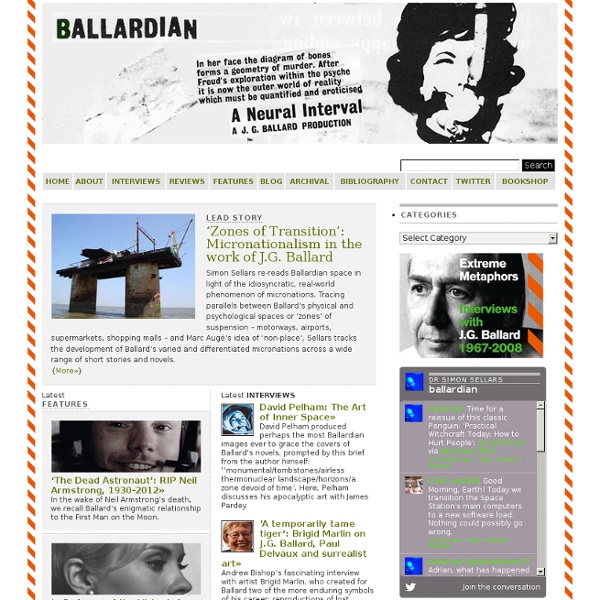 Worlds Without End: Science Fiction, Fantasy & Horror Books sub rosa Cold Drank | Innovative, soulful essays and short fiction that explore popular culture and politics. Asymptote Science-fiction classics that have rewired your brain - Image 3 Image 3 of 8 Tunes from Mars Taking a completely different attitude to Martians, Raymond Taylor's marching tune A Signal from Mars is jaunty in the extreme. Published in 1901, the piece became immensely popular but has little to do with its title. Observant readers may notice that the piece was arranged by E. (Image: British Library Board)

Book Me… Flannery O'Connor: Comforts of Home, The Flannery O'Connor Paris Review Daily - Blog, Writers, Poets, Artists - Paris Review Donald Barthelme would’ve been, and should be, eighty-three today. It would be an exaggeration to say that I feel the absence of someone whom I never met—someone who died when I was three—but I do wonder, with something more than mere curiosity, what Barthelme would have made of the past twenty-odd years. These are decades I feel we’ve processed less acutely because he wasn’t there to fictionalize them: their surreal political flareups, their new technologies, their various zeitgeists and intellectual fads and dumb advertisements. But I’m losing the thread. I wanted to say something about lists. A zombie advances toward a group of thin blooming daughters and describes, with many motions of his hands and arms, the breakfasts they may expect in a zombie home. The list is the ideal vehicle here. INTERVIEWERWordsworth spoke of growing up “Fostered alike by beauty and by fear,” and he put fearful experiences first; but he also said that his primary subject was “the mind of Man.”

How to write a bestselling dystopian thriller So Many Books About Orwell Welcome to the Orwell Prize’s library of works about George Orwell and his work (and a few things about the Prize), consisting of material exclusive to this site and links to external sites. We’ll continue to add to the library, so please get in touch if you find any good work about Orwell online. Articles and videos are arranged in alphabetical order, by author, after a link to University College London’s Orwell Archive. Orwell Archive, UCL David Aaronovitch 1984: George Orwell’s road to dystopia (BBC News Magazine) Marina Rémy Abrunhosa Face-to-face encounters in Orwell’s early works (video) Akala Doublethink: Interview Noel Annan Artist in politics (New York Review of Books, £) Andrew Anthony Orwell: the Observer years (The Observer) Stephen Armstrong Back on the road to Wigan Pier: politics and poverty in the UK Timothy Garton Ash Margaret Atwood John Banville Good man, bad world (New York Review of Books, £) Julian Barnes Such, such was Eric Blair (New York Review of Books) Stephen Bates John Baxendale