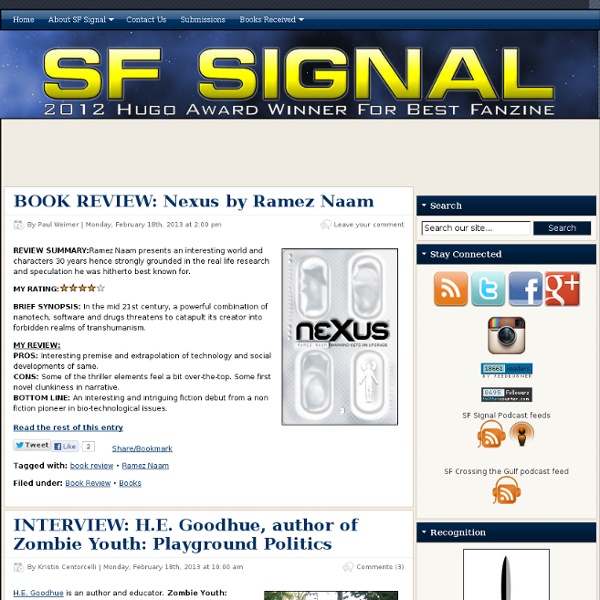 Well this was cool…. The end of evolution awaits in a wasteland dominated by bizarre trash formations, dust and rock. From the scattered remains of a long forgotten culture an electric ecosystem rapidly evolves into the ultimate form of existence…The mechanical life form Ohm inhabits a bleak and devastated planet. The thousands of mechanical creatures of this world share a single cycle of energy. In this cycle, Ohm is a rogue element. His nature is to devour and absorb others.

How to Create a Unique Magic System for Your Book: 6 steps Edit Article Edited by Jonta, Maluniu, Grendle, Anonymo and 14 others Ever feel that books such as Harry Potter have taken all the good Magic set-ups in books? Despite the thousands of types of magic in books, it's still possible to make a brand new magic. The Best Science Fiction Books (According to Reddit) Recently, someone asked Reddit for a list of the best science fiction books of all time. Being a fan of sci-fi, and wanting to expand my own reading list, I thought it would be helpful to tally the results and preserve them here for future reference. I've also included selected quotes from the comments, as well as my own notes on the books I've already read. PS: All book images in this post are copyright Amazon, and were retrieved using my Big Book Search Engine.

Science Fiction and the City: Film Fest Update! [Image: Ben Procter]. A few weeks ago I announced that BLDGBLOG and Materials & Applications had teamed up to curate an architectural film fest as part of this year's Silver Lake Film Festival here in LA. Well, I have some exciting news to announce: on Tuesday, May 8th, from 8-10pm, inside a converted wind tunnel in Pasadena, we'll be hosting an evening full of talks and presentations about film, science fiction, space, landscape, and architecture. 47 Mind-Blowing Psychology-Proven Facts You Should Know About Yourself I’ve decided to start a series called 100 Things You Should Know about People. As in: 100 things you should know if you are going to design an effective and persuasive website, web application or software application. Or maybe just 100 things that everyone should know about humans! The order that I’ll present these 100 things is going to be pretty random.

Top 25 Best Fantasy Books The Wheel of Time turns and Ages come and go, leaving memories that become legend. Legend fades to myth, and even myth is long forgotten when the Age that gave it birth returns again. In the Third Age, an Age of Prophecy, the World and Time themselves hang in the balance. What was, what will be, and what is, may yet fall under the Shadow... I can truthfully say that Jordan is the King of Fantasy, if not in complexity, then in page count. This monstrously big series spans over 13 massive books (each at least 700 pages). Brandon Sanderson: Sanderson's Second Law A few years back, I wrote an essay on creating magic systems that I titled Sanderson’s First Law. It had to do with the nature of foreshadowing as it relates to solving problems with magic. In that essay, I implied that I had other “laws” for magic systems that I’d someday talk about. Well, that time has come, as I’ve finally distilled my thoughts for the second law into an explanation that will work. I’ll start, however, by noting that none of these “laws” are absolute. Nor am I the only one to talk about them.

Know the Answers to These Questions Before Your Job Interview @Adam: rrrr... last time I checked if you want to go work as a webdesigner in a webdesign company you still have to go in for a jobinterview @Adam: For web designers, the only things I really care about is samples and how long it takes them to complete a given piece of work. So if you mainly work on the web, make a webspace, showcasing all the work you have done with thumbnails linking to full size screenshots, and a link to the actual site as well. The reason for the screenshot, is in case the site disappears or they change their layout. Mention if you can make designs in html, asp, php, or which ever languages you can do, if it applies.

Depression Infographic - Treatment Effectiveness vs Popularity Depression (11,742 members) StatsSurveyDiscussInfographic This infographic is based on a total of 30,359 treatment effectiveness ratings. Read the blog post for this infographic or Take the survey yourself Brandon Sanderson: Sanderson's First Law Introduction I like magic systems. That’s probably evident to those of you who have read my work. A solid, interesting and innovative system of magic in a book is something that really appeals to me. True, characters are what make a story narratively powerful—but magic is a large part of what makes the fantasy genre distinctive. For a while now, I’ve been working on various theories regarding magic systems.

The 20 Best Travel Websites on the Internet - Golden Book Traveler Update: Visit the 2012 version of The 20 Best Travel Websites on the Internet I hope that everyone who attended my SXSW Core Conversation panel on How to Make Money Traveling Around the World enjoyed the presentation. As promised, I have a listing of my top 20 favorite travel websites (in no particular order). I’m still working on my eBook “70 Vacations in 7 Months“. The project has consumed most of my time of late. Blog Archive » 6 Surprisingly Effective Treatments for Depression Click here for the live-updated, interactive version of this infographic, with all the dots labeled. This is how it happened. When my amazing CureTogether co-founder Daniel Reda flipped his screen around to show me this infographic, my excitement at how beautiful it looked was quickly replaced by my curiosity for what it showed.