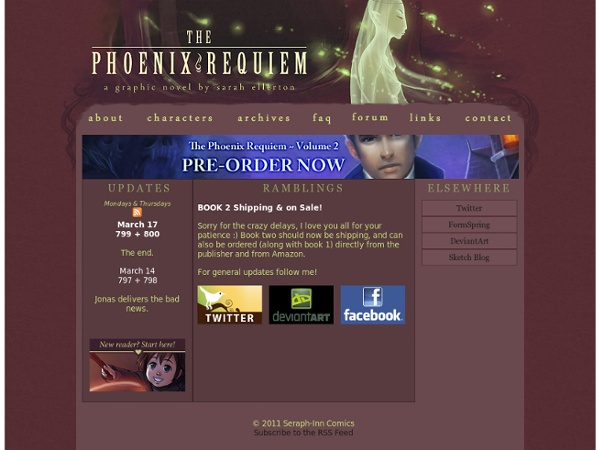 Petite Symphony KnuckleUp! As many of you have probably already noticed, Godai has started up another regular comic to post on Sundays. Join Rushana, Hawke, and Moon as they travel across the galaxy tracking down shards of a magical talisman in KnuckleUp! Also, Year of the Cow has been moved to hiatus for the time being while Simon and Dew tackle some life events. We’ll keep you posted on updates of it’s return to active status. Generation 17 Joins and PS turns Three The Becoming - A Gothic Steampunk Fantasy Graphic Novel Cuanta Vida - A Team Fortress 2 Fan Comic Questionable Content Rice Boy Rice Boy is a brightly colored and surreal fantasy adventure story, set in the ninth century of the Red Age of Overside. It was started in April 2006 and finished in May 2008. It is divided into five books, and available in one printed edition. You can read the entire story here. Purchase the Book | Purchase the Limited Hard-Cover Book

Unsounded September 23, 2016, at 12:00 AM With these two NSFW pages and a Ch12 preview, that's a wrap for chapter 11! Unsounded's been going since July of 2010. Six years! Eerie Cuties Dr. McNinja Fantasy Webcomic Comic Graphic Novel It’s finally time to present the submissions placed between the positions 13 and 25 of the Sandra and Woo and Gaia artwork contest. There are some great works of art to be seen here, partially thanks to the extension of the submission period. I would like to thank all artists who have submitted a drawing or other piece of art. Don’t forget to check out the first batch of submissions which I posted on Monday. Please show your support by visiting the artists’ websites and writing a comment in the comment section of this blog post!

Chester 5000 XYV Friday — April 15th, 2016 Chester 5000 Valentines! February 13th, 2016 I made some Chester valentines for you! I posted a high res image of these on my Tumblr that you can print out and cut out! 293 Romantically Apocalyptic Goblins BRINK - You’re not as crazy as you think you are So here we are at the end, and pardon the use of cliches, but what a long, crazy ride it’s been. BRINK started back in 2006, and it seems fitting we end just shy of the original date it started over the 4th July weekend after attending Anime Expo so many years ago. This comic has always been, from it’s stat an experiment, one to test if I have the will power and dive to continuously update a story week to week, as well as push and play with visual story telling. Did everything turn out the way I had set it up in my mind almost 6 years later? Not perfectly, one thing I’ve taken away from this very long term test, is that I require a fully scripted comic to keep up with. If I could go back and redo a large portion of this story, I would have, there’s a lot I’m not 100% happy with.