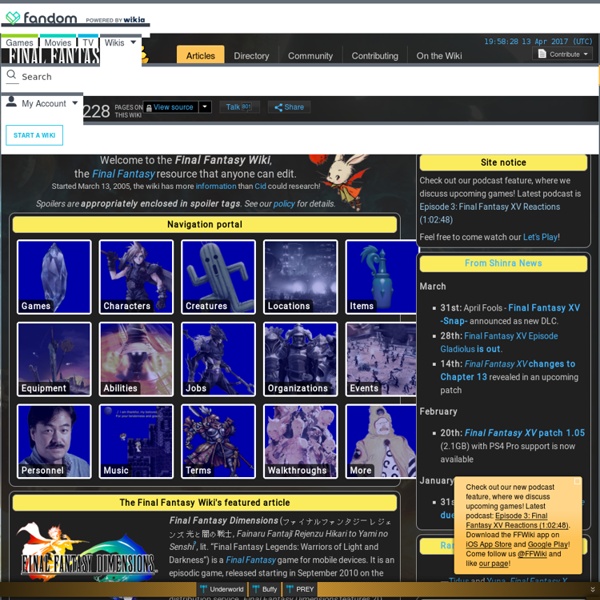 Video Game Music at Galbadia Hotel Final Fantasy Music & Video Game Music Snowfly Forest — Vagrant Story Q&A with Yasumi Matsuno on Twitter - Contains Spoilers The Final Fantasy VII Citadel final fantasy 12 « Scibbe.com If the kids are the foundation of Final Fantasy XII, and the nobles are the driving force behind its plot, I think it’s certainly fair to say that the sky pirates are its heart and soul. Balthier and Fran are, unquestioningly, the most memorable PCs in the game. Fantasy writing — and JRPGs in particular [...] The first thing a fantasy story does is belch out a bunch of nonsense words at you. These nonsense words are supposedly the names of places, important characters, groups of people, concepts or ideas… but you won’t remember any of them because a stream of nonsense words doesn’t mean anything without context. Look up on GameFAQs which arbitrarily-placed treasures to avoid. Among the harshest criticisms lobbed at Final Fantasy XII is the alleged “pointlessness” of Vaan and Penelo. Sony finally got their act together and re-launched PSN, so I was able to log in and push the magic button I needed to push in order to gain access to Portal 2 on my PC.

Auronlu's Complete FFX Script - Final Fantasy X - Chapter I: Into Spira Welcome to my Complete Final Fantasy X transcript, one of my Final Fantasy Fandom sites! Version 3.0 done as of 1/6/08! Disclaimer: Final Fantasy X is the creation of Square-Enix and belongs to them in every way. If you don't own the game, buy it , because you're missing something special. Chapter 1: Into Spira Prologue Narrative: Listen to my story. Zanarkand Dock in front of Tidus' house boat... [crowd noise, fans run towards Tidus' house and wave as he emerges. Talking to fans on the dock... Woman in gray sweater: I've been a big fan of yours. Man with Spiderman jacket: Hey, how are you feeling? Guard, man in yellow pants, another kid: Good luck! Woman in brown skirt: Are you gonna show us that shot tonight? Creepy Little Kid: The game tonight...It's very important. Woman in pink top: Can I have your autograph? Kid w/bandana: Can you sign this? Kid w/striped shirt: Your floating house... Kid w/bandana: (Giggle) Thanks for the autograph! Kid in blue shirt: Hey, show me how to play! You bet!

Final Fantasy Compendium com·pen·di·um / n. Summary or abridgment. [L] Welcome to the FF Compendium! An unofficial and in-progress translation of this site in Korean can be found here. End of an Era - June 4th, 2009 - Update by Cidolfas Last month, the FF Compendium quietly celebrated its tenth anniversary. When the site first started, FF8 had just come out, and the FF series was a large but quite manageable world to explore. The site isn't going anywhere, worry not. I couldn't have got here by myself. Thanks to everyone who worked on the site content with me, for however brief a time: Weiila, Walhalla, NikkiNeko, Faetan, Wilfredo Martinez, RoguePaladinTrian, Paramekia, Sabbathiel, ShingoBunny, [Ice][Angel], Ichimonji, Ianas, and reckless ronin. Finally, thank you to all those who read the site and incessantly pointed out corrections and improvements. I'm not disappearing. It's been a great ten years. ----Cidolfas, June 4, 2009 Previous Updates... This site was created by Cidolfas.