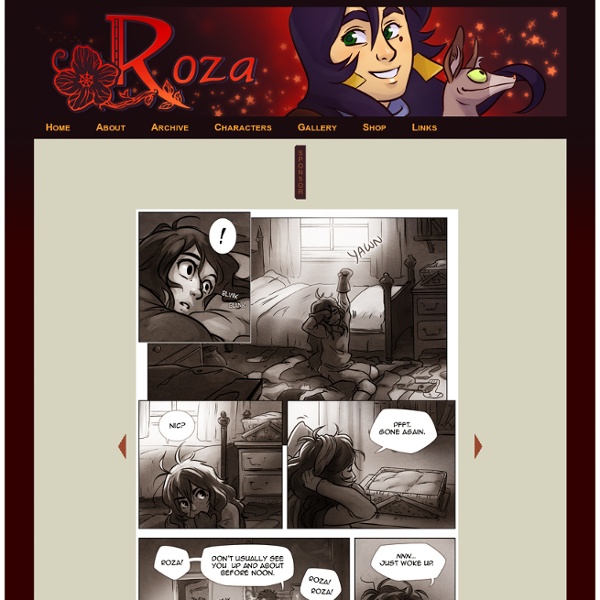 A Redtail's Dream T-the end! Oh noes, I should write some kind of deep and heartfelt ending speech here , but... I I can't pull that off right now. Outsider Outsider posts new pages (when available) on Mondays, but updates can be irregular, so I encourage you to use the RSS feed, Facebook or Twitter for notifications if you're interested in keeping up. [WIP Thread] 4 April 2016: New page: 112 Sorry for the slow pace of updates over the last few months. Trying to fix that. 2 February 2016: New page: 111 31 December 2015: New page: 110 I'll get this update schedule figured out sooner or later.

Unsounded September 23, 2016, at 12:00 AM With these two NSFW pages and a Ch12 preview, that's a wrap for chapter 11! Unsounded's been going since July of 2010. Six years! 11 chapters and 940 colour pages to date. Not a bad run! D 0 0 R - toilet genie TG 123 <~ it's 1 2 and 3!!! THAT'S IMPORTANT.Posted on 17 Jan 2013 01:41 am by blix It was a childhood dream of mine to draw manga, and use the most ridiculous patterns I could find in the background. PAD AND TAMPON BACKGROUND IS NOW UNLOCKED. Soooo yeah. It's been two months. Unsounded AboutComicWorldMiscellanyShop Chapter 12: The Collar of Kasslyne In Which The Question Itself Is Called Into Question

Gaia It’s finally time to present the submissions placed between the positions 13 and 25 of the Sandra and Woo and Gaia artwork contest. There are some great works of art to be seen here, partially thanks to the extension of the submission period. I would like to thank all artists who have submitted a drawing or other piece of art.

Valentine's Dei Yeah, I know, it’s been a while. I just checked the date on the last page we posted and it was almost a year ago. Not something we ever wanted, but there wasn’t a whole lot we could do about it. Life just got in the way, and maybe we could have turned something out, but it would’ve been substandard. We don’t do substandard. Snarlbear 14th Apr 2014, 9:39 PM in Chapter 6: Professional Courtesy Author Notes: Gearfish 14th Apr 2014, 9:39 PM edit delete um