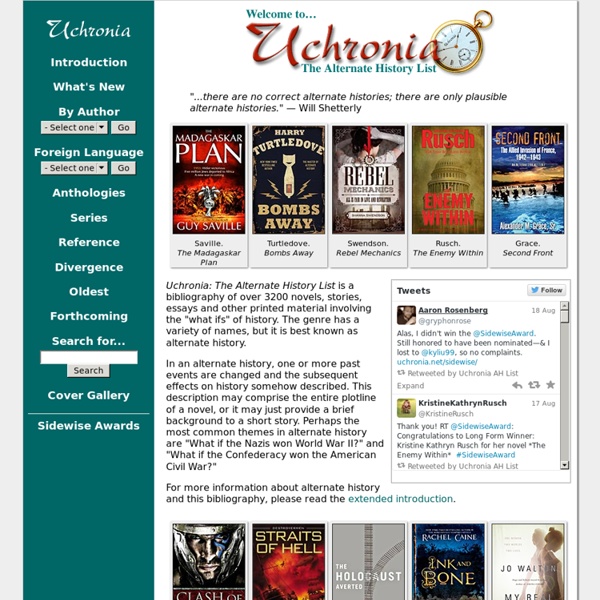 "What might have been is an abstraction Remaining a perpetual possibility Only in a world of speculation." — T.S. Eliot Wheeler. Three Princes Conroy. Liberty: 1784

Blame Asimov's: My 10 Favorite Alternate History Stories Though my kids are mostly too young to stay up for , we occasionally watch parts of the show online. Currently, their favorite is the Timecrowave sketch. They love it, not the least of which because of the Nazis, the giant cat at the end, and the talk about danger to the space/time continuum. Their interest in the sketch started me thinking about alternate history stories in general. I’ve always been fascinated by the idea that one change, large or small, can forever alter our world. I got hooked on alternate history stories in my teens after reading number of great stories in Asimov’s Science Fiction magazine and many of them have stayed with me.

40 maps that explain the world Maps can be a remarkably powerful tool for understanding the world and how it works, but they show only what you ask them to. So when we saw a post sweeping the Web titled "40 maps they didn't teach you in school," one of which happens to be a WorldViews original, I thought we might be able to contribute our own collection. Some of these are pretty nerdy, but I think they're no less fascinating and easily understandable. A majority are original to this blog, with others from a variety of sources. Historical Tapestry: Into The Wilderness by Sara Donati It is December of 1792. Elizabeth Middleton leaves her comfortable English estate to join her family in a remote New York mountain village. It is a place unlike any she has ever experienced. And she meets a man unlike any she has ever encountered--a white man dressed like a Native American, Nathaniel Bonner, known to the Mohawk people as Between-Two-Lives. Determined to provide schooling for all the children of the village, she soon finds herself locked in conflict with the local slave owners as well as her own family.

6 Eerily Specific Inventions Predicted in Science Fiction Science fiction is by far the nerdiest of the fictions, and its bread and butter consists of robot uprisings and unexpected time travel consequences. But for every Martian invasion and robocop-related mishap it has warned about, science fiction has made some stunningly accurate premonitions. We're not talking about broad predictions, like "thinking machines" or "interplanetary travel."

40 Most Popular Social Networking Sites of the World "Social networking" has been around forever. It's the simple act of expanding the number of people you know by meeting your friends' friends, their friends' friends and so on. In fact, many of us today use Twitter and Facebook to promote our existing and upcoming businesses. And people looking to connect with other business-associated contacts usually move to sites like LinkedIn, but one need to understand that social media is beyond Twitter, Facebook, LinkedIn and Blogs. After observing and running an analysis on hundreds of Social Networking sites I have listed down 40 most popular social networks across countries.

Genre-ville book map My Wasps journey started, like so many others, in Sudbury about 20 years ago when I started attending matches with a mate, sadly gone now, whose family were like Wasps royalty - former captains and chairmen and the like. It took us on to Loftus Road, where the ownership of Chris Wright ushered in what might now be thought of as the golden age. I was a season ticket holder for a good while and loved the old cramped ground. It was at Loftus Road that the Club came the closest to building a large enough following to support it in the modern professional era. And many times since I've wonder if the Heineken Cup triumphs that followed, as well as England winning in 2003, might have sparked enough interest to drive crowds towards the 18 to 20 thousand level that might have made it London's true rugby home.

The Essential Posthuman Science Fiction Reading List Is Frankenstein told from the point of view of the monster? I seem to remember it starting off with correspondence between Captain Walton and someone (his sister?) then switching over to a narrative from Frankenstein himself as he tells Walton the who sordid story, before finishing with the narration from Walton again. At one point Frankenstein tells Walton the part of the story the monster told him, but that's as close as I remember it getting to the monster relating any part of the story.

25 Social Media Channels You're Probably Not Using Now Chances are your small business has used social media in one way or another. There are the big guns like Facebook, Twitter, and LinkedIn. And other familiar names like Instagram, Pinterest, and Vine. However, these are just a drop in the bucket when it comes to all of the social media channels out there. Check out our list of social media channels you’re probably not using and see if any have potential for your business.

If you like ... The Da Vinci Code by Dan Brown Books featuring codes, religion, the art world, conspiracies, fast moving action, historical or scientific details, biblical tie-ins… A Christchurch City Libraries booklist. 9 items The Templar Legacy Book - 2006 Economist Paul Krugman Is a Hard-Core Science Fiction Fan Nobel Prize-winning economist Paul Krugman has been a fan of science fiction since he was a teenager. Photo: Fred R. Conrad If you follow the news at all, you’ve probably seen Paul Krugman — Princeton professor, New York Times columnist, and Nobel Prize-winning economist — championing the idea that government spending can lift us out of the economic crisis. What you may not know is that Krugman is also a huge science fiction fan. 7 Signs Your Havingness Level is Dangerously Low » BAD WITCHES witchery Published on December 20th, 2014 | by Carolyn Elliott Your havingness level is an internal barometer of how much good stuff you allow yourself to have before your “too good to be true!” alarm bell goes off and you start unconsciously freaking out and rejecting that good stuff. The “good stuff” that a low havingness level will cause you to reject may be just about anything – love, money, sex, fun, creativity, joy.

Elvenpath Site Details Look up... Posts Posts Blogs Directory » Literature Terraforming the Solar System: Q&A With Kim Stanley Robinson While Earth may be wracked by the consequences of climate change in 300 years, humanity might have moved on to occupy the planets, moons and asteroids of the solar system. That's the vision presented in a new novel by science fiction heavyweight Kim Stanley Robinson called "2312," out May 22 from Orbit Books. In Robinson's imagining, people live under a giant sunshield on Venus and inside a rolling city that traverses Mercury. They take space elevators up and down to Earth, where huge populations of humans still live, though most of the large mammals have died out. SPACE.com recently caught up with Robinson to discuss the ins and outs of terraforming, predicting the future, and why we need space elevators. Here's Part 1 of our two-part interview.