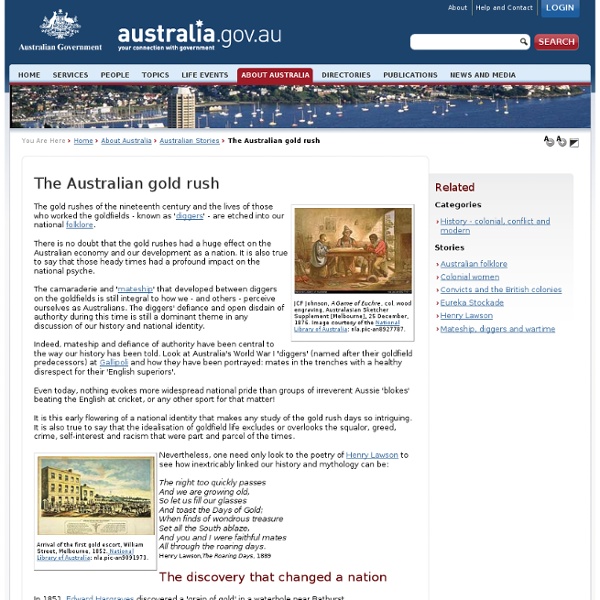 JCF Johnson, A Game of Euchre, col. wood engraving, Australasian Sketcher Supplement [Melbourne], 25 December, 1876. Image courtesy of the : nla.pic-an8927787. The gold rushes of the nineteenth century and the lives of those who worked the goldfields - known as '' - are etched into our national . There is no doubt that the gold rushes had a huge effect on the Australian economy and our development as a nation. It is also true to say that those heady times had a profound impact on the national psyche. The camaraderie and '' that developed between diggers on the goldfields is still integral to how we - and others - perceive ourselves as Australians. Indeed, mateship and defiance of authority have been central to the way our history has been told. Even today, nothing evokes more widespread national pride than groups of irreverent Aussie 'blokes' beating the English at cricket, or any other sport for that matter! The discovery that changed a nation Gold frenzy A nation transformed Racism Gold Rush

GoldRush Chinese at the Australian Goldfields Chinese at the Australian Goldfields At the time that news about the Australian goldrush reached China in 1853, the country had been suffering from years of war and famine. In order to raise money for the fare to Australia, a man would take a loan from a local trader, agreeing to make regular repayments. A village in China When the Chinese arrived at the goldfields, they stayed together in large teams with a head man in charge. There was ignorance about Chinese customs and culture, and the Chinese seemed very strange and different to the European diggers. In an attempt to limit the number of Chinese at the goldfields, a law was passed in 1885 that any Chinese person entering Victoria would pay ten pounds tax, and one pound for a protection fee, the right to mine and live in the colony. Some Chinese returned home after the gold rush, but many stayed here. The inside of a Chinese temple

Chinatowns across Australia Chinatowns developed in Australia as a result of the large influx of Chinese migrants, which was driven by a system of indentured labour and then the gold rushes of the 1850s. Hou Wang Temple, Atherton. Image courtesy of the . Chinatowns developed as concentrations within capital cities and thriving rural towns, with businesses, temples, theatres and schools. The businesses in Chinatowns offered accommodation, medicinal herbs, fresh food grown by Chinese market gardeners and groceries. There were also restaurants, noodle houses, tobacconists, butchers, clerks, carpenters and interpreters. Chinese goods, especially tea, silk, vegetables, herbs, ginger and other spices were highly sought after items of trade by non-Chinese people. Over time, many of the early buildings were demolished subject to decay, lost to fire or, in Darwin, bombed in the Second World War. Chinese settlers in Australia Ah Xian, China China Bust 71, 2002. Chinese market gardener Atherton. Roe St Perth Chinatown. Canberra

GOLD The gold fields were Australia’s first experience of a truly diverse population. The largely British population expanded to include people from all over the world, creating a diverse mix of language and culture. Polish digger Seweryn Korzelinski wrote in his memoirs "a happy-go-lucky German tailor, a brawny English smith, a slightly-built French cook, a Polish Jew, an American or Dutch sailor, watchmaker, confectioner, a Swiss hat-maker, an impoverished Spanish hidalgo, gather near a mound of earth and one can see amongst them here and there a black Negro head, a brown Hindu face or the olive countenance with slanting eyes of a ‘child of the sun’. The diggers’ life Most of these migrants lived harmoniously on the gold fields. Inherent prejudice The migrants may have discarded customs and cultures but they kept the prejudices of their homeland. ‘Where do you come from?’ ‘Poland’ ‘Why didn’t you tell me that before?’ ‘Why should you be so interested in it?’ Credits By Suzie Hoban

Gold rush history - Australia's Golden Outback The Western Australian gold rush began with the first discovery of gold in the late 1890s. News of the gold spread as fast as the region’s wildfires and soon gold prospectors were arriving to seek their fortune and set up gold rush towns in the dusty landscapes of the Kalgoorlie, Goldfields and Murchison regions. They came slowly at first, but as the finds grew so too did the population. Lonely clusters of tents and rough bough sheds were soon transformed into booming Western Australian gold rush towns. Grand hotels lined the main streets and bustling town centres soon boasted butchers, bakers, schools and churches. Many of the original townships remain and though the populations are not as huge, the character buildings and museums provide a fascinating glimpse into the wild and colourful spirit of the gold rush era. Take a journey of discovery, starting at the Prospectors and Miners Hall of Fame in Kalgoorlie-Boulder and visiting some of the region’s many museums.

The Overland Telegraph For the early settlers, Australia was a harsh and unforgiving land. Not only was the landscape unfamiliar and threatening, but the sheer vastness of the continent and its distance from everything and everyone meant it was virtually isolated from the rest of the world. News and letters had to travel halfway around the world by horse, ship and —a trip that took up to five months each way. Jack Laver, Bob Carew up a pole of the Overland Telegraph Line, 1921. And it wasn't much easier for communication between cities, towns and settlements within the colony itself. This tyranny of distance, as it has been dubbed by historian , led to the development of one of this country's greatest engineering and technological feats—the Overland Telegraph. But the story of the overland telegraph is as much about the people, politics and challenges involved as it is about the achievement. A grand plan Morse telegraph 1844 Charles Todd, ca.1871. Colonial telegraph 1860 Race for a cross-continent route

Discovery of Gold Discovery of Gold - A Brief History In 1837, under pressure of a bad drought, Thomas Learmonth and a group of squatters explored the area to the north of their settlement near Geelong in search of better watered regions. On this journey they reached and climbed Mt. During the next 13 years, shepherds and their flocks roamed in the area with Buninyong becoming the service township for the settlers. The discovery precipitated a great rush to the area which in turn resulted in the rapid growth of the new town of Ballarat. In that same year, 10,000,000 grams of gold were transported under police escort to the Melbourne Treasury. In the 1860's, when the shallow alluvial deposits began to run out, companies were formed to exploit the deep quartz lodes. In 1870, wild speculation caused a recession of the mining industry and dozens of companies failed. Ballarat's last mine closed down in 1918. Ballarat was the scene of Australia's most famous civic insurrection.

Gold Rush Facts As of July 1, 2013 ThinkQuest has been discontinued. We would like to thank everyone for being a part of the ThinkQuest global community: Students - For your limitless creativity and innovation, which inspires us all. Teachers - For your passion in guiding students on their quest. Partners - For your unwavering support and evangelism. Parents - For supporting the use of technology not only as an instrument of learning, but as a means of creating knowledge. We encourage everyone to continue to “Think, Create and Collaborate,” unleashing the power of technology to teach, share, and inspire. Best wishes, The Oracle Education Foundation