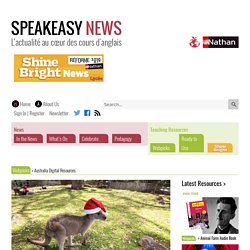 Australia Day on 26 January is a great time for some Oz-themed resources. This is a nice easy short video about finding your own way to celebrate Australia Day. From A2. This is an excellent interactive quiz game about Australian symbols, holidays and traditions. For each question, players can click to get simple information about the photo and choose to keep or eliminate it to work towards the answer to a question.

For 2017, Australia Day organisers in Sydney are encouraging the public to learn a song in the local Aboriginal language. School of the Air in Australia – Speakeasy News. In this A2 article your students will discover the special distance-learning schools which provide classes for children in the Australian Outback who live hundreds or even thousands of kilometres from the nearest school. 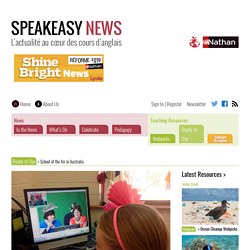 We suggest going further with two downloadable short videos. Saving Nemo – Speakeasy News. Australia fires: Life during and after the worst bushfires in history - CBBC Newsround. When trees make rain: Could restoring forests help ease drought in Australia? - Science News - ABC News. If you've ever walked in a rainforest or even a greenhouse, you'll know that the air inside is heavy with moisture. This phenomenon is caused by trees releasing water vapour through pores in their leaves called stomata. We also know that many big forests, and rainforests in particular, tend to get more rain than surrounding areas — hence the name. Extreme Australia - Pilot Guides - Travel, Explore, Learn. It’s hard to believe that one country can be home to arid deserts, lush rainforests and sprawling, temperate metropolises, but Australia’s sheer vastness means that it plays host to a number of different climates. 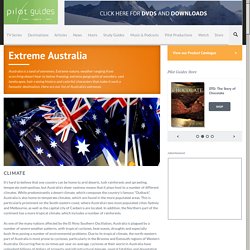 While predominantly a desert climate, which composes the country’s famous “Outback”, Australia is also home to temperate climates, which are found in the more populated areas. This is particularly prominent on the South-eastern coast, where Australia’s two most populated cities-Sydney and Melbourne, as well as the capital city of Canberra are located. In addition, the Northern part of the continent has a more tropical climate, which includes a number of rainforests. As one of the many nations affected by the El Nino Southern Oscillation, Australia is plagued by a number of severe weather patterns, with tropical cyclones, heat waves, droughts and especially bush-fires posing a number of environmental problems. 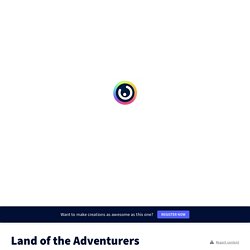 Bloggers Unit 3. Discovering Australia. Tourism. 5 Questions to Ask Yourself BEFORE You Travel Outback. Just how ready are YOU to travel the outback? 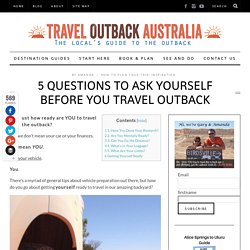 No, we don’t mean your car or your finances. We mean YOU. Not your vehicle. You. There’s a myriad of general tips about vehicle preparation out there, but how do you go about getting yourself ready to travel in our amazing backyard? To help you think beyond just your car and what kind of tyres you might need, we’ve come up with five questions you need to ask yourself before you go. We’ve written this article for people who’ve either never travelled -or haven’t done much travelling- in the outback before. However, you more experienced adventurers might also like to read and reflect upon how you prepare yourself for your big trip. 1.

Sure, you’ve got the maps and you’ve got the 4WD… but have you really done your homework? This sounds really obvious but… It’s not just about knowing where to stay and what the road will be like – it’s so you can prepare yourself. Do you have the ability to drive to the places you want to go? 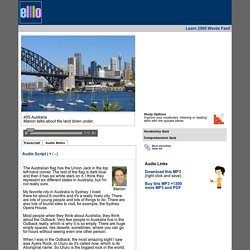 A 'really lively city' has a lot of activity going on all the time. There are many things to do and see. Notice the following: During vacation times this becomes a really lively city. Huge empty spaces, like deserts. Elllo #311 Aussie Sports. No worries No worries. 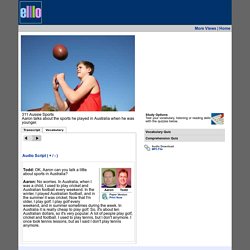 Elllo #403 Aussie Animals. Marion There are many dangerous animals in Australia like the crocodile for example. 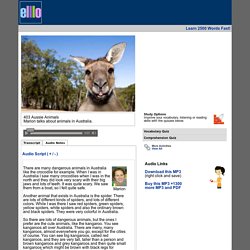 When I was in Australia I saw many crocodiles when I was in the north and they did look very scary with their big jaws and lots of teeth. It was quite scary. We saw them from a boat, so I felt quite safe. Another animal that exists in Australia is the spider. So there are lots of dangerous animals, but the ones I prefer are the cute animals, like the kangaroo. My favorite Australian animal, though, is the koala. Australia - Images gratuites sur Pixabay - 2. Map of Sydney Australia. Maps Related to New South Wales Sydney, Australia Sydney is the most populated city of Australia, and is the capital of New South Wales. 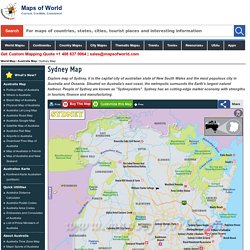 It is also the site of the first British colony in Australia and is a huge natural harbor. It is one of the most beautiful and livable cities of the world and contains a rich and ethnically diverse population.About the City The city of Sydney covers an area of 12,144.6 sq km and had an approximate population of 4,627,345 in 2011. It is identified by two famous iconic structures which distinguish the skyline. These are the Sydney Opera house and the famous Harbor Bridge. The area of the city was originally occupied by the indigenous Cadigal people of Australia. Australia.