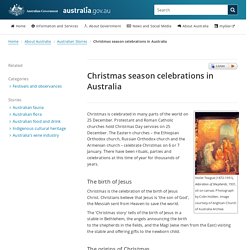 Photograph by Colin Holden. Image courtesy of Anglican Church of Australia Archive. Christmas is celebrated in many parts of the world on 25 December. Protestant and Roman Catholic churches hold Christmas Day services on 25 December. Festivals in Australia. Perth Festival event at Cottesloe Beach. 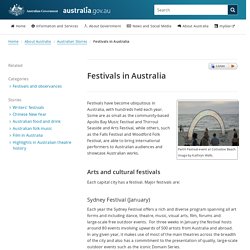 Image by Kathryn Wells. Festivals have become ubiquitous in Australia, with hundreds held each year. Some are as small as the community-based Apollo Bay Music Festival and Thirroul Seaside and Arts Festival, while others, such as the Falls Festival and Woodford Folk Festival, are able to bring international performers to Australian audiences and showcase Australian works. Arts and cultural festivals Each capital city has a festival. Sydney Festival (January) Each year the Sydney Festival offers a rich and diverse program spanning all art forms and including dance, theatre, music, visual arts, film, forums and large-scale free outdoor events. National Multicultural Festival, Canberra (February) The National Multicultural Festival is held over four days and features the very best in local, national and international music, dance, food and creative arts. Perth International Arts Festival (February–March) Adelaide Festival of Arts (March) WOMADelaide.

NSW_public_holidays. Section 4 of the Public Holidays Act 2010 (the Act) declares the standard public holidays that apply in NSW. 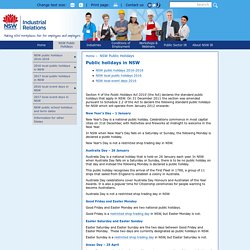 On 31 December 2011 the section was amended pursuant to Schedule 2.2 of the Act to declare the following standard public holidays for NSW which will operate from January 2012 onwards: New Year’s Day – 1 January New Year’s Day is a national public holiday. Celebrations commence in most capital cities on 31st December, with festivities and fireworks at midnight to welcome in the New Year. In NSW when New Year’s Day falls on a Saturday or Sunday, the following Monday is declared a public holiday. New Year’s Day is not a restricted shop trading day in NSW. National symbols. Australian National Flag and Other Flags of Australia. Australian National Flag The National Flag of Australia contains three elements: The British Union Jack on a blue field - reflecting the historical origins of the Australian flag, The Southern Cross - reflecting Australia's geographic position in the Southern Hemisphere, and A seven pointed star - representing the Federation of six states, with an additional point to represent the territories collectively. 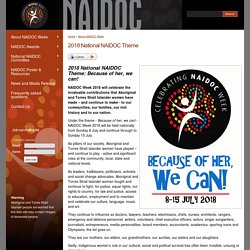 NAIDOC Week 2018 will celebrate the invaluable contributions that Aboriginal and Torres Strait Islander women have made – and continue to make - to our communities, our families, our rich history and to our nation. Under the theme - Because of her, we can! - NAIDOC Week 2018 will be held nationally from Sunday 8 July and continue through to Sunday 15 July. Celebrate National Reconciliation Week. 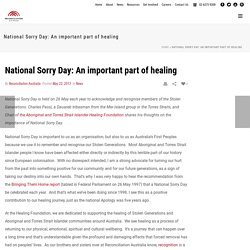 Charles Passi, a Dauareb tribesman from the Mer Island group in the Torres Straits, and Chair of the Aboriginal and Torres Strait Islander Healing Foundation shares his thoughts on the importance of National Sorry Day. National Sorry Day is important to us as an organisation, but also to us as Australia’s First Peoples because we use it to remember and recognise our Stolen Generations. Most Aboriginal and Torres Strait Islander people I know have been affected either directly or indirectly by this terrible part of our history since European colonisation. With no disrespect intended, I am a strong advocate for turning our hurt from the past into something positive for our community and for our future generations, as a sign of taking our destiny into our own hands. So that’s why National Sorry Day isn’t just another one of ‘those days’ for me. Au Esoau!

Harmony Day – Everyone belongs. The Anzac Day Tradition. During the 1920s Anzac Day became established as a national day of commemoration for the more than 60,000 Australians who had died during the war. 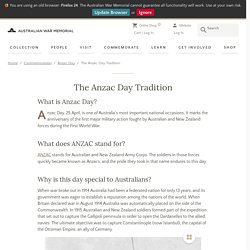 In 1927, for the first time, every state observed some form of public holiday on Anzac Day. By the mid-1930s all the rituals we now associate with the day – dawn vigils, marches, memorial services, reunions, two-up games – were firmly established as part of Anzac Day culture. Later, Anzac Day also served to commemorate the lives of Australians who died in the Second World War, and in subsequent years the meaning of the day has been further broadened to include those who lost their lives in all the military and peacekeeping operations in which Australia has been involved. Anzac Day was first commemorated at the Memorial in 1942. At the time, government orders prohibited large public gatherings in case of a Japanese air attack, so it was a small occasion with neither a march nor a memorial service. Home – Australia Day. Heritage. Learning areas History Year 3. 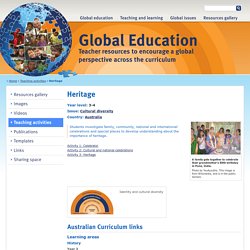