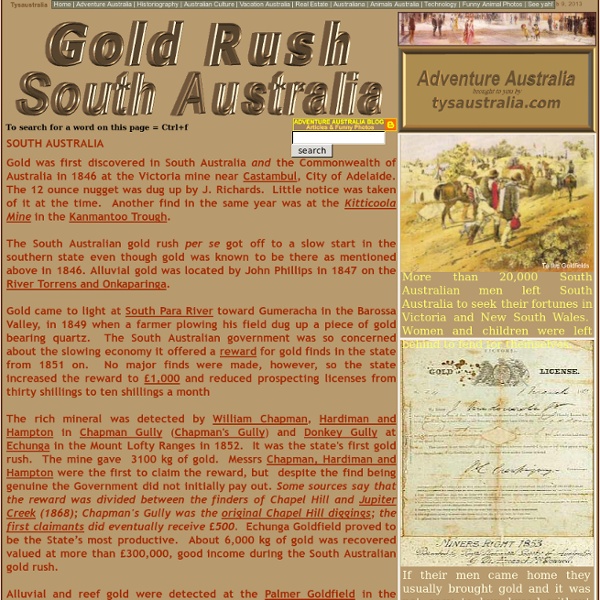 Australian Gold Rush: 1850 The bonanza in California was only the beginning. An Australian named Edward Hammond Hargraves, who had been there, was certain that the same geological features were to be found in his own country. Returning on the boat from California late in 1850, he predicted that he would find gold within a week. 'There's no gold in the country you're going to and if there is, that darned Queen of yours won't let you touch it,' a fellow passenger told him. 'There's as much gold in the country I'm going to as there is in California,' snapped Hargraves, 'and Her Gracious Majesty the Queen, God bless her, will appoint me one of her Gold Commissioners.' The news of the fresh gold field reached England, along with the first gold, aboard the Thomas Arbuthnot. In fact, Hargraves had touched only the fringe of Australian gold. Other secondary rushes followed.

Gold rush Sailing to California at the beginning of the Gold Rush A gold rush is a period of feverish migration of workers to an area that has had a dramatic discovery of gold deposits. Major gold rushes took place in the 19th century in Australia, New Zealand, Brazil, Canada, South Africa, and the United States, while smaller gold rushes took place elsewhere. In the 19th and early 20th centuries, there were several major gold rushes. The permanent wealth that resulted was distributed widely because of reduced migration costs and low barriers to entry. While gold mining itself was unprofitable for most diggers and mine owners, some people made large fortunes, and the merchants and transportation facilities made large profits. Gold rushes were typically marked by a general buoyant feeling of a "free for all" in income mobility, in which any single individual might become abundantly wealthy almost instantly, as expressed in the California Dream. Life cycle of a gold rush[edit] Australia[edit]

Australian gold rushes An Australian gold diggings circa 1855 After the California gold rush began in 1848, causing many people to leave Australia for California to look for gold there, the New South Wales government rethought its position, and sought approval from the Colonial Office in England to allow the exploitation of the mineral resources and also offered rewards for the finding of payable gold.[2] The first gold rush in Australia began in May 1851 after prospector Edward Hargraves claimed to have discovered payable gold near Bathurst, at a site he called Ophir.[3] Hargraves had been to the Californian goldfields and had learned new gold prospecting techniques such as panning and cradling. Hargraves was offered a reward by both the Colony of New South Wales and the Colony of Victoria. The Australian gold rushes changed the aboriginal view of Australia. When the rush began at Ballarat, diggers discovered it was a prosperous goldfield. The gold rushes caused a huge influx of people from overseas. F.

Gold rush history - Australia's Golden Outback The Western Australian gold rush began with the first discovery of gold in the late 1890s. News of the gold spread as fast as the region’s wildfires and soon gold prospectors were arriving to seek their fortune and set up gold rush towns in the dusty landscapes of the Kalgoorlie, Goldfields and Murchison regions. They came slowly at first, but as the finds grew so too did the population. Lonely clusters of tents and rough bough sheds were soon transformed into booming Western Australian gold rush towns. Grand hotels lined the main streets and bustling town centres soon boasted butchers, bakers, schools and churches. And with the completion of the Golden Pipeline, this arid region was given a constant supply of fresh water. Many of the original townships remain and though the populations are not as huge, the character buildings and museums provide a fascinating glimpse into the wild and colourful spirit of the gold rush era.

Chinese at the Australian Goldfields Chinese at the Australian Goldfields At the time that news about the Australian goldrush reached China in 1853, the country had been suffering from years of war and famine. In order to raise money for the fare to Australia, a man would take a loan from a local trader, agreeing to make regular repayments. His wife and children stayed behind, and worked for the trader if the man was unable to repay the money he had borrowed. A village in China When the Chinese arrived at the goldfields, they stayed together in large teams with a head man in charge. There was ignorance about Chinese customs and culture, and the Chinese seemed very strange and different to the European diggers. In an attempt to limit the number of Chinese at the goldfields, a law was passed in 1885 that any Chinese person entering Victoria would pay ten pounds tax, and one pound for a protection fee, the right to mine and live in the colony. Some Chinese returned home after the gold rush, but many stayed here.

Australian gold rush timeline, HSIE, Discovering gold, Gold! Year 6, NSW | Online Education Home Schooling Skwirk Australia The first major mineral discovery - gold - was a watershed (a turning point or landmark) for Australian society. The initial stages of the gold rush were responsible for tremendous changes in the community, bringing Australia's first great waves of immigration from countries other than England and Ireland. Ambitious prospectors from Asia, Europe and America made the trek to the goldfields of Ballarat and Bendigo in Victoria, and Bathurst in New South Wales, in the hope of striking it rich. This influx of people brought many social changes, including an increase in racial tensions with the persecution of some groups, notably the Chinese. Government Surveyor James McBrien discovers traces of gold in the Fish River, east of Bathurst. Explorer and geologist Paul de Strzelecki discovers small amounts of gold in silicate near Hartley in the Blue Mountains. The 1840s Early gold discoveries were greeted with fear. William Campbell finds gold on his sheep run in Strathlodden, Victoria, in 1840.

GoldRush Gold! Gold Rush in Australia Gold is found in rocks and in the ground. People came to look for gold in Australia. It was called the Gold Rush. It was a hard life digging for gold. Gold is a soft, yellow precious metal. Gold in California and Australia In 1851, during the time that there was a gold rush in California USA, a gold rush began in Australia. However, in Australia, it was not unusual for gold nuggets, some very large, to be found. The California Goldfields. The Largest Australian Nuggets In October 1872 Holtermann's Nugget was found. The Australian gold rush begins Small amounts of gold were found in New South Wales in the early days of the colony, but the authorities hushed it up. Within a week there were over 400 people digging there for gold, and by June there were 2000. Between 1851 and 1861, Australia produced one third of the world's gold. The Victorian goldfields In August 1851, part of New South Wales was made a separate colony, and was named Victoria after the Queen.

Ancient Australian History After a long trek on foot or horseback by coach or dray from Sydney or Melbourne, new miners were thankful and excited when they reached the goldfields. On the larger fields they saw hundreds or even thousands of tents clustered around creeks or near the site of earlier discoveries. There were horses and bullocks, wagons and carts and everywhere people bustling around, digging, panning, washing gravel, moving mounds of dirt or gently rocking their cradles from side to side. New miners soon realised, however, that the goldfields were not as attractive to live in as they looked from a distance. At Bendigo, for example, up to 40,000 people lived close together in tents. Miners worked hard day after day and often could afford neither the time nor the money to buy good food. The first diggers lived in tents which they brought with them to the goldfields. As well as diggers’ tents or huts, there were many other buildings on the goldfields.