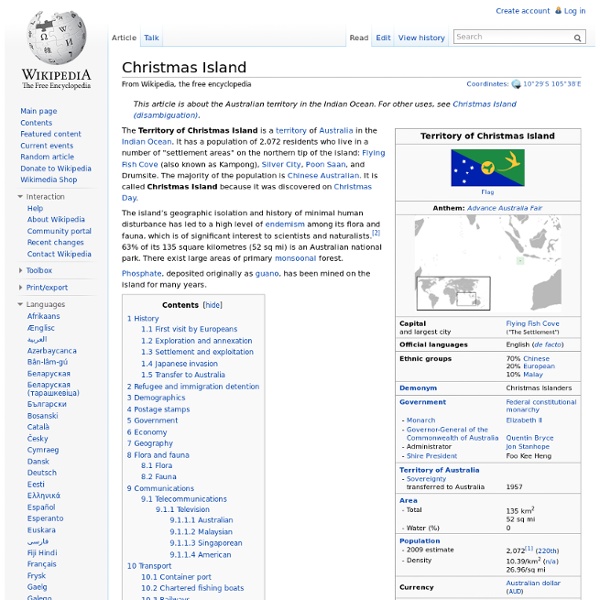 Coordinates: The Territory of Christmas Island is a territory of Australia in the Indian Ocean. It has a population of 2,072 residents who live in a number of "Settlement areas" on the northern tip of the island: Flying Fish Cove (also known as Kampong), Silver City, Poon Saan, and Drumsite. The island's geographic isolation and history of minimal human disturbance has led to a high level of endemism among its flora and fauna, which is of significant interest to scientists and naturalists.[2] 63% of its 135 square kilometres (52 sq mi) is an Australian national park. Phosphate, deposited originally as guano, has been mined on the island for many years. History[edit] First visit by Europeans[edit] Daniel Beekman made the next recorded visit, chronicled in his 1718 book, A Voyage to and from the Island of Borneo, in the East Indies. Exploration and annexation[edit] Poon Saan shops The first attempt at exploring the island was in 1857 by the crew of the Amethyst. Japanese invasion[edit]

Cocos From Wikipedia, the free encyclopedia Cocos may refer to: Australian Capital Territory Australian Capital Territory (abbreviated ACT) (formerly, "The Territory for the Seat of Government" and, later, the "Federal Capital Territory") is a territory in the south east of Australia, enclaved within New South Wales. It is the smallest self-governing internal territory in Australia. The only city and by far the most populous community is Canberra, the capital city of Australia. The need for a National Territory was flagged by colonial delegates during the Federation conventions of the late 19th century. Section 125 of the Australian Constitution provided that, following Federation in 1901, land would be ceded freely to the new Federal Government. The territory was transferred to the Commonwealth by the state of New South Wales in 1911, two years prior to the naming of Canberra as the National Capital in 1913. Geography[edit] Location of the ACT and Jervis Bay There are a large range of mountains, rivers and creeks in the Namadgi National Park. Climate[edit] Geology[edit] ACT sign

Lord Howe Island Lord Howe Island (/ˈhaʊ/, local /ˈhæɔː/) (formerly Lord Howe's Island) is an irregularly crescent-shaped volcanic remnant in the Tasman Sea between Australia and New Zealand, 600 kilometres (370 mi) directly east of mainland Port Macquarie, and about 900 kilometres (560 mi) from Norfolk Island. The island is about 10 km long and between 2.0 km and 0.3 km wide with an area of 14.55 km2, "of which only 398 hectares is in the lowland settled area".[6] Along the west coast there is a sandy semi-enclosed sheltered coral reef lagoon. Most of the population lives in the north, while the south is dominated by forested hills rising to the highest point on the island, Mount Gower (875 m or 2,871 ft).[7] The Lord Howe Island Group of islands[7] comprises 28 islands, islets and rocks. Apart from Lord Howe Island itself the most notable of these is the volcanic and uninhabited Ball's Pyramid about 23 km to the south-east. History[edit] 1788–1834: First European visits[edit] 1890–present[edit]

Cocos (Keeling) Islands Cocos Location of the Cocos Islands in the Indian Ocean. The Territory of the Cocos (Keeling) Islands, also called Cocos Islands and Keeling Islands, is a territory of Australia, located in the Indian Ocean, southwest of Christmas Island and approximately midway between Australia and Sri Lanka. The Cocos (Keeling) Islands consist of two flat, low-lying coral atolls with an area of 14.2 square kilometres (5.5 sq mi), 26 kilometres (16 mi) of coastline, a highest elevation of 5 metres (16 ft) and thickly covered with coconut palms and other vegetation. The climate is pleasant, moderated by the southeast trade winds for about nine months of the year and with moderate rainfall. Cyclones may occur in the early months of the year. North Keeling Island is an atoll consisting of just one C-shaped island, a nearly closed atoll ring with a small opening into the lagoon, about 50 metres (160 ft) wide, on the east side. Cocos (Keeling) Islands. 1889 map of South Keeling Islands.

Norfolk Island Airport Norfolk Island Airport (IATA: NLK, ICAO: YSNF) is the only airport on Norfolk Island, an external territory of Australia. The island is located in the Pacific Ocean between Australia, New Zealand, and New Caledonia. The airport is operated by the Administration of Norfolk Island.[2] History[edit] The airstrip was built during World War II as a defensive measure to counter feared Japanese operations in the South Pacific. Initially used for bomber patrols and for a transport service to Bougainville Island, the airfield was never used as a major base and became a stopover for aircraft travelling between Australia, New Caledonia, New Zealand and the Solomon Islands. Light aircraft transit[edit] Norfolk Island is an important transit and refueling point for light aircraft flying between Australia, New Zealand, and the Pacific Islands. Facilities[edit] The airport resides at an elevation of 371 ft (113 m) above sea level. Airlines and destinations[edit] Statistics[edit] See also[edit]

States and territories of Australia All states and two of the three internal territories have their own parliaments and administer themselves; all remaining territories are administered by the federal government, but with Norfolk Island having some degree of self-government. Map showing the creation of the colonies/states and mainland territories. States and territories[edit] See also: List of State Codes Australia has had three now-defunct territories in its history: From 1926 to 1931, the Northern Territory was divided into Central Australia and North Australia, with the border at the 20th parallel of latitude. Background and overview[edit] The states originated as separate British colonies prior to Federation (in 1901). Legislative powers of the States are protected by the Australian constitution, and under the principle of federalism Commonwealth legislation only applies to the states where permitted by the constitution. Jervis Bay Territory is unique in being the only non-self-governing internal territory. See also[edit]

Coral Sea Islands Map of the Coral Sea Islands Map of the Coral Sea Islands Territory History[edit] The Coral Sea Islands were first charted in 1803; in the 1870 and 1880s the islands were mined for guano but the absence of a permanent supply of fresh water prevented long-term habitation.[1] The territory was created in 1969 by the Coral Sea Islands Act (before, the area was considered part of Queensland) and extended in 1997 to include Elizabeth and Middleton Reefs nearly 800 km further South, already in the Tasman Sea. The two latter reefs are much closer to Lord Howe Island, New South Wales (about 150 km) than to the southernmost island of the rest of the territory, Cato Island. Geography[edit] There are about 30 separate reefs and atolls, twelve being wholly submerged or drying only during low tide, and 18 others with a total of about 51 islets and cays (18 alone on the atoll Lihou Reef), some of which are vegetated. Northwestern Group[edit] Mellish Reef[edit] Southeasterly Group[edit] Extreme South[edit]

Norfolk Island Norfolk Island ( i/ˈnɔrfək ˈaɪlənd/; Norfuk: Norf'k Ailen[4]) is a small island in the Pacific Ocean located between Australia, New Zealand and New Caledonia, 1,412 kilometres (877 mi) directly east of mainland Australia's Evans Head, and about 900 kilometres (560 mi) from Lord Howe Island. The island is part of the Commonwealth of Australia, but it enjoys a large degree of self-governance. Originally settled by East Polynesians, Norfolk Island was colonised by Great Britain as part of its settlement of Australia in 1788. The evergreen Norfolk Island pine is a symbol of the island and thus pictured on its flag (see illustration). History[edit] Early history[edit] Norfolk Island was first settled by East Polynesian seafarers either from the Kermadec Islands north of New Zealand or from the North Island of New Zealand. Sir John Call argued the advantages of Norfolk Island in that it was uninhabited and that flax grew there. Nineteenth century[edit] Post-nineteenth century[edit] WikiMiniAtlas

Heard Island and McDonald Islands The Heard Island and McDonald Islands[1] (abbreviated as HIMI[2]) are an Australian external territory and volcanic group of barren Antarctic islands, about two-thirds of the way from Madagascar to Antarctica. The group's overall size is 372 square kilometres (144 sq mi) in area and it has 101.9 km (63 mi) of coastline. Discovered in the mid-19th century, they have been territories of Australia since 1947 and contain the only two active volcanoes in Australian territory, the summit of one of which, Mawson Peak, is higher than any mountain on the Australian mainland. They lie on the Kerguelen Plateau in the Indian Ocean. Geography[edit] Map of Heard and McDonald Islands[1] Heard Island, by far the largest of the group, is a 368-square-kilometre (142 sq mi) bleak and mountainous island located at WikiMiniAtlas 53°02′20″S 72°36′04″E﻿ / ﻿53.03889°S 72.60111°E﻿ / -53.03889; 72.60111. Heard Island and the McDonald Islands have no ports or harbours; ships must anchor offshore. Climate[edit]