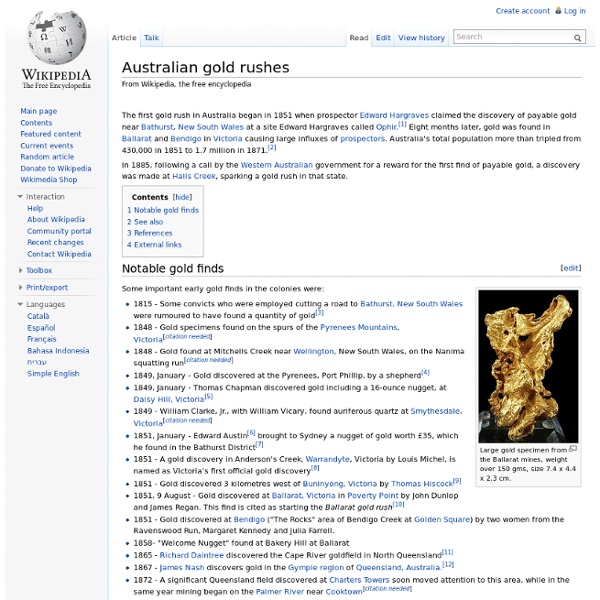 An Australian gold diggings circa 1855 After the California gold rush began in 1848, causing many people to leave Australia for California to look for gold there, the New South Wales government rethought its position, and sought approval from the Colonial Office in England to allow the exploitation of the mineral resources and also offered rewards for the finding of payable gold.[2] The first gold rush in Australia began in May 1851 after prospector Edward Hargraves claimed to have discovered payable gold near Bathurst, at a site he called Ophir.[3] Hargraves had been to the Californian goldfields and had learned new gold prospecting techniques such as panning and cradling. Hargraves was offered a reward by both the Colony of New South Wales and the Colony of Victoria. Before the end of the year, the gold rush had spread to many other parts of the state where gold had been found, not just to the west, but also to the south and north of Sydney.[4] Pre-rush gold finds[edit] F. At E.

Gold Rush in Australia! The transportation of convicts to Australia was phased out between 1840 and 1868. By 1860, the continent of Australia had been divided into FIVE separate colonies (not officially states yet, mate but seperation away from New South Wales), each not seeing eye-to-eye and exhibiting more loyalty to London to each other. A major force within the colonies was the “squatocracy” – the rich officers and settlers a.k.a. opportunists who had followed the explorers into fertile hinterlands. They simply laid claim to or “squatted” upon enormous tracts of land, often 20,000 acres and more.

Australian Gold, History & Culture Info - Historic Gold Rush Village Mogo South Coast NSW Australia The murderous Clarke brothers were worse than any of the other Australian bushrangers, outdoing the notorious Ned Kelly, Ben Hall, Captain Lightning, Frank Gardiner and Thunderbolt. The Clarke and Connell gang became known as "The Bloodiest Bushrangers". Jack Clarke, an Irish shoemaker had been transported for seven years in the "Morley". He arrived in 1826 and is descirbed as being of medium build and 5ft 51/4 tall with grey eyes. He arrived in the Braidwood district as one of the assigned convicts brought in by Major Elrington in 1827. Eureka! The rush for gold The gold rushes and the diggers who worked the goldfields are etched into Australian folklore. Follow the story of the people who sought the glittering prize. Edward Hammond Hargraves is credited with finding the first payable goldfields at Ophir, near Bathurst, New South Wales, on 12 February 1851. News of gold spread quickly around the world and in 1852 alone, 370,000 immigrants arrived in Australia. By 1871, the national population had trebled to 1.7 million.

Australian Gold Rush In fact they only got worse. A powerfully disruptive hysteria seemed to grip the State along with the rest of the country. Farmhands simply left their employers with harvests they could no longer reap and thousands of workers fled Melbourne leaving empty industries in their wake.

The Australian gold rush JCF Johnson, A Game of Euchre, col. wood engraving, Australasian Sketcher Supplement [Melbourne], 25 December, 1876. Image courtesy of the : nla.pic-an8927787. The gold rushes of the nineteenth century and the lives of those who worked the goldfields - known as '' - are etched into our national . There is no doubt that the gold rushes had a huge effect on the Australian economy and our development as a nation. It is also true to say that those heady times had a profound impact on the national psyche. Australian Gold Rush: 1850 The bonanza in California was only the beginning. An Australian named Edward Hammond Hargraves, who had been there, was certain that the same geological features were to be found in his own country. Returning on the boat from California late in 1850, he predicted that he would find gold within a week. 'There's no gold in the country you're going to and if there is, that darned Queen of yours won't let you touch it,' a fellow passenger told him.

Bushranger History[edit] More than 2000 bushrangers are believed to have roamed the Australian countryside, beginning with the convict bolters and drawing to a close after Ned Kelly's last stand at Glenrowan.[3] 1850s: gold rush era[edit] The bushrangers' heyday was the Gold Rush years of the 1850s and 1860s as the discovery of gold gave bushrangers access to great wealth that was portable and easily converted to cash. Their task was assisted by the isolated location of the goldfields and a police force decimated by troopers abandoning their duties to join the gold rush.[3] George Melville was hanged in front of a large crowd for robbing the McIvor gold escort near Castlemaine in 1853.[3]

Life on the Australian Goldfields On hearing that there was gold to be found, thousands of people left their homes and jobs and set off to the diggings to find their fortune. At the start of the gold rush, there were no roads to the goldfields, and no shops or houses there. People had to carry everything they needed. They travelled by horse or bullock, or by walking with a wheelbarrow loaded with possessions.