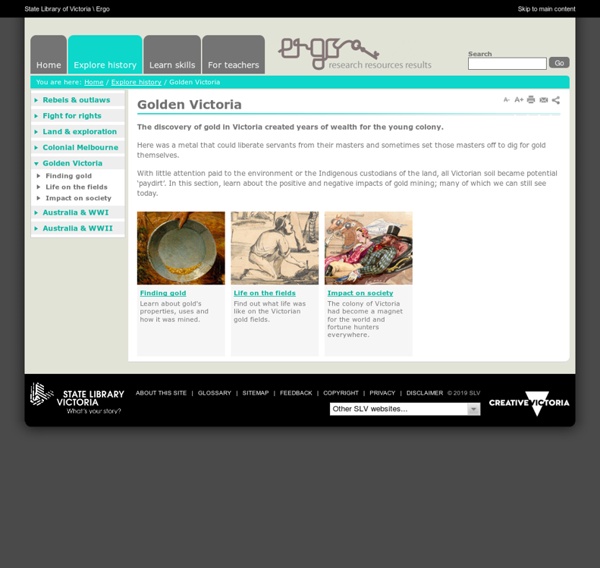 Why did the great journey's of exploration occur? In this part of your course you are investigating some of the great explorations in world history. During the fifteenth and sixteenth centuries there was a great outbreak of exploration from Europe to unknown areas of the world. Why did this happen? The activities in this unit will help you to answer these questions about an explorer that you choose to research for your final presentation. But before you choose your own explorer to investigate, let’s explore the adventures of a very important explorer in world history – Christopher Columbus! Download the Explorer Profiler Questions as Word Doc

Everyday life In 19th century Melbourne free land was scarce, housing was a problem, and when times got tough, people turned to alcohol. Those who watched the city grow tell the story of how the streets were named, when the first brewery appeared, and how a woman got by in a man's world. The witty observations of an Irish journalist tell the real story of life in Port Phillip. Hard times and economic woes made the lure of alcohol all too tempting for Melbourne's common folk. After some initial problems, Melbourne's city grid became an iconic feature of a rapidly growing town. Melbourne's population in the 1800s reflected the city's growth as a bustling metropolis. Melbourne's city street names link directly to the story of colonial life in Port Phillip. Almost since their arrival, settlers had felt strongly that Port Phillip deserved to be a separate colony. Female convicts and free settlers were a small but important part of Port Phillip's development.

Propaganda Australian propaganda was designed to maintain public anger about German atrocities and idealise Australian soldiers. Germany’s invasion of Belgium meant that German forces were easily portrayed as the aggressors in the conflict. inhuman and monstrous. One month after the landing at Gallipoli, the English passenger ship RMS Lusitania - a ship almost the size of the Titanic - was sunk by German submarines. 1,198 passengers and crew were killed. motif in Allied propaganda. Norman Lindsay, artist and author of the much-loved children’s book The Magic Pudding, created some of the most striking Australian propaganda. Propaganda also marks journalism at the time. bias in their accounts of Allied actions. Deliberately or otherwise, in the age of mass literacy, the lies, exaggerations and errors of the battlefield were turned into official communiqués and elaborated upon in correspondents’ dispatches. Williams, J F 1999, Anzacs, the media and the great war, UNSW Press, Sydney, NSW Victoria Cross

Governor Lachlan Macquarie - Scots and Australia Lachlan Macquarie is known as ‘The Father of Australia’. As Governor of New South Wales from 1810 to 1822, he brought reform to the convict colony and began an ambitious building programme in Sydney. Lachlan was born on 31 January 1762 on the small island of Ulva in the Inner Hebrides. Lachlan was related to the last chieftain of the clan Macquarie and to the chieftain of Lochbuy in Mull. Lachlan embarked on a military career, first as an ensign in the ‘Royal Highland Emigrants’. By 1808 Lachlan Macquarie commanded the 73rd Regiment of Foot, the Black Watch. Captain William Bligh had famously lost command of his ship when his crew mutinied on The Bounty in April 1789. The New South Wales Corps were recalled to England to be replaced by the 73rd Regiment of Foot under Macquarie. Elizabeth Macquarie kept a journal recording their voyage over the next seven months. Sunday 4th June. August. Elizabeth Macquarie, 1809 When the Macquaries left Sydney the harbour was lined with:

Home | AC History Units Jerilderie Letter The document known as the Jerilderie Letter was dictated by famous Australian bushranger Ned Kelly to fellow Kelly Gang member Joe Byrne in 1879. It is one of only two original Kelly documents known to have survived.[1] Ned Kelly the day before his execution by hanging in November 1880. The Jerilderie Letter is a 56-page document of approximately 8,000 words. In the letter Kelly tries to justify his actions, including the killing of three policemen in October 1878. It is a longer and more detailed version of the Cameron/Euroa Letter which Kelly sent to a member of the Victorian Legislative Assembly and the police in December 1878. Two copies were made of Ned Kelly's letter, one by publican John Hanlon and one by a government clerk. Ned Kelly and the Kelly Gang[edit] Cameron/Euroa Letter[edit] On 14 November 1878, the day before the members of the Kelly Gang were outlawed, a Victorian parliamentarian criticised the progress of the police hunt for the gang. History[edit] Description[edit]

Curriculum connections - Vrroom Australian History The collection of records in Vrroom offers a window into key events and significant themes of 20th-century Australian History – events such as the birth of the Commonwealth of Australia in 1901 and themes relating to people, power and politics, immigration,national identity and environmental issues. In 2012 Vrroom is linking grouped primary sources with the Australian Curriculum: History. See Traversing Antarctica, the Australian experience. Vrroom can help teachers and students find archival records relating to nine broad research topics. Civics and Citizenship Vrroom is an excellent resource for secondary students studying Civics and Citizenship. What is citizenship? To study Civics and Citizenship, you might look at governance processes: You might explore government policy, for example: Or you might examine how the public interacts with the government: You could also explore Civics and Citizenship through topics such as: English Some records advance an argument: Science

Convict Creations; the Hidden Story of Australia's Missing Links 1 Historical background Recognising Aboriginal and Torres Strait Islander Peoples in the Constitution: Report of the Expert Panel Millions of non-indigenous Australians have joined with us in the search for a better relationship based on equity and justice. Australians at every level of our society have put up their hands to be counted as supporters of a nation that holds as its core value a society based on mutual respect, tolerance and justice. ... I am convinced that true reconciliation that is not based upon truth will leave us as a diminished nation. And I ... am convinced that such reconciliation is possible. Patrick Dodson1 It is a question of the country's ability to deal with history, because history is not something that dwells in years gone by; it is something that dwells among us now and it prescribes the way in which we will behave in the future. Noel Pearson2 1.1 The history of the Australian Constitution During the 1890s, a series of conferences were held to discuss federation. 1.4 'White Australia'

1840 – 1900 | Australia's migration history timeline | NSW Migration Heritage Centre Circular Quay, Charles Percy Pickering, 1871. Courtesy State Library of New South Wales By 1869, there were six colonies in Australia – New South Wales, Tasmania, Western Australia, South Australia, Victoria and Queensland – all settled by British people. These separate colonies all had their own governors, parliaments and systems of government reporting to Britain. As the interior was explored and mapped, squatters and free settlers followed and Aboriginal people were pushed from their homelands. Governments wanted to protect Aboriginal people from settler violence. The discovery of gold sent a shock wave through Colonial Australia. Chinese in Lambing Flat riots, December, 1860. Chinamen at work on the gold fields. Immigrant ships brought thousands of people keen to try their luck at the diggings. The Chinese diggers moved from goldfield to goldfield within New South Wales and across the border. Samuel Sweet, Overland telegraph party, J.A.G.