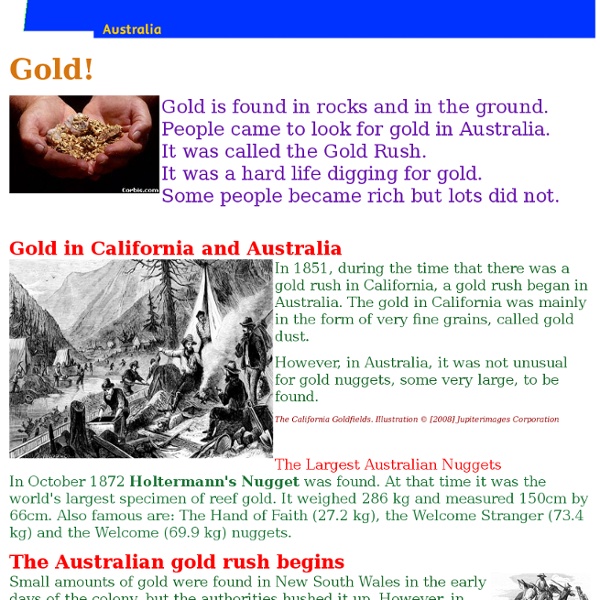 Gold Rush in Australia Gold is found in rocks and in the ground. People came to look for gold in Australia. It was called the Gold Rush. Gold is a soft, yellow precious metal. Gold in California and Australia In 1851, during the time that there was a gold rush in California USA, a gold rush began in Australia. However, in Australia, it was not unusual for gold nuggets, some very large, to be found. The California Goldfields. The Largest Australian Nuggets In October 1872 Holtermann's Nugget was found. The Australian gold rush begins Small amounts of gold were found in New South Wales in the early days of the colony, but the authorities hushed it up. Within a week there were over 400 people digging there for gold, and by June there were 2000. Between 1851 and 1861, Australia produced one third of the world's gold. The Victorian goldfields In August 1851, part of New South Wales was made a separate colony, and was named Victoria after the Queen. Back to Australia index Related:  Goldrush Australia

Gold rush Sailing to California at the beginning of the Gold Rush A gold rush is a period of feverish migration of workers to an area that has had a dramatic discovery of gold deposits. Major gold rushes took place in the 19th century in Australia, New Zealand, Brazil, Canada, South Africa, and the United States, while smaller gold rushes took place elsewhere. In the 19th and early 20th centuries, there were several major gold rushes. The permanent wealth that resulted was distributed widely because of reduced migration costs and low barriers to entry. Gold rushes were typically marked by a general buoyant feeling of a "free for all" in income mobility, in which any single individual might become abundantly wealthy almost instantly, as expressed in the California Dream. Gold rushes helped spur a huge immigration that often led to permanent settlement of new regions and define a significant part of the culture of the Australian and North American frontiers. Life cycle of a gold rush[edit]

Goldealers Stand Proud As Pioneers Of The UK Gold Standard (PRWEB UK) 13 May 2013 As the price of gold has risen enormously over the last few years, The UK gold trade has recently seen a burst of merchants offering cash for gold. However, this flurry of new services has seen a steep increase in deceitful activity, including misquoting prices and the illegal fencing of stolen goods. After months of collaboration between the British Jewellers association and various different organisations, including the Surrey Police, the National Pawnbrokers Association and the National Association of Pawnbrokers, the Gold Standard was officially introduced during April 2012. Since its launch, the Gold Standard has received accreditation from several sources, including the Association of Chief Police Officers and the Trading Standards Institute. Goldealers were quick to sign up as a Gold Standard registered retailer, paving the way for other merchants as an early adopter of the practice. About Goldealers:

Goldealers Stand Proud As Pioneers Of The UK Gold Standard Trusted gold buyers Goldealers are delighted to see more UK based traders signing up to the voluntary gold standard initiative in an effort to improve conditions surrounding the UK gold trade. (PRWEB UK) 13 May 2013 As the price of gold has risen enormously over the last few years, The UK gold trade has recently seen a burst of merchants offering cash for gold. After months of collaboration between the British Jewellers association and various different organisations, including the Surrey Police, the National Pawnbrokers Association and the National Association of Pawnbrokers, the Gold Standard was officially introduced during April 2012. Since its launch, the Gold Standard has received accreditation from several sources, including the Association of Chief Police Officers and the Trading Standards Institute. Goldealers were quick to sign up as a Gold Standard registered retailer, paving the way for other merchants as an early adopter of the practice. About Goldealers: Advertisement

Sovereign Hill The gold diggings Set in the Australian 1850s, the complex is located on a 25-hectare site that is linked to the richest alluvial gold rush in the world. The site comprises over 60 historically recreated buildings, with costumed staff and volunteers, who are able to answer questions and will pose for photos. The recreation is completed with antiques, artwork, books and papers, machinery, livestock and animals, carriages, and devices all appropriate to the era2. History[edit] Second largest gold nugget in the world—was also found in Ballarat in the Red Hill mine which is recreated in Sovereign Hill. The idea of Sovereign Hill was floated in Ballarat in the 1960s, as a way to preserve historic buildings, and to recreate the gold diggings that made the city. Main street is a loose reconstruction of Main Street, Ballarat East which was once the settlement's main street, consisting of timber buildings. Attractions[edit] A bakery and other assorted shops on main street. References[edit]

Eureka Stockade The Eureka Flag based on the constellation of the Southern Cross. Image courtesy of the The , which is often referred to as the 'Eureka Stockade', is a key event in the development of Australian democracy and Australian identity, with some people arguing that Australian democracy was born at Eureka' (Clive Evatt). In addition, the principles of mateship, seen to be adapted by the gold diggers, and the term digger' was later adopted by the ANZAC soldiers in World War I. The rebellion came about because the goldfield workers (known as 'diggers') opposed the government miners' licences. The licences were a simple way for the government to tax the diggers. Population of the goldfields The population of the Victorian goldfields peaked in 1858 at 150,000. Between 1851 and 1860, an estimated 300,000 people came to Australian colonies from England and Wales, with another 100,000 from Scotland and 84,000 from Ireland. 1854 - the year of the rebellion The Social Order Notice. The Eureka Stockade

The Difference Between High Street And Online Gold Traders Did you know that there’s probably a small fortune hidden away in your drawers? I’m talking about your gold of course, a highly sought-after commodity that in its purest form represents wealth. The value of gold is incredibly volatile. It’s exact worth changes by the minute, and the worth of your jewellery today may be completely different to what it’s worth tomorrow. One thing is for certain though; gold’s value has risen dramatically over the last two decades. This is why we’ve seen a rise in gold dealers and services offering cash for gold. Most people understand their gold is valuable, but don’t quite know what to do with it. High Street Jewellers With gold prices on the rise, many jewellers and pawnbrokers have begun offering gold evaluation services that allow you to have your gold weighed and priced whilst you wait in the store. This is probably the biggest advantage of trading within an actual store. Online Traders The risk here comes from sending the gold. Author Bio: Google+

142.84 USD/BTC The chart below is the price change over time. The yellow line is the price [USD / mBTC] at which actual trades were made. Green and red areas near the yellow line show you maximum and minimum price. Bars in the background represent volume (that is, how many coins were traded during that time) enumerated in [mBTC]. Below is the cumulative depth chart. About these bars going up and down (if there are any at the moment). Australian Gold Rush: 1850 The bonanza in California was only the beginning. An Australian named Edward Hammond Hargraves, who had been there, was certain that the same geological features were to be found in his own country. Returning on the boat from California late in 1850, he predicted that he would find gold within a week. 'There's no gold in the country you're going to and if there is, that darned Queen of yours won't let you touch it,' a fellow passenger told him. The news of the fresh gold field reached England, along with the first gold, aboard the Thomas Arbuthnot. In fact, Hargraves had touched only the fringe of Australian gold. Other secondary rushes followed.