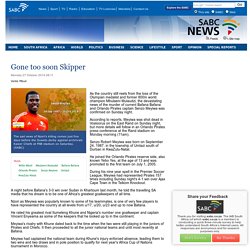 (SABC) As the country still reels from the loss of the Olympian medalist and former 800m world champion Mbulaeni Mulaudzi, the devastating news of the murder of current Bafana Bafana and Orlando Pirates captain Senzo Meyiwa was confirmed on Sunday night. According to reports, Meyiwa was shot dead in Vosloorus on the East Rand on Sunday night, but more details will follow in an Orlando Pirates press conference at the Rand stadium on Monday morning (11am). Senzo Robert Meyiwa was born on September 24, 1987, in the township of Umlazi south of Durban in KwaZulu-Natal. He joined the Orlando Pirates reserve side, also known Yebo Yes, at the age of 13 and was promoted to the first team on July 1, 2005.

Meyiwa's rivalry with Khune dated back to the time when the two were still playing in the juniors of Pirates and Chiefs. Meyiwas mother rushed to hospital:Monday 27 October 2014. Senzo Meyiwa's family is struggling to come to terms with his death(REUTERS) Orlando Pirates' captain Senzo Meyiwa's mother has been rushed to hospital as she's failing to come to terms with the untimely passing of her son. 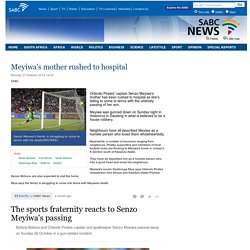 Meyiwa was gunned down on Sunday night in Vosloorus in Gauteng in what is believed to be a house robbery. Neighbours have all described Meyiwa as a humble person who loved them wholeheartedly. Meanwhile, a number of mourners ranging from neighbours, Pirates supporters and members of local football clubs are flocking to Meyiwa's home in Umlazi's K Section south of KwaZulu-Natal. They have all described him as a humble person who had a good heart and loved his neighbours. Irvin Khoza, Mashaba pay tribute to Senzo Meyiwa:Monday 27 October 2014. Irvin Khoza addressing the media at Rand Stadium. 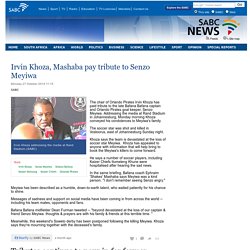 (SABC) The chair of Orlando Pirates Irvin Khoza has paid tribute to the late Bafana Bafana captain and Orlando Pirates goal keeper, Senzo Meyiwa. Addressing the media at Rand Stadium in Johannesburg, Monday morning Khoza conveyed his condolences to Meyiwa's family. The soccer star was shot and killed in Vosloorus, east of Johannesburg Sunday night. Khoza says the team is devastated at the loss of soccer star Meyiwa. He says a number of soccer players, including Kaizer Chiefs Itumeleng Khune were hospitalised after hearing the sad news. 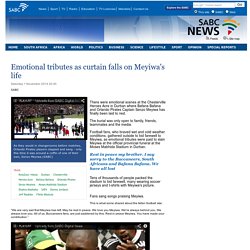 Meyiwa had a big heart: Soccer analyst :Tuesday 28 October 2014. Police say no one has been arrested yet for Senzo Meyiwa's murder. 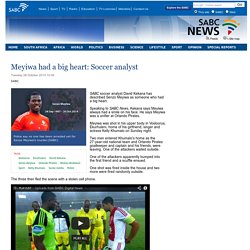 (SABC) SABC soccer analyst David Kekana has described Senzo Meyiwa as someone who had a big heart. Speaking to SABC News, Kekana says Meyiwa always had a smile on his face. He says Meyiwa was a unifier at Orlando Pirates. Meyiwa was shot in his upper body in Vosloorus, Ekurhuleni, home of his girlfriend, singer and actress Kelly Khumalo on Sunday night. One of the attackers apparently bumped into the first friend and a scuffle ensued. One shot was fired inside the house and two more were fired randomly outside. The three then fled the scene with a stolen cell phone. Earlier on Morning Live, Orlando Pirates spokesperson Mickey Modisane appealed to people on social media to stop being judgemental concerning Meyiwa's killing. Modisane said people should allow the police to conduct their investigations and give the family time to grieve.

Meyiwa jersey to be retired:Tuesday 28 October 2014. Senzo Meyiwa joined the Pirates academy as a 13-year-old. 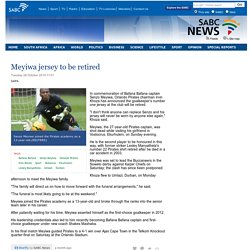 (REUTERS) In commemoration of Bafana Bafana captain Senzo Meyiwa, Orlando Pirates chairman Irvin Khoza has announced the goalkeeper's number one jersey at the club will be retired. "I don't think anyone can replace Senzo and his jersey will never be worn by anyone else again," Khoza said. SAPS under pressure in Meyiwa case: ISS:Wednesday 29 October 2014. Senzo Meyiwa was shot dead in Vosloorus, Ekurhuleni, while visiting his girlfriend. 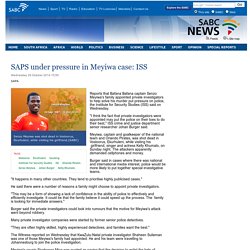 (SABC) Reports that Bafana Bafana captain Senzo Meyiwa's family appointed private investigators to help solve his murder put pressure on police, the Institute for Security Studies (ISS) said on Wednesday. "I think the fact that private investigators were appointed may put the police on their toes to do their best," ISS crime and justice department senior researcher Johan Burger said. Meyiwa, captain and goalkeeper of the national team and Orlando Pirates, was shot dead in Vosloorus, Ekurhuleni, while visiting his girlfriend, singer and actress Kelly Khumalo, on Sunday night. 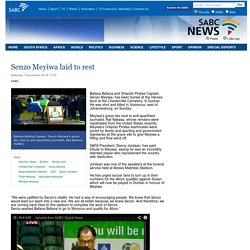 (SABC) Bafana Bafana and Orlando Pirates Captain, Senzo Meyiwa, has been buried at the Heroes Acre at the Chesterville Cemetery, in Durban. He was shot and killed in Vosloorus, east of Johannesburg, on Sunday. Meyiwa's grave lies next to anti-aparthied journalist, Nat Nakasa, whose remains were repatriated from the United States recently. Meyiwa's Orlando Pirates teammates were joined by family and sporting and government dignitaries at the grave site to give Meyiwa a fitting and final send off.

SAFA President, Danny Jordaan, has paid tribute to Meyiwa, saying he was an incredibly talented player who represented the country with distinction. Jordaan was one of the speakers at the funeral service held at Moses Mabhida Stadium. He has urged soccer fans to turn up in their numbers for the Afcon qualifier against Sudan, which will now be played in Durban in honour of Meyiwa. #NotSenzosDad trends high on Twitter (with images, tweets) · sabcnewsonline.